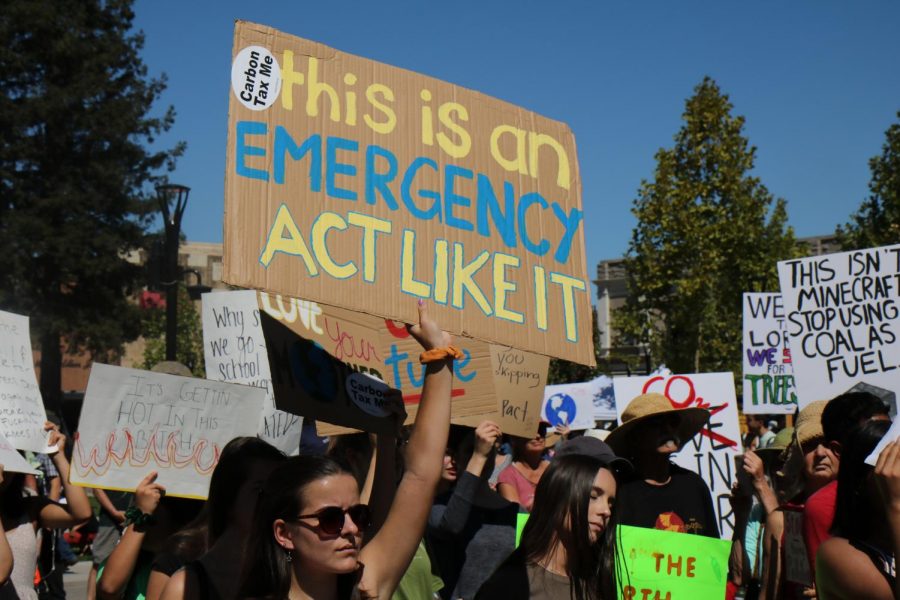 Approximately 2,000 people marched at noon Friday on Courthouse Square in Santa Rosa in solidarity with students and activists across the country to demand serious action on climate change. The rally lasted about two hours.

The majority of those gathered in Santa Rosa were students on strike from all across the city and county.

A smaller strike occurred at Santa Rosa Junior College before the participants marched to the larger event at Courthouse Square. Hampered by technical difficulties, the campus speakers struggled to make themselves heard during an indigenous sage-burning ceremony. An Aztec drummer and dancing troupe brought the event back on track and led the procession down Mendocino Avenue to Courthouse Square.

“No more coal! No more oil! Keep that carbon in the soil!” students shouted in unison from atop the SRJC sign in front of campus.

Other students chanted, “Climate change is not a lie! Please don’t let our planet die!”

According to Forrester, safety was the primary concern for coordinators. Many of the participants were minors and undocumented immigrants, and coordinators felt the utmost concern for their security.

Sophia Porter, former vice president of sustainability for Student Government Assembly, was also enthusiastic with the turnout. She spoke at Courthouse Square.

“It was incredibly inspiring. We always hope for the best, and the best turned out,” she said.

Still, Porter wished  for a larger indigenous influence. She said that oftentimes climate change is seen as a white liberal issue when it’s so much bigger than that. “[Climate change] affects minorities and vulnerable populations the most,” she said.

He also added, “the world is unhealthy and people are unhealthy,” and asserted that could be addressed by “living in tune with the Earth.”

Despite the mostly positive energy of the rally, there were some dark undercurrents.

Chris Little, 41, attended the rally with a friend, wearing a “Guy Fawkes” mask associated with hacker group Anonymous. Though he was happy to see growing enthusiasm for “an issue that affects all of us,” he still expressed doubts.

He noted that despite not having children, he still cares about the environment, even though it doesn’t deeply affect his future. “It’s hard to believe people who have kids and grandkids aren’t more involved in this.”