Board of Trustees advances student housing 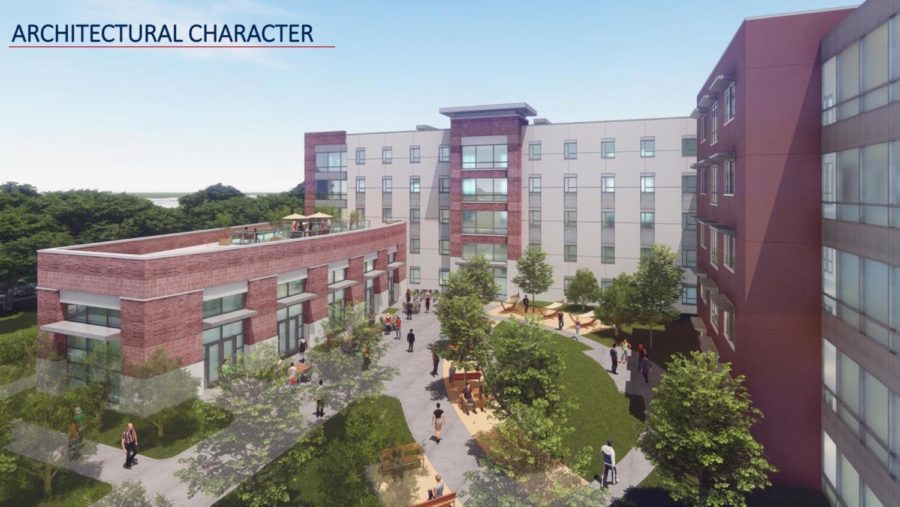 Housing developer Servitas presented to the Santa Rosa Junior College Board of Trustees Tuesday afternoon final plans for a 360-bed student housing building to be completed by August 2022.

Representatives from the three companies that will collaborate to complete the project spoke at the meeting. Employees from Servitas, the developer and site manager; HPI Architecture, the firm that designed the structure; and Wright Contracting, the general contractor that will construct the building answered questions on topics ranging from materials to safety in front of an audience of 20 people in the Girvin Student Activities Center Tuesday afternoon.

“This is really going to reshape the entire campus,” Board of Trustees President Jordan Burns said. “This is going to turn the campus from a 6 to 7 a.m. to 10 p.m. campus into a 24-hour campus.”

SRJC board of trustees members met with potential developers for months prior to the recent decision to choose Servitas, a collegiate services company. The company has completed similar projects ranging from 100 to 3,000-bed dormitories including an 812-bed student housing complex for Orange Coast Community College in Costa Mesa, Calif.

According to Angel Rivera, vice president of real estate development for Servitas, the Orange Coast development prepared Servitas well for SRJC’s project because it required a functional financial and operating structure that they are re-utilizing.

Not only will Servitas fill the role of developer, it will also operate as building manager, something Rivera says will be able to ensure students get the most out of on-campus housing.

“The closer that we can work hand-in-hand with the institution, the better experience the residents will get,” Rivera said.

According to Servitas, the average rent for the apartments will be 6% below market average. The company also says three-fourths of the rooms will fall in the $750 to $900 per month range.

The building will have 230 units to accommodate up to 360 residents across five stories, and it will include community kitchens, study rooms, a rooftop terrace, a game room and a multipurpose room.

Board members identified access to food as an area of possible improvement for the project. Existing plans do not include any dining commons, with no mention of extending the campus cafeteria hours. Residents would have to rely solely on community kitchens or neighborhood eateries when the campus cafeteria is closed.

SRJC President Frank Chong said the college is taking steps to address the potential dining problem. He said the administration is communicating with the SRJC cafeteria food company.

“We have talked to Fresh and Natural preliminarily about meal plans and also about the possibility of food trucks,” Chong said.

After the meeting, Burns explained that the current cafeteria food service company’s contract will intentionally end in 2022 to allow for a new company to step in. He said the board planned to entertain new food service bids at that time that offer options for meal plans focused on the new student housing residents.

SRJC architecture student Austyn Rebich, 32, has attended the college since 2005 and was concerned about housing options for students who are not single. She asked the Board of Trustees if they had any plans to address that concern.

“Is there a plan for students that have small families in the future of the residents?” Rebich asked.

The board was unable to provide an answer, but Board President Burns understood her concern. Burns said he had the same question and planned to find a way of answering it in the near future.

Fire safety and building security were also questioned during the meeting.

According to Servitas, the building has three stairwells: one open-access central stairwell and two emergency stairwells in the far wings of the building. Servitas will provide locks and cameras, while campus police will manage patrols, but plans are open to further discussion  while the building is under construction.

Servitas begins pre-development and pre-construction in early May.

“[Steel stud] allows us the most economical solution to a five-story building, which minimizes the footprint on the site, leaving more room for parking and common space,” Nonella said. “It’s a manufactured product, it’s uniform, it’s precise, it’s exact, it’s consistent [and] the individual units can be ordered to length to minimize waste.”

HPI senior architect Larry Frapwell said his company is “excited to have the opportunity to work with the college and further the design approach to make sure that [the housing project] is responsive to your students.”

Dean of Students Robert Ethington has been advocating for student housing since he began his tenure at SRJC.

“It’s one of the best things that has happened in my 20 years here,” Ethington said about the approval of the student housing.

Ethington believes there is a connection between scholastic education and learning through experience in a community, and he hopes the students who live in the new dorms will benefit from the arrangement.

“If you add housing to what we already provide with the student center and the intercultural center that is going in here, I think students are [going to be] getting a more comprehensive student-life experience and an opportunity to learn things both in and outside the classroom,” Ethington said.