Take Back the Night revitalized on SRJC’s Santa Rosa campus 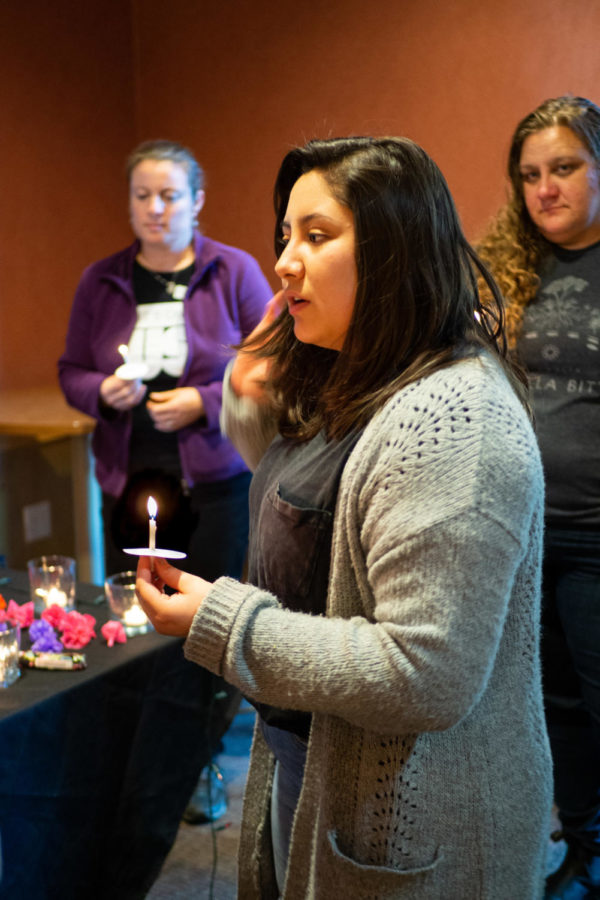 "Take Back the Night" host Jocelyn Toscano prepares for a moment of silence during a candle light vigil in honor of sexual assault survivors, March 27 in the Student Activities Center.

Silence filled the room for a brief moment as a group of candle-bearing students and faculty revived Take Back the Night and paused to acknowledge the strength and suffering of survivors of sexual violence. Before them stood a vigil table, upon which lay eight printed stories from sexual assault survivors, flowers, flickering tea candles, smooth flat rocks and a flowing miniature waterfall.

Vice President of student life Jocelyn Toscano was responsible for revitalizing the event, which was not held on campus last year. The Student Life Committee, SRJC PEERS Coalition and Student Psychological Services worked together to host the vigil which was attended by 14 people on March 27 in Santa Rosa Junior College Student Activities Center.

Afterwards, Toscano explained how difficult it was to share the stories from several sexual assault victims in front of the audience.

“When I was saying them out loud I was holding back crying,” Toscano said.

Take Back the Night Foundation, an international non-profit organization, aims to “create safe communities and respectful relationships through awareness events and initiatives. [They] seek to end sexual assault, domestic violence, dating violence, sexual abuse and all forms of sexual violence,” according to its website.

“Take Back the Night” was a precursor to Sexual Assault Awareness Month which takes place in April.

Unfortunately, the event was also timely because it took place almost 2 weeks after a female SRJC student was reportedly sexually assaulted in a bathroom at the Mahone Library on the Petaluma Campus.

Manager of Student Life and Engagement Hillary Zarate stressed the importance of events like these. “I think people really want to talk and share their experiences and support each other to make healthy decisions,” Zarate said.

Anticipating severe emotional reactions, Zarate and the Student Life Committee made sure members of Student Psychological Services (SPS) attended the gathering. SPS was part of the “cozy corner,” a quiet area with bean bags, colored lights and a student therapist available to comfort anyone who was triggered by the traumatic stories.

Several members of SRJC’s People Encouraging Each Other to Realize Success (PEERS) coalition attended and provided information on dealing with trauma. They also created a paper chain out of attendees’ signed commitments to ask for consent.

“I think it’s nice that we have an atmosphere where people feel comfortable enough with each other to take pride in their recovery,” Garcia said.

Take Back the Night was designed to educate people on the issues of sexual assault and consent in an effort to empower women to feel safer at night, according to Toscano. Toscano worked hard to bring back the event, which was not held in 2018.

“I know lots of friends who have gone through similar things. Lots of people have confided in me. I’m putting it on for those people,” Toscano said.

To clarify what sexual consent should be like, Toscano played an animated video where initiating sex was compared to offering someone a cup of tea.

After the event, Vice President of Health Enrique Garcia reflected on the story he’d shared about how his friend became a sexual assault survivor. “It makes me feel proud to talk about it, just knowing how strong they were to get over it and how quickly they were able to,” Garcia said.

SRJC student Fiona Barbolack, 22, was impacted by the vigil and the stories that were shared. “I think it was really powerful hearing all of the stories,” she said.

SRJC business administration major Bryan Rivera, 21, said sexual assault is “a heavy topic” and “everyone is affected by it. It’s a common thing.” Rivera also discussed how Student Life could have increased the number of attendees. “If they made it earlier in the middle of the day, I promise you people would be stacked in here,” he said.

SRJC physics major Morgan Martinelli, 21, commented on the attendance as well. “There would be more exposure if it was earlier,” he said. “People would walk by and see the sign.”

Toscano and Zarate plan to have SJRC Student Life host the event each year in order to maintain awareness of sexual assault and consent while also providing a safe place for survivors to speak out.

SPS encourages students to attend a drop-in session if they have been affected by the emotionally charged topics at “Take Back the Night” or the sexual assault incident on the SRJC Petaluma campus. Drop-in sessions are Monday through Thursday at 11 a.m. and Fridays at 2 p.m. in the room 4017 of the Race Building on the Santa Rosa campus, and Monday and Wednesdays at 2 p.m. in room 610 of the Call Building on the Petaluma Campus.