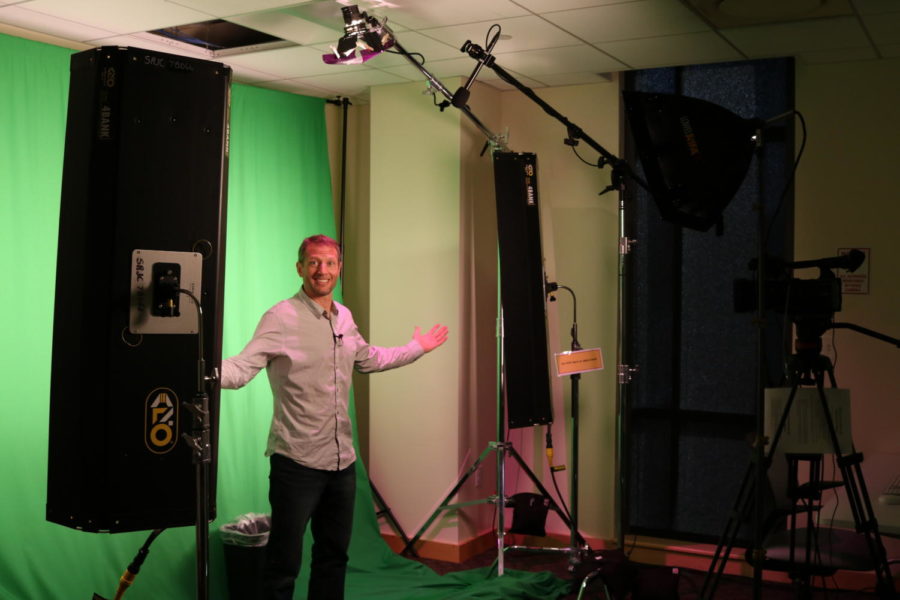 Digital filmmaking instructor Brian Antonsen shows off the one switch lighting in the green screen room.

Faculty across several overlapping departments are hoping the new Digital Media Suites at Doyle library on the Santa Rosa campus will become “sticky spaces”—places where students will hang around to collaborate and meet students from other programs that work with digital media in its many forms.

Access to tools is a key component of the hands on learning required for digital media creation of all kinds, something students at most community colleges only have during classroom hours, and never without an instructor present.

The suites are open the same hours as the library, and qualified students can utilize the rooms up to three hours per day. Time blocks can be reserved online just like a study room.

They offer a collection of multimedia tools for web, archit

ecture and game design, plus both audio and video production and post-production.

The rooms include: a chroma key, or green screen, room complete with one-button preset camera and lighting, a virtual reality (VR) room with a bank of VR-capable PCs, an audio recording studio and mixing room, a small photography studio designed with product photos for advertising in mind, an editing bay with several Mac computers loaded to the gills with software, and a 4K viewing room with surround sound for checking out the cinema and audio quality of student productions.

While the suites are open for use anytime the library is open, instructors control access for the suites based on their class rosters, ensuring that only students with basic working knowledge of the equipment and applications are allowed to use them. The rooms are for work that feels like play, not for playing around.

Primary access is for students currently enrolled in a number of media-specific classes that teach students how to use the equipment properly. Admittance is granted on a case-by-case basis to students with qualifying experience, with approval from their department’s instructor in charge.

Classes span a number of departments: music, computer science, digital filmmaking and studio production, multimedia journalism, engineering and applied technology and more. Some students may be grandfathered in from previous classes or vetted by a qualified instructor. A complete list of classes is unavailable at this time, but interested students should contact their instructors to inquire about getting on the list.

Approval is dependent on the student’s experience with the equipment involved. For example, AutoCAD students aren’t going to have access to the recording studio, and video production students won’t get to play with the VR equipment. That doesn’t mean that they can’t work together, it just defines who is in charge of which piece of the puzzle.

Production work is not limited to assignments for class.

“The philosophy in the United States about public libraries is that we protect your privacy. We don’t ask people what they’re doing when they’re using the computer, so I think it will be the same way with the media suites,” said Nancy Persons, the library liaison for the faculty involved in the planning process.

Robert Grandmaison works with design and architecture students. “When students are [designing] buildings inside of Revit, they can actually put on a VR headset and step inside of their buildings while they’re being designed and see what their rooms and spaces feel like.”

It has been a two year process to make these suites available from the first multi-departmental meetings to discuss possibilities to finding funding, making a plan and completing construction. According to Brian Antonson, Grandmaison and Persons, the process from planning to the soft opening back in January was quite the ride. “It was at times arduous and at times painless,” Grandmaison said.

It is unprecedented for a school library to house such technology for community college students, according to Persons, and she is enthusiastic about the suites location in  Doyle. “People still have a lot of old fashioned ideas about libraries, but we aren’t really operating that way and haven’t been in a long time,” she said.

While librarians don’t have any role in teaching students how to use any of the equipment or programs in any of the rooms, they are happy to be the guardians of student opportunities. “[Students working with digital media] historically haven’t had a place to go to practice or do their homework…so we just carved out some space and offered it up,” Persons said.

Students check in at the Tech Gear desk on the second floor of Doyle, where library workers will check the roster and the schedule for the requested room, determine if there is any equipment the student will need to check out in order to use the room like handset controllers for VR, microphones, etc., and unlock the room.

Rooms are available for drop-in use, but priority is given to those who reserve online if availability is limited.

“There are things that we were trying to do that we accomplished, some things that I wish we could have accomplished that we weren’t able to, but this is an evolutionary process. This is the first time that we’ve ever had VR on campus that I’m aware of, so I’m pretty happy with the way things have turned out,” Grandmaison said.

Antonson agreed. “I originally wanted the screening space to be a 30-seat-theater,” he said. Budget limitations led to nine comfy chairs in a room that shares a non-soundproofed wall with the recording studio, but Antonson was happy to get a 4K screen and surround sound.

Nobody knows yet which rooms will get the most use, or what students will gravitate towards when choosing upcoming classes.

“I’m just curious what the need is gonna be,” Antonson said.