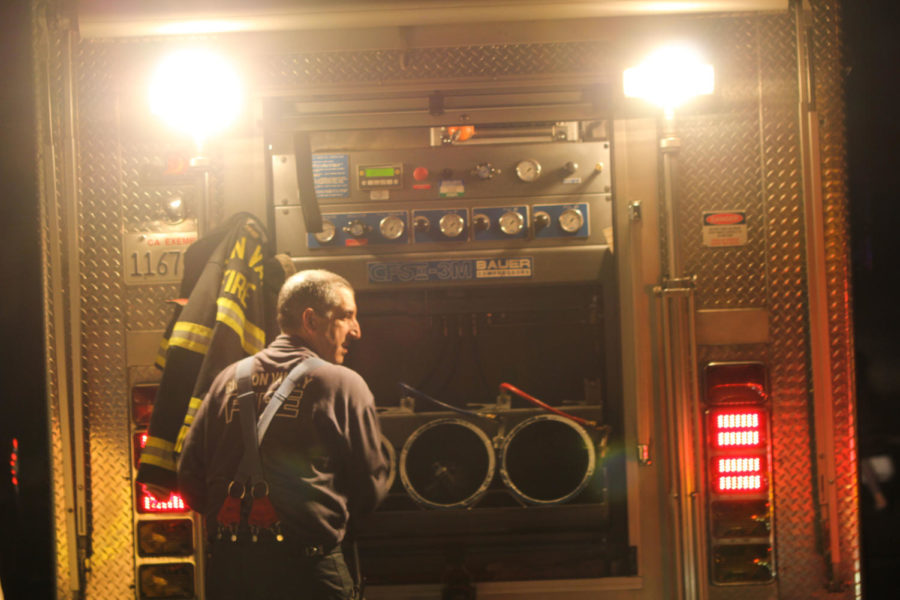 Approximately 11 units of firefighters arrive on scene minutes after the 911 call was made.

This was the thought Samantha Rivas, 17, had as she first saw flames engulf the upper story of her apartment complex.

Rivas has lived at the apartment complex for three-and-a-half years and is used to consistent false alarms.

“These occur at least twice a month,” she said.

The three-story apartment fire at 1333 W. Steele Lane near Coddingtown Mall in Santa Rosa displaced 140 residents and forced some to jump from windows Thursday evening.

Battalion Chief Ken Sebastiani said the apartment complex was a bad building for fires because of a lack of a sprinkler system and building design, and a total of 11 units were dispatched after it was deemed a second-alarm structure fire with reports of people trapped.

“When we got reports of people trapped, we went into ‘rescue mode’,” Sebastiani said. “We used ladders and pulled people from windows.”

Kyle Nelson, 28, was wearing headphones when the fire alarms went off. He only heard something was wrong when residents began to yell “fire.”

“I had to jump out of the window from the second floor. I left my phone. All I have is my wallet and my keys,” Nelson said.

Paramedics attended to Nelson shortly after for smoke inhalation.

Forty-five minutes later firefighters entered the scorched units and cleared debris and tossed smouldering books and other burnt objects out the windows while dozens of residents gathered in the lobby to await Red Cross’s arrival.

Joe Clendenin, a Red Cross operative, arrived on scene at 8:40 p.m. “Many of the 140 displaced residents will be sent to the tentative shelter near Finley Park,” he said.

Chris Gossner, a paramedic supervisor, explained that it was likely the Red Cross would open a community center with cots.

“Because utilities are being shut off, residents are being displaced,” Gossner said

Red Cross associates were not allowing pets into the shelters, leaving many to worry where to put the recently rescued pets.

Rivas and her family were considering a hotel because of their three cats. Others without animals were planning to stay at the Red Cross shelter.

Power and gas will remain shut off while officials investigate the source of the fire.