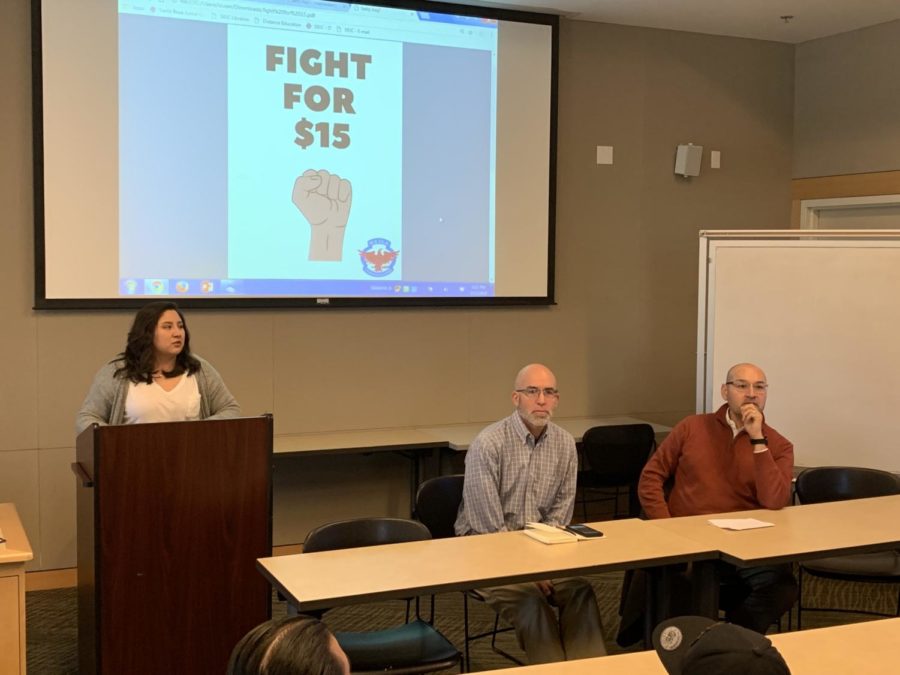 Update: According to MEChA advisor Rafael Vázquez, the SRJC Board of Trustees will seek to approve their proposal of an increase in student-employee wages, despite MEChA’s declination to support the offer.

Movimiento Estudiantil Chicano de Aztlán (MEChA) declined an offer from the Santa Rosa Junior College administration to incrementally increase student-worker wages to $15 over the next 15 months March 11 in the Bertolini Student Center.

Pedro Avila, vice president of student services, proposed a pre-approved plan from the Board of Trustees to MEChA. The plan guaranteed an increase to $13 in April and to $14 in July. According to Avila, the board’s goal is to find enough money in the budget to reach $15 by July 2020.

But MEChA’s members have agreed they will not settle for less than $15 an hour and their goal remains the same now as it was in November 2018, when the “fight for $15” began.

The club was dissatisfied that the administration proposed a plan that would not immediately get to $15, nor would it guarantee student employees’ hours or staff sizes.

MEChA responded directly to the administration in a statement to The Oak Leaf after the meeting:

“MEChA thanks the administrators for giving us their time and reporting back on their decision, but we politely decline. We are disappointed to hear that the administration is not complying with our demand of a $15-hour wage, and we are increasingly more disappointed that they resort to intimidation tactics of making the students fear for their hours being cut. Because of this [suggested] increase, either their hours could be cut or students themselves could be out of a job. We will continue to persist and fight for 15, and hopefully next time we will get to speak directly to Dr. [Frank] Chong.”

MEChA co-chair Jocelyn Toscano directed the 20-minute meeting and encouraged the 10 students in attendance to engage the two attending administrators.

Gabriel Cunha, a Brazilian SRJC student, expressed concern about a potential decrease in hours. Laws limit international students to a 20-hour work week, only on the campus of the school they attend.

“This is the only choice I have, working at the JC. I believe it could be moving quicker,” Cunha said about the speed at which the administration is addressing the student wage increase.

“Why wait until the following budget decision?” she asked the administrators referring to the year it would take to increase wages from $14 to $15 an hour.

“We need more time to figure out where the money is coming from,” Avila said. He explained how the increase to $14 can be budgeted now, while the next dollar will take longer.

Avila also responded to students concerns about a reduction of hours.

“To commit that one hundred percent of the raise is going to come from not eliminating hours, I can’t do that right now,” he said. “It would be huge commitment given the type of deficit that we’ve been dealing with.”

“I also want a commitment that we are not reducing hours, so that the wage increase will be for that are being worked right now,” he said.

Avila was unable to commit to Hale’s request, because the administration is unsure what the budget will look like in a year. He explained that non-student SRJC employee positions are getting eliminated, despite some staff raises and cost-of-living increases.

“I would encourage the administration to reach out to Sonoma Valley District, because they just set a $15 minimum wage,” Hale responded.

Dean of Students Robert Ethington, the second administrator on the panel, described the SRJC budget issue and the students’ fight for a pay increase as common occurrences.

“This is a smaller version of an issue that people are dealing with all over the country in different places at institutions,” he said.

Ethington also assured the students that the administration focuses a majority of their daily budget decisions.

“I talked to [Avila] today about how we preserve money for student events, activities services and all the things in the student services world,” he said. “This a 2-for-1: students are learning about advocacy and activism while making a difference.”

Ethington also said he hopes MEChA and the other advocates are aware of the impact they are having, even if some of their progress feels small in the moment.

Toscano is not ready to give up on getting $15 for all the student-workers, despite the fact that administrators are telling MEChA it’s the best offer they can make. According to Toscano, MEChA is empowered by support from student government and is prepared to take further steps.

“SGA endorses and supports the ‘fight for 15.’ We are going to make a list of demands and we have already created an ad-hoc committee,” Toscano said.

MEChA will continue to host public debates over the “fight for $15”.