MEChA continues its fight for 15 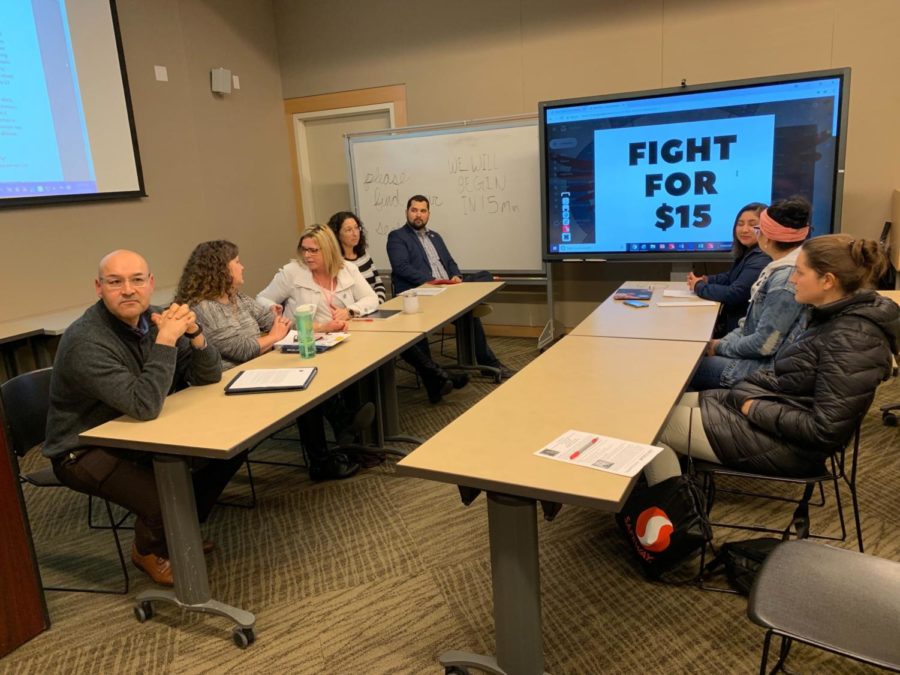 A  Santa Rosa Junior College’s administrator told Movimiento Estudiantil Chicano de Aztlán (MEChA) the cost to increase all student-employee wages would be too expensive due to current budget cuts.

Kate Jolley, interim vice president of SRJC’s Financial and Administration Services, said the price to increase student pay from $12 to $15 would be $485,000 per year.

“We are looking at cuts of over $10 million in the next four years,” Jolley said. Finding half a million dollars per year to raise student-employee wages would be difficult, Jolley said.

Since November of 2018, MEChA has invited SRJC President Dr. Frank Chong and other administration officials to several of their weekly meetings to discuss raising the student-employee minimum wage to $15.

The club has not received any sign of a compromise from the administrators thus far and are not satisfied with the administration’s continued suggestions for scholarships to offset the student employee wage.

MEChA representatives attended last month’s Board of Trustees meeting to advocate for a student wage increase, despite the fact that the board had publicly announced it would ask tenured faculty to retire as part of a plan to save the school money.

Chong’s absence at the meeting surprised MEChA members, but didn’t deter their efforts to persuade the five ranking SRJC administrative officials in attendance that the student-employee minimum wage should be raised to $15.

Fifteen students attended the meeting to ask questions and support MEChA as it responded to information the officials provided.

Jocelyn Toscano, chair of MEChA and vice president of Student Life, expressed disappointment with the lack of a clear plan from the officials who attended their club meeting.

“I believe it was very political; very much a roundabout, trying to avoid answering the question, with promises of potential rewards,” Toscano said about the meeting.

Toscano tried to get a clear answer to the MEChA question she’d introduced at a previous meeting: How much money would SRJC save from the Supplemental Early Retirement Plan?

There are too many unknowns to afford a clear answer to that question. SERP was chosen because it will be profitable, but there are no clear indications of how many staff members are willing to accept the plan or how much will be saved from each retiree, according to Jolley.

Pedro Avila, assistant superintendent and vice president of student services, said that 87 percent of the SRJC budget goes toward all employees of the school. According to Avila, the remainder of the budget offers little room for adjustment.

“Part of this conversation is, I think, for all of us to understand what the challenges are in the budget,” Avila said. He explained how student services’ goal is not just to give out numbers but to also learn how the budget impacts students personally.

According to Avila, the administrators has a plan to reach the $15, but it would not happen all at once. At the next MEChA meeting they intend to share their plan and ask for input from those attending the meeting, he said.

MEChA member and student-employee Abril Barbosa spoke from personal experience. She said students are suffering more than administors and staff. Like most of the MEChA members in attendance, Barbosa wanted some constructive answers.

Michael Hale, an English professor and former student-employee, spoke about how impactful working on campus can be. He advocated for the $15 minimum student wage because he believes students should want to work on campus.

“My ability to accelerate my college success was the ability to stay on campus,” Hale said. “That was the first time I was able to professionalize myself, was that campus job.”

Dean of students Robert Ethington stood up and urged the crowd to travel to the state capitol in March, as part of a previous tradition known as “The March in March,” he said. “Use your voice and the money is there.”

Jordan Burns, president of the Board of Trustees, proposed an idea similar to Ethington’s, urging students to frequently visit local and state officials. The best way to make change is through repetition, according to Burns. He also advised students to attend town hall meetings and events sponsored by local officials.

“It was really nice to listen to the different individual stories that each student had and the struggles they are having,” Burns said after the meeting.

Student Trustee Robert Martinez explained that it’s important to remember that a large part of the wage argument has to do with international students who are legally allowed to work only on campus. He said that he wished this issue was already taken care of but acknowledged the administration’s budget issues. He also said that the meeting went well and commended the good communication exhibited by all parties.

“I personally feel like everyone was listened to, and that’s an important part of this,” Martinez said.

According to Toscano, what the club does at the college impacts the community by putting pressure on local business to raise their minimum wages too. She wants the administration to know that the club may have to do something to demonstrate why the student workers are imperative to the SRJC and deserve the full $15 per hour.

“As we are having this conversation, we are trying to be civil, and If they don’t respond back with what we deserve we will take further action,” Toscano said. She believes it’s necessary to put pressure on the administrators or the work of current MEChA students will fade away when they transfer.

Rafael Vázquez, a criminology and psychology instructor, MEChA advisor and Extended Opportunities and Programs coordinator, said that the national MEChA organization has been advocating for justice since the ‘60s and won’t stop, regardless of SRJC’s official decision.

According to Toscano, MEChA still seeks 100 student signatures on its “fight for $15” petition in order to reach its goal of 1,000.

MEChA expects to further discuss the issue with SRJC officials at its next meeting at 5 p.m. March 11 in room 4643 of the Bertolini Student Center.