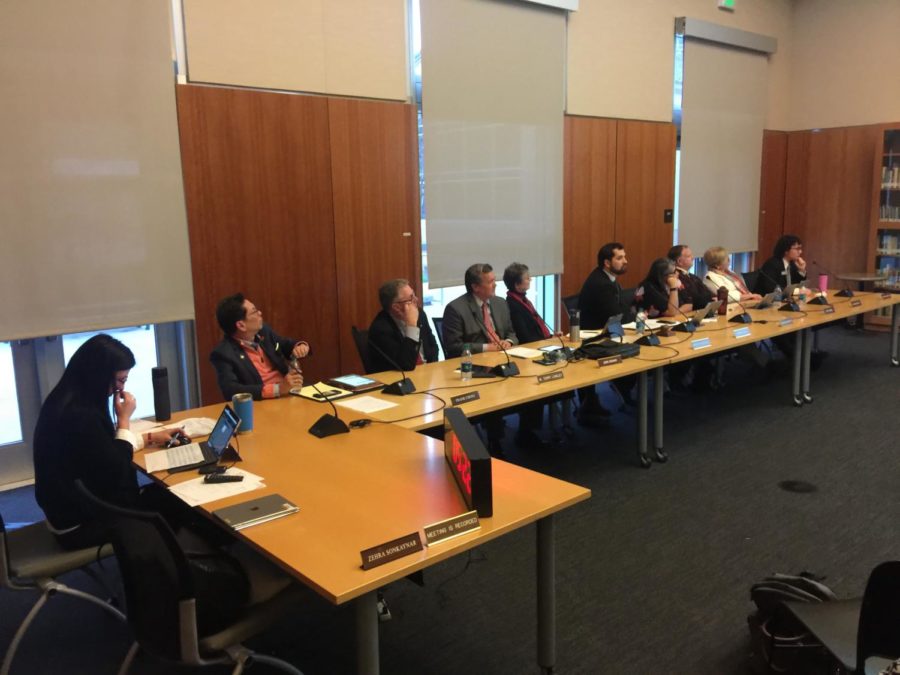 Tuesday's board meeting on SRJC's Petaluma campus where MEChA again requested the administration approve a $3-an-hour raise to student-workers' wages.

A combination of high living expenses, low student-worker wages and a lack of financial aid threatens the academic future of many Santa Rosa Junior College students. To improve their prospects, student-workers will again lobby college officials at Monday’s MEChA meeting for a $3 per hour raise.

This is not student-workers’ first attempt at increasing wages to $15 an hour.

MEChA de SRJC, the student group acting as a union-of-sorts on behalf of student-workers, has already addressed two letters on the topic to SRJC President Dr. Frank Chong.

Their most recent letter, read aloud by Student Trustee Robert Martinez at the Feb. 12 SRJC Board of Trustees meeting in Petaluma, requested Chong’s attendance at this upcoming MEChA Meeting at 5 p.m. Feb. 25 at the Bertolini Student Center. His attendance is expected, but unconfirmed.

The letter reiterated MEChA’s request for the $3-an-hour raise and posed three questions to Chong and the board:

What would the additional cost be to the college by increasing the pay by $3? How much money will the college save if full-time employees choose to retire early? And how can the college change the policy for students to get scholarships even if they are not full time?

MEChA presented its first letter to Chong in December because many student-workers could no longer make enough money working on campus to meet their needs, according to Rafael Vazquez, outreach coordinator for SRJC’s Extended Opportunity Programs and Services (EOPS) and advisor to MEChA for 15 years.

Neither letter resulted in securing the wage increase, but students-workers are hopeful they can start a dialogue to negotiate for change at Monday’s meeting.

Anetra McCartney, 23, an international student who works at the Santa Rosa campus’s Disability Resources Department (DRD), exemplifies many of the issues at play. She works 20 hours a week — the maximum allowed by student-visa law — and attends school full time.

As a foreigner, McCartney pays out-of-state tuition, which she describes as “very high.” Scholarships are her only option for financial aid; the law prohibits her from working off-campus unless it’s a job within her profession, and even then she must take — and pay for— a special class in order to work off-campus.

She described her situation as “like paying to get a job.”

For her and other international students, a raise in wages would take pressure off their families back home.

“It would help tremendously,” said McCartney, whose family lives in the Bahamas and makes less money hourly than she does at her current rate.

Benjamin Gomez, 25, a student worker at EOPS, is a Deferred Action for Childhood Arrivals (DACA) recipient and student who works on campus 24 hours a week. While he does receive a Promise Grant, Gomez is not eligible for additional financial aid.

A wage increase to $15 an hour would allow him to quit his second job and spend more time on his studies.

According to Vazquez, the recent petition by local labor organizers to the city of Santa Rosa for a $15 minimum wage speaks to the gravity of the situation. He says it is not an unreasonable request, given a 2017 California Budget and Policy Project report which calculated $23 an hour as the appropriate living wage for Sonoma County.

“The students are frustrated. How much longer do they have to wait? Should they start looking for another job somewhere else?” Vazquez asked.

“And the other reality is, some of the students are considering dropping out of college and going to work because there’s simply no funding.”