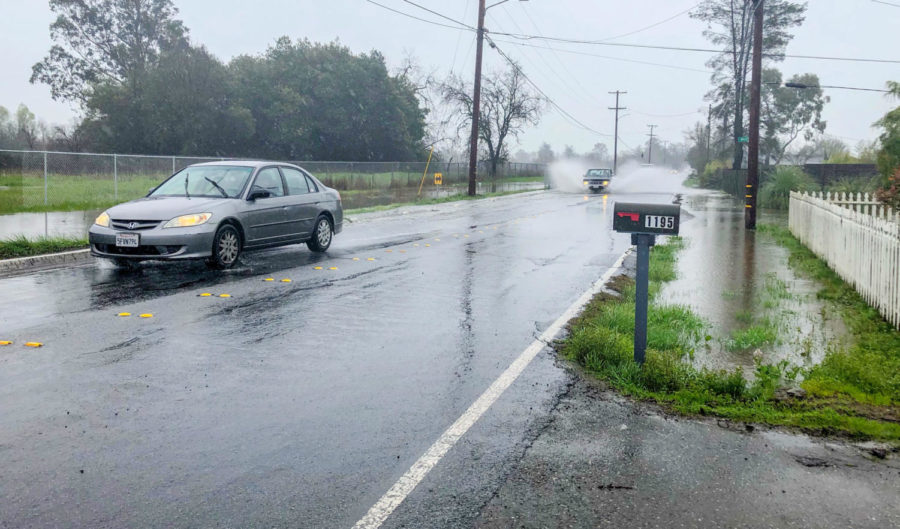 Several roads have been closed in Sonoma County due to flooding, including S. Wright Road and Miles Avenue. Both roads flooded at 12:30 p.m. on Feb 13.

The Sonoma County Sheriff’s Office issued the flood warning today until 8:45 p.m. Thursday for urban areas and streams in Sonoma County and officials expect water levels to rise through the evening.

SRJC President Frank Chong and the Emergency Operations Team sent an email telling students to request an excused absence if they couldn’t attend class safely and told faculty and staff to contact their students through the SRJC Cubby if they planned to cancel class.

On SRJC’s Petaluma Campus, sociology instructor Dr. John Stover warned his students to drive “extra cautiously” due to the dangerous conditions of the roadways.

“[Driving to campus] was intense. I commute from San Francisco and it was the worst commute I’ve had in the two years I’ve been coming here,” Stover said. “Several times my windshield was completely washed out, and I couldn’t see anything in front of me. A car flipped over on the Waldo Grade about 30 minutes after I drove past it. It was dangerous, and it was scary.”

SRJC District Police Chief Robert Brownlee said the primary concern is the Shone Farm campus and it is “very likely” the campus will be closed due to flooding on Trenton-Healdsburg and Eastside roads.

Brownlee also encouraged students to read the driving safety precautions provided in the email and to check the county website for road closures.

“If you have a low-lying vehicle, do not go into areas that are flooded. Instead of cutting 30 minutes from [your trip], you’ll find yourself in a rescue situation,” Brownlee said.

Road closures include stretches of Highway 1 and Stony Point Road and additional warnings were issued on Lakeville Highway and Highway 116.