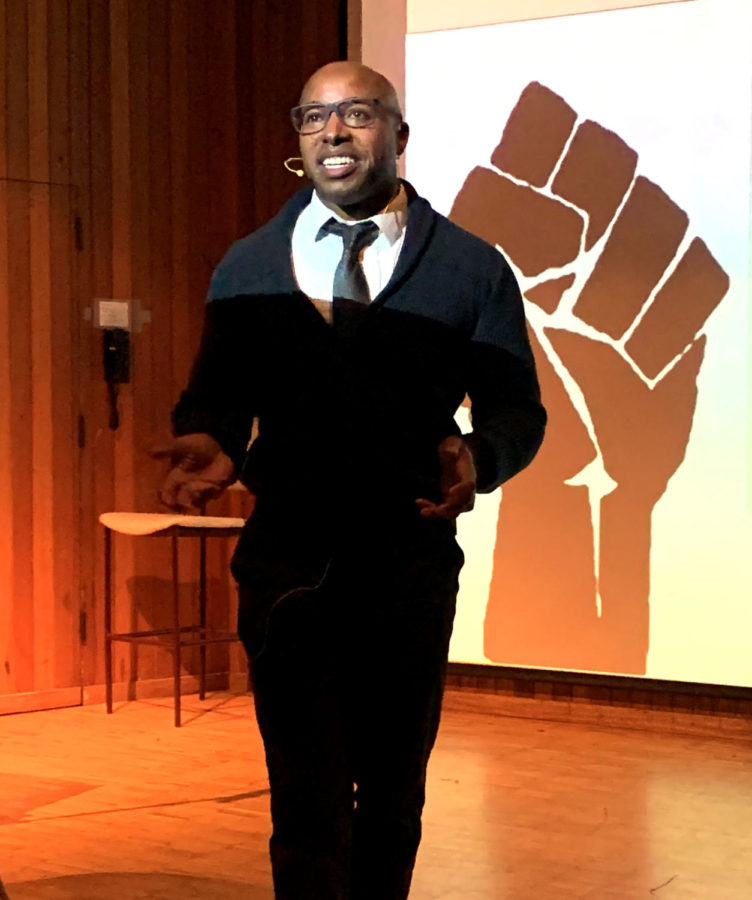 Santa Rosa Junior College social studies instructor Chris Collins speaks about the many forms of resistance toward slavery, in the Newman Auditorium at noon on Monday Feb. 4 2019.

Santa Rosa Junior College social science instructor Chris Collins explored the connection between 19th century slaves’ resistance to bondage and what we can learn from those slaves during his lecture Feb. 4 as part of the Works of Literary Merit series.

The series was held as part of Black History Month observances on SRJC’s Santa Rosa campus. More than 100 students and faculty attended the event.

During the lecture, Collins discussed how slaves used both “covert and overt methods” to push back against their circumstances and how the legacy of their resistance affects us today.

According to Collins, slaves’ efforts to resist were varied. Some slaves broke tools, destroyed crops and mistreated animals. One female slave spent 15 years spitting in her master’s coffee every morning —  unbeknownst to him. Other women took control of their own bodies in protest.

“The bodies of women who were enslaved were used to breed and reproduce the future generations of enslaved people,” Collins said, noting their masters treated the women “and their reproductive organs like cattle.” This dehumanization led female slaves to abort their own fetuses in “covert resistance.” Collins also touched on widely-known resistance efforts including Nat Turner’s rebellion and the Underground Railroad.

He said these early instances of slaves pushing back against societal wrongs influenced the way marginalized people protest their circumstances today.

Santa attended Collins’ lecture, and afterwards spoke about his own arrest and the pressure police exerted on him before his lawyer was present. “I resisted and decided not to sign any papers,” Santa said.

In a second example, Collins spoke of a 17-year-old African-American named RJ who “ended up losing his life to gun violence on the streets of Oakland.”

According to Collins, RJ was escorting home a group of girls when a driver passed and harassed them. RJ “didn’t like the mistreatment that was happening,” Collins said, so he voiced his displeasure with the driver, who then shot and killed RJ in retaliation.

“RJ ended up suffering the consequence of resistance,” he said, but added that RJ’s death was meaningful. “What RJ left behind was a legacy of resistance.”

“A lot of the themes [Collins] talked about connected and related to what we are writing about right now,” Mancillas said. Her classes are reading “Becoming Dr. Q” and “I am Malala,” two books about people of color overcoming adversity and resisting societal oppression.

Although Collins discussed in detail the tragedy of  how slaves were treated, he summed up the true goal of his lecture with the words, “When we have horrible things in our society it is important to acknowledge that they are horrible, but to also talk about the resistance, and to give power and credit to that resistance.”

“We are the legacy of resistance.”