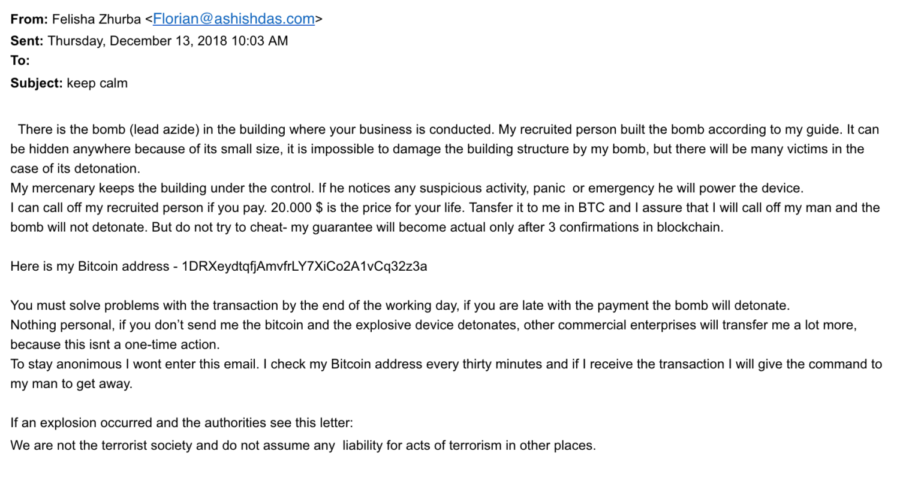 Multiple SRJC employees received a threatening email Thursday morning as part of what police are reporting as a global scam.

Santa Rosa Junior College District Police Chief Robert Brownlee confirmed approximately 10 faculty and staff members received an email directing them to pay $20,000 in Bitcoin to avoid detonation of a bomb supposedly placed in the recipient’s building. SRJC police worked with local and national authorities and quickly determined the threat was “invalid,” according to Brownlee.

“When I initially reviewed the email there were some things that were not specific to SRJC. It was very general, almost like it could it could apply anywhere, so that was my first indication it could be a scam,” he said. “[But] we treat anything like this as a real event.”

According to SRJC information technology, faculty received the email around 10 a.m. Thursday and forwarded it to IT within 15 minutes. By 10:15, IT had instructed all recipients not to respond, blocked the email’s originating site and passed the email to campus police who sent it to the FBI’s Bay Area representative by 10:30.

“The federal government has regional incident areas where they take this information and they process it. And they were receiving [notice of the email] nationwide,” Brownlee said, noting that the email’s misspelling, poor grammar and widening distribution indicated it was a scam. “It started adding up pretty quickly there was no validity behind this threat.”

SRJC Senior Director of IT Scott Conrad said ransomware scams of this type peak around the holidays and urged SRJC students, faculty and staff to forward any suspicious emails to the SRJC help desk for vetting.