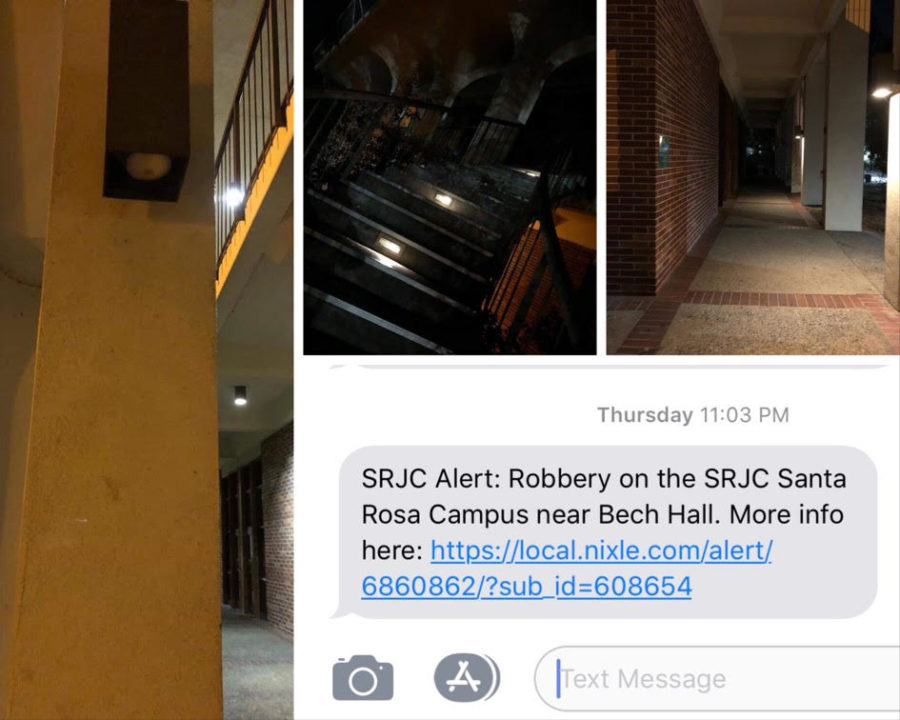 Faculty members questioned why they were not promptly notified of an armed robbery near Bech Hall Thursday evening that took place when some had classes in session.

District Police sent an advisory at 10:42 p.m., two-and-a-half hours after the 8:14 p.m. incident in which a female student reported that two men robbed her at gunpoint moments after she left a Bech Hall class. SRJC Police searched the campus but did not arrest any suspects.

“What I don’t understand is why we were not alerted to this last night. I was teaching a class at the same time nearby and students were leaving between 8:30 and 9 o’clock,” said physics instructor Lynda Williams in an email to the campus.

“After the police officers came to the scene, there should have been an immediate alert sent out to faculty, staff and students to inform us to avoid that area or be cautious when leaving classes or going to cars, because there are possibly armed robbers on campus!” Williams said.

“If I felt there was an immediate danger to anyone on campus, it would’ve gone out,” Brownlee said. “With the information we had at that time, it didn’t meet that criteria because of the search, because of the victim’s statements that the suspects fled the area and the fact that we not only searched the immediate area but also the whole campus.”

“My evening class is in Barnett, which has a huge bank of windows on one side and an unlocked door on the other. I suppose anyone wanting to come in and rob my whole class could do so once they see us all in there like sitting ducks. I never thought of that before,” wrote Hollyahna Vettori, an ESL faculty member who was in the area on Thursday night.

Instructors also noted that many of their students left class and returned to their cars unaware of the robbery.

“At 9:30 p.m. I was walking out with three female students. Two walked away together and one lit out by herself in the opposite direction. I called after her to be careful, but if we had known what had gone down earlier, we would have obviously taken more precautions,” Vettori said.

Laura Sparks, an astronomy instructor, had a class Thursday evening in Lark Hall, adjacent to Bech Hall, where the robbery occurred. Sparks noted that the doors to Lark Hall can only be locked from the outside with a key.

“There was a class full of students in exactly the area the muggers ran toward,” Sparks said. “The individuals involved were not apprehended, so to the best of anyone’s knowledge they could have been on campus still, or could have returned to campus later.”

With an alert, instructors could have taken precautions to ensure the safety of their students, she said.

“The challenge is you have a 100-year-old campus. You have brand new buildings that have all this great tech in it, but you still have these old structures, and the infrastructure just isn’t there to have some of these things,” Chief Brownlee said. “We’ve been discussing campus security for some time now. This event has sparked that conversation in the faculty, in the staff, but we’ve been looking at it from the totality of everything.”

“Please, let’s remember to include the Southwest Center in this discussion. We have classes there six nights a week, and it is very isolated (and scary at night).”

Erin Sullivan, chair of the Petaluma Faculty Forum, voiced her concerns about that campus’ safety, citing instructors’ inability to lock their own classrooms, the lack of a dedicated officer for the Petaluma campus and a general absence of safety training.

SRJC’s Student Government Assembly addressed the growing concerns by scheduling a series of campus walks. The walks will check areas that are not monitored or well lit, and are planned for the Petaluma campus, the Public Safety Center, the Southwest Center and the Santa Rosa campus.

Rafael Vasquez, an Extended Opportunity Programs & Services coordinator, said he walks around campus at night to decompress. In a campus-wide email, he wrote that he counted 22 lights out on the bottom floor of Emeritus Hall, 24 out on the top floor and a couple out on the south side steps. “And I ask myself why nobody sees this as a major safety concern?”

Vasquez agrees that cameras are a step in the right direction, but they are only a half-measure when the lights aren’t working. He documented many dark areas near cameras around Bertolini. “The elevator on the first floor is very dark because the light is out and someone could easily hide in that area.The light has been out for a while. There is camera above it, but wouldn’t capture much if there is no light.”

Vasquez said the lights around Bertolini used to turn on every night. In photos he took, three lights on the west side, facing the library, are not on. “Another camera is there, but wouldn’t capture an assault since there is no light,” he said.

An employee for 22 years, Vasquez said he has complained multiple times about lighting issues on campus.

Humanities instructor Emily Schmidt said she cannot lock her office or classroom doors from the inside and brought her concerns to administration in the wake of the Parkland massacre. “I’m an adjunct,” she said. “This job ain’t worth my life and my students’ class credits aren’t worth theirs.”