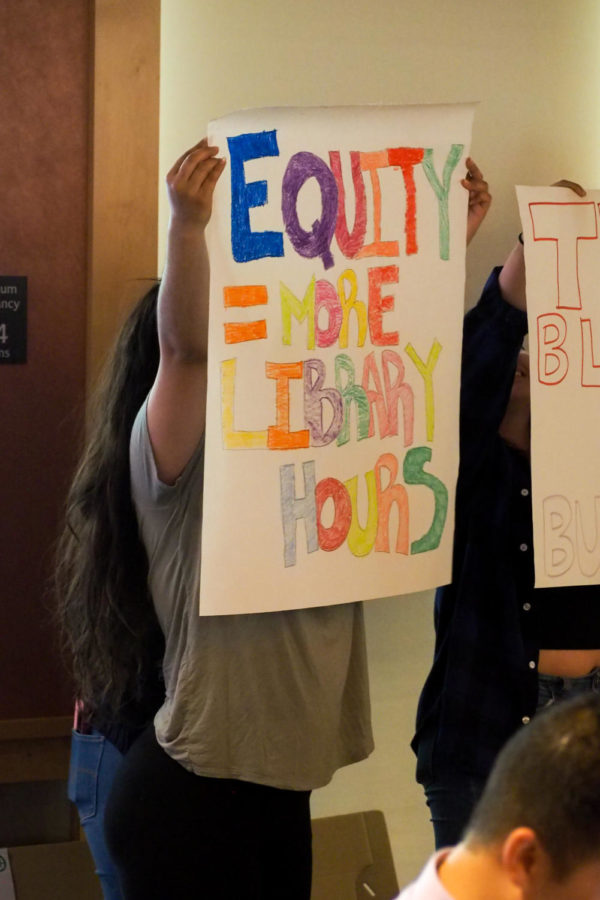 Student protest during the Board of Trustees.

Picketing Santa Rosa Junior College students concerned about cuts to library hours overshadowed a congress member’s visit and other issues at the Sept. 11 Board of Trustees meeting. Despite students’ impassioned pleas for action, the board made no decisions on the issue.

Several students stood at the back of the crowded meeting hall holding signs calling for better library hours.

Abril Barbosa Chombo, a Student Government Assembly officer and vice president of finance, was the first to speak at the podium. She urged board members that cutting library hours would harm the student body. “The library is not only a place for students to study, but to provide services that we actually do not have at home,” Chombo said.

Daniel Pablo, a first-year SRJC student, voiced his concerns about the library hours. “When the library first opened, each student had the opportunity to finish their homework seven days a week,” he said. “Now because of ‘tight budgeting,’ student are forced to scramble for a safe space to finish their task five days of the week.”

Student Body President Eduardo Osorío Juárez joined his fellow students in voicing concerns about how the school treats its students. “Treat all students like they are the student body president,” Juárez said.

Juárez shared his speaking minutes with Shawn Hartshorn, vice president of clubs for the Petaluma campus. Hartshorn wanted to acknowledge that students, through their elected officials, supported a resolution for Rank 10. “It affects students’ lives, through the faculty, every single day.”

Board of Trustees established Rank 10 more than 30 years ago as a method for determining faculty salary. It promised fair and competitive wages by matching the salary of the 10th-highest paying district in the state. Last spring, the All Faculty Association (AFA) launched a picketing campaign in protest of a proposed faculty pay cut and a proposed administration pay raise.

Karen Frindell Teuscher spoke on behalf of AFA and reported that while at an impasse, negotiations are looking better. “I can honestly say now that things are looking up,” Frindell said.

“They have a combined total of a 145 years of teaching experience, which is pretty darn impressive,” Saldaña-Talley said.

Also in attendance was Congressman Mike Thompson, who presented the board with a Congressional Recognition Statement. The signed statement was presented to President Maggie Fishman and Dr. Frank Chong and was made to honor the 100th anniversary of the college.