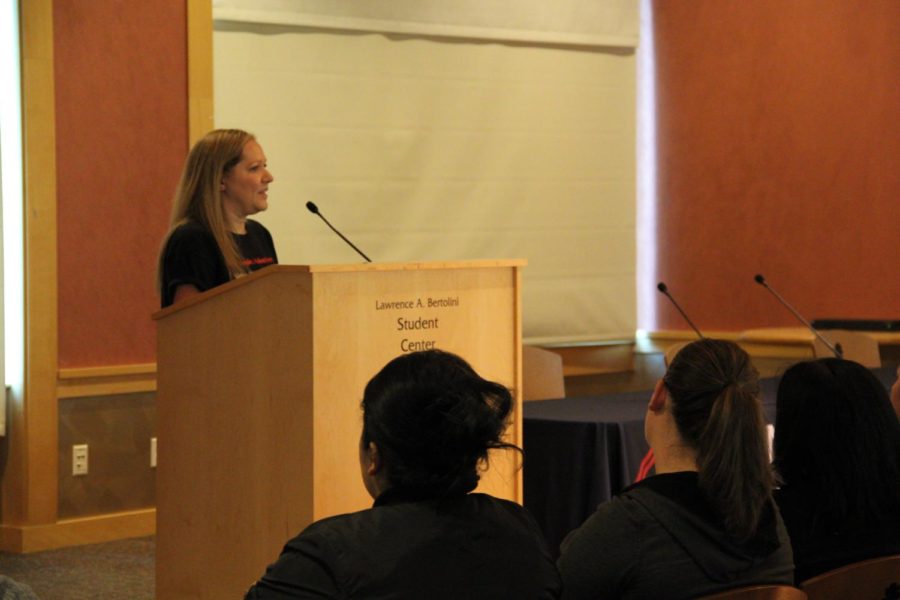 Shawn Vanleuven, who organized Human Trafficking Awareness Night in conjunction with Active Minds Club at SRJC, explains that the only way to bring awareness to sex trafficking is through discussion.

Shawn Venleuven, 35, is happy to be alive.

“If there’s anything you should take from my story, it’s that human trafficking can happen to anyone,” Venleuven said to audience members during Human Trafficking Awareness Night on May 9, an event the Santa Rosa Junior College Active Minds club hosted in Bertollini hall.

Venleuven, one of many of the night’s participants, was trafficked in high school. As a freshman, she had no idea what it was.

“For a long time, I didn’t even know what I was involved in. I thought they were just interested in me,” Veleuven said. “[But] by the time I was a senior in high school I was living a double life. It was hard.”

Venleuven was not only trafficked, she also struggled with drug addiction. After living on the compound, she fought for years to overcome her addiction.

“10 years had passed since the first time I had tried opioids. I got a staph infection in my sinus and the doctor made me sign a waiver in case I didn’t wake up, ” said Venleuven. “It could have gone one of three ways: I could instantly have died, I could have had permanent brain damage or I could be perfectly fine.”

It took years in the making, but she eventually turned to God; someone she reveres and accredits to her success today.

In addition to a guest speaker, the event featured a short documentary and a panel of representatives from local non-profits and groups combating human trafficking in Sonoma County.

The film, “The Long Night,” shared the experiences of two human trafficking victims in Seattle, Washington and provided critical information on identifying and preventing the crime.

Shortly after Venleuven, the panel members answered audience members’ questions. Representatives from Verity, the Santa Rosa Police Department and the Sonoma County Human Trafficking Task Force spoke about the conditions of Sonoma County’s sex trafficking ring and offered advice on how to prevent it from escalating.

Verity partners with legal aid services and Social Advocates for Youth (SAY) to provide stability and support for survivors.

“We go out into the streets and we make ourselves available so that [the victims] are comfortable opening up to us so we can give them justice,” Jessica Stillman said.

Stillman is a bilingual human trafficking caseworker for Verity where she provides counseling and connections to resources for survivors who have escaped their captors.

“We bring the resources to our clients to help them with the journey of their healing process,” Stillman said.

If you or someone you know is a victim of human trafficking, or you witness or encounter someone being trafficked, contact #1-888-373-7888.