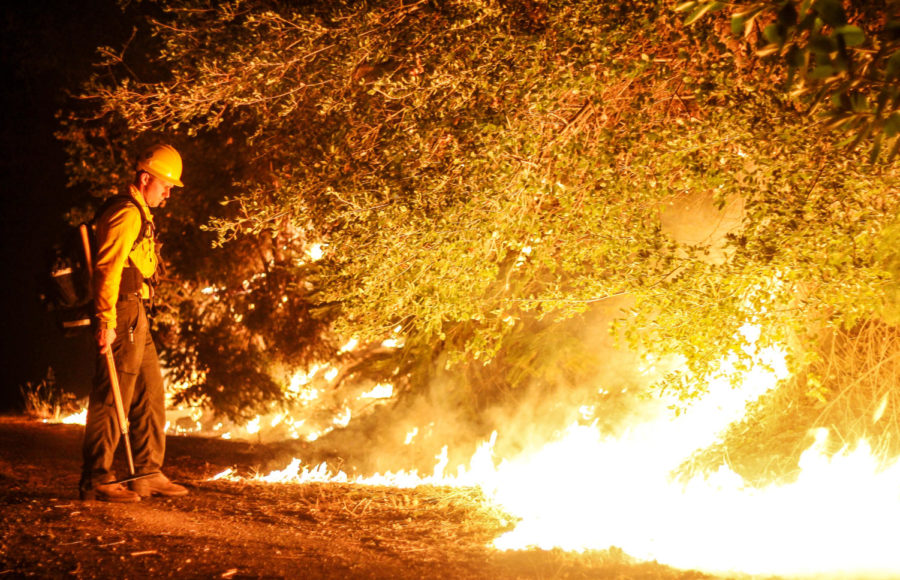 A dry winter has brought California back into the drought conditions that were cited as a major cause of last Fall's wildfires.

Critically dry weather patterns that led to severe drought and widespread wildfires have returned to California, making Santa Rosa Junior College staff and students apprehensive of the upcoming summer and the renewed risk of wildfire.

According to a Feb. 13 study by the United States Drought Monitor, more than 45 percent of California suffers from moderate to extreme drought. In November, that figure sat around 8 percent. Snowpack for the state sits at 20 percent of expected levels, according to California Cooperative Snow Surveys.

One of the biggest concerns held by SRJC students and faculty is the renewed risk of wildfires. Firefighters cited the incredibly dry climate as one of the factors that led to last October’s fires.

“Droughts will have an impact on fire danger. Mainly, the fire season can be a lot longer than normal. The droughts cause the fuel moisture to stay low for a longer time and the heavy fuels will be easier to ignite,” Avraham said.

SRJC Junior Ryan Ruegamer, 22, is apprehensive about the upcoming summer. “I thought after last winter we were out of the woods drought-wise, then the fires happened and this winter was dry, and now it seems like we’re right back where we were before,” Ruegamer said.

Environmental Science Professor Martha Murphy predicts that another drought is on the horizon. “We are currently at only about half of our average annual rainfall, and since we are rapidly moving past our rainiest months and there is no rain in the forecast, it appears that we might be looking at another drought year,” Murphy warned.

The heavy rains of last year’s winter could have lulled Californians into believing that their drought issues were behind them. Governor Jerry Brown rescinded emergency conservation targets for cities, resulting in an 18 percent drop in the amount of water saved compared to last year, according to the State Water Resources Control Board.

If current weather patterns and past events tell us anything, Californians will have to start conserving water as the days grow longer and hotter. But, according to Murphy, there are several ways SRJC students can help.

“There are many things students (and their friends and families) can do to save water, starting with taking shorter showers, which is easy and costs nothing. For those who are living at home or in a house, low-flow water fixtures can also make a big difference, and pay for themselves in the long run. Also, if you have a dishwasher, it actually saves water to wash your dishes in a dishwasher as long as it is full,” Murphy said.

Alexa Forrester, an environmental philosophy instructor at SRJC, thinks that Californians need to move to a proactive approach, focusing on drought prevention and diet.

“This includes not only how much water we directly use, but also our dietary choices as well. For instance, meat is incredibly water intensive, as are some plant products like almonds. Changing our diets is one of the most effective ways to lower our water footprints,” Forrester said.