Take Back the Night educates SRJC students on affirmative consent 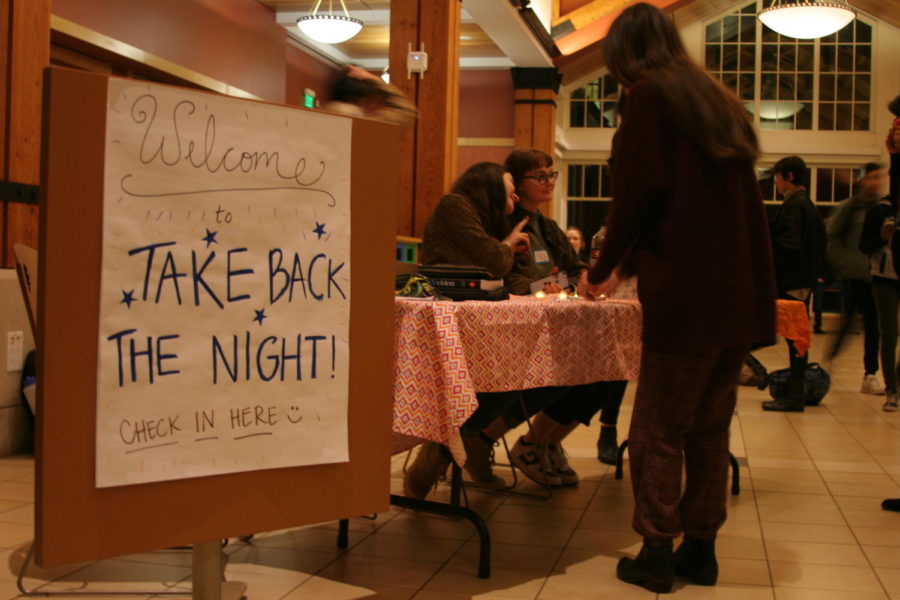 Students check in with the Feminists United booth at the Take Back the Night event.

Santa Rosa Junior College’s Feminists United club hosted Take Back the Night, an event centered around empowering survivors of sexual assault, which took place in the Bertolini Student Center on Nov. 29 and offered an inclusive environment sustained by comfort and consent.

“We bring an approach to counseling that is informed by feminist theory,” said Claire Beery, president of the board of Chrysalis Counseling Services and adjunct faculty member with SRJC’s child development program.

Art therapy tables lined with butcher paper and markers gave attendees the opportunity to draw. A quiet corner decorated with balloons and white strand lights, as well as question boxes with multiple prompts.

What would make you feel safer on campus?
What is a phrase you can use to call out/help end rape culture?
What is something you wish people understood about rape culture?

Before the meal, the club held a consent workshop in the Girvin Family Student Activities Center. A showing of the popular YouTube video, “Tea Consent,” played to explain the meaning of proper sexual consent in a lighthearted yet blatant way. The video offers numerous examples of what is appropriate and inappropriate when making tea, drawing parallels with consensual sex.

Members led a consent simulation activity, which metaphorically demonstrated the importance of communication by having one volunteer direct another making a sandwich. The director could at first only use bodily or verbal cues, and then both, showing that all forms of communication are necessary for determining consent.

“It’s important for representation and to talk about what’s going on around our campus and in our society,” said Raechel Garner, 19, psychology major and treasurer of the club.

Consent was the topic of the night, with members discussing what consent entails through creative and interactive ways.

“Consent is always important even when it’s not taught enough,” Garner said. “You should be aware of your actions.”

Every month, Feminists United members explore topics such as gender, sexuality, race, ethnicity and environmental justice. Each topic is discussed in detail during weekly meetings to raise awareness of the particular social qualms.

“It’s such an amazing club and all the people in it are so kind-hearted and loving,” said Tatiana Mercier, 20, a sociology and art history major who is the club’s social media coordinator.

Mercier joined after participating in an open mic activity at the first Take Back the Night event in 2015.

“Ever since that first semester, I’ve made space for this club. I schedule my classes and work around it,” Mercier said.

Other members joined because the club offers a safe space to meet like-minded people.

“I joined Feminists United to meet more people who felt comfortable identifying as feminists and to have a sense of community,” said Nova Medina, 20, a women and gender studies major and activities director of Feminists United.

Feminists United’s main objectives are to be inclusive and diverse while educating the community, empowering others and creating safe spaces for people who want to learn about feminism.

“I think great leaders empower other people to lead and that’s my main goal,” said Hannah Cagle, 21, president and founder of Feminists United SRJC. Cagle, a political science and social justice studies major, formed the club in the fall of 2015 after discovering SRJC didn’t have any active feminist clubs. Later in the semester, the club hosted its first Take Back the Night event.

With about 15 regular members and 30 frequent attendees, the club is based on intersectionality and has plans to collaborate with other campus clubs, like the Black Student Union and EcoLeaders.

Feminists United meets 5:30-7 p.m. on Tuesdays in the Center for Student Leadership room located in the Bertolini building.