Board votes to increase management salaries 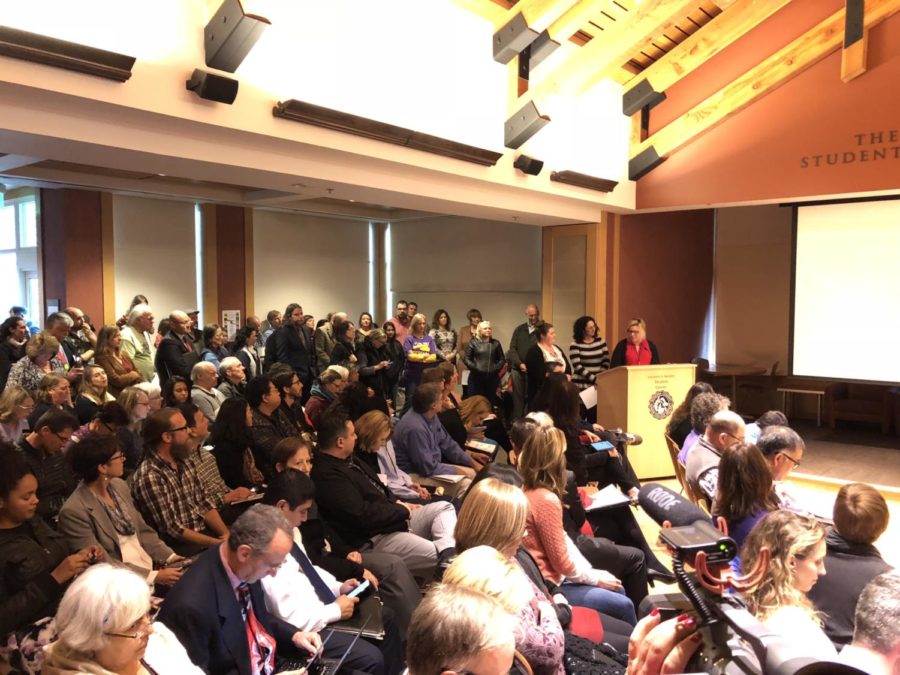 Speakers address a packed room during the public comment period at the Dec. 12 Board of Trustees meeting. Photo by Rachel Edelstein.

An earlier version of this article incorrectly said that the Board of Trustees voted to increase their own salaries. The members of the Board are not compensated for their work and actually voted on the salaries of college administrators.

After negotiating over salary for the past six months, the AFA and the The Sonoma County Junior College District (SCJCD) have reached an impasse. Early in December, the district filed a request for impasse with the California Public Employees Relations Board, in spite of the AFA’s belief that negotiations were evolving. According to AFA, mediation will begin on or after Jan. 31.

In the standing room only meeting, the contentious item on the agenda was Item D-4, “Management Team Economic Compensation Package 2017/2018.”

Only 20 minutes were set aside for public comments related to labor negotiations, but because of the usual three-minute limit, some wishing to speak didn’t get the chance. Those who did speak had lots to say. The AFA staff members expressed their displeasure at the management giving themselves a raise, while at the same time not agreeing to increase faculty salaries.

AFA President Karen Frindell-Teuscher opened the public comment period expressing the views of the AFA that the district should reinstate the Rank-10 salary methodology. Under Rank-10, faculty salaries are determined by the tenth highest-paying California community college.

“The district maintains it cannot maintain Rank-10 due to declining enrollments and other budget constraints – when in fact the share of the district’s expenditure on faculty has been decreasing in spite of the Rank-10 formula being in effect,” Frindell-Teuscher said.

Jeff Diamond, SRJC computer studies instructor, said, “The distrust that is being created with tactics seen as dishonest is eroding the quality of our relationships. The consequences of not taking steps to heal these wounds will be destructive to the health of our institution over the long term.”

Diamond finished his comments with a request that the district “agree to a contract that shows the value you place on educators.”

Audience members gave an overwhelming round of applause to Mike Traina, film and media studies instructor, when he said, “I urge the board to make 2018 a year of celebration, not of acrimony and distrust. I also urge you to table any further increases to the management salary schedule until the faculty salary disputes are resolved.”

After the close of the public comment period and during the board members’ reports, Dr. Chong spoke about the trying times.

“Contrary to what some have said, I don’t believe going into an impasse is necessarily a bad thing. Sometimes when it’s difficult to agree and tensions rise, it’s time to bring in a facilitator.”

“We are SRJC and we will get through this as long as we do it together,” he concluded.

But when the agenda’s action item, D-4, came up, the board voted in favor of approving administrative raises without any comment.