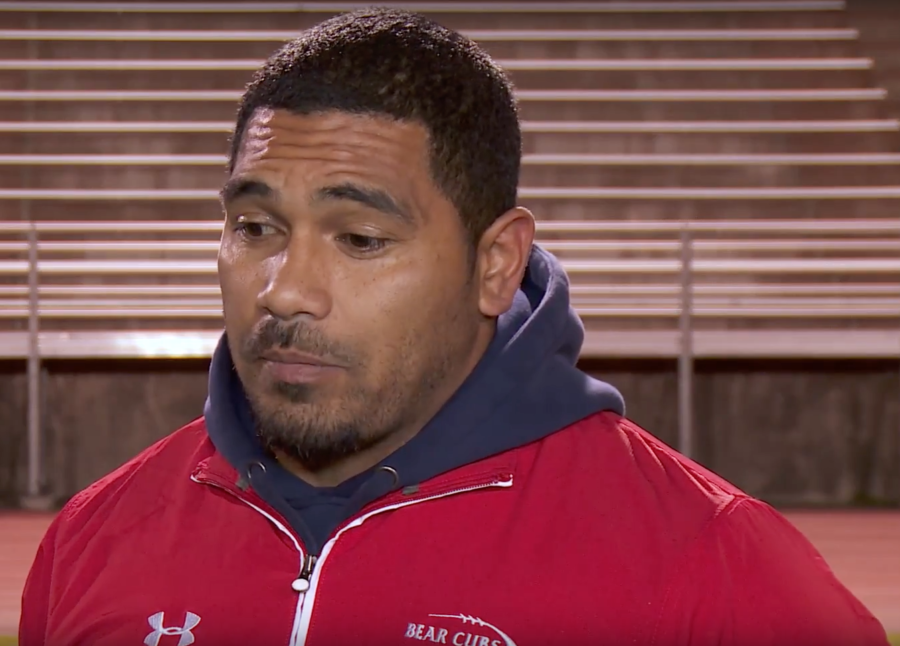 Santa Rosa Junior College assistant football coach and outreach coordinator Logologoa “Logo” Tevaseu is suspected of murder in the DUI death of SSU junior Paulette Quiba, who was killed on her way home from a family celebration.

Santa Rosa Junior College and Sonoma State University communities reacted with disbelief to the news that an SRJC football coach killed a 21-year-old SSU student in a drunk-driving incident Nov. 6.

California Highway Patrol booked Logologoa “Logo” Tevaseu, 35, into the Sonoma County Jail Nov. 6 on two charges of drunk driving and suspicion of murder after he crossed into oncoming traffic and drove head on into SSU junior Paulette Quiba’s sedan on Lakeville Highway. She died on the scene.

At his second arraignment on Nov. 14 Tevaseu’s lawyer, Jai M. Gohel, delayed the plea for two more weeks. Judge Robert LaForge granted the request. The beleaguered football coach will appear in court again on Nov. 28 to enter a plea.

According to the CHP, Tevaseu was driving drunk southbound on Lakeville Highway and was allegedly passing other southbound vehicles when his 2006 Dodge Ram pickup collided with Paulette Quiba’s northbound 2015 Toyota Corolla.

When the truck collided with Quiba, it caused three other vehicles to crash and sandwiched her between two of them with her still inside.

Officers, paramedics and firefighters arrived on the scene, and CHP closed Lakeville Highway at Highway 37 and Old Lakeville Road. Paramedics transported three people to Memorial Hospital to be treated for moderate injuries.

Tevaseu was denied bail and remains in custody. He appeared in court Wednesday before Judge Robert La-Forge and postponed entering a plea. His next court date is Nov. 14.

Tevaseu’s drunk driving conviction in 2012 in Sonoma County led to the murder charge rather than the lesser charge—manslaughter.

“We believe in redemption at this college. There are so many people who have had a tough time and at some point or another made a mistake,” Maremont Silver said of the 2012 arrest. “If we didn’t hire anybody like that, we would really not be living up to our values of compassion and believing that people can learn and that they can turn their lives around.”

Santa Rosa Junior College is conducting an internal investigation of this incident and has advised all faculty, including the football team, not to speak to the press at this time.

“This was a tragic accident, and our hearts go out to the families affected by it,” said Dr. Frank Chong, super-intendent and president of SRJC. “SRJC is treating this as a confidential personnel matter.”

Quiba, a business major in her junior year, moved with her family 10 years ago from the Philippines to Oakley, Calif., where she attended Freedom High School. She moved away from home to attend Sonoma State Uni-versity in 2015.

“She was a very nice and caring person,” said Megan Backs, an SSU student and Quiba’s roommate in 2016. “Very hardworking, motivated and a wonderful student. She was also super friendly.”

Her sister, Phoebe Quiba, wants anyone with a sibling to make the most of their time together.

“You guys have the same heart. You came from the same womb; you were made by the same people,” Phoebe Quiba said.

Quiba was a member of the Accounting Forum, the Filipino American Association and Join Us Making Progress, her sister said.

“She was good to everyone, and you see that with the people she surrounds herself with,” Phoebe Quiba said. “She was like a magnet. People really identify with her and she’s easy going.”

She was a member of Phi Sigma Sigma at SSU and her goal was to be an accountant after college. Last summer, she worked as an intern with PwC Audit Services in San Francisco and the company offered her a job, Phoebe Quiba said.

An outpouring of affection has flooded Quiba’s Facebook page, including many SSU students.

“She seemed like a great person who was always smiling,” said Grace Ingrebretson, Sonoma State first-year student. “Every time I talked to her she was super sweet and friendly. She had a contagious smile.”

Her sister is trying to remember all the good times they shared like growing up singing and dancing in their living room and Paulette’s love of Christmas.

“It could be the day after New Years day and she’ll start counting down until Christmas and then start watching the Hallmark channel,” Phoebe Quiba said. “Everything positive you could associate with her I do, and that’s why when I see something happy nowadays like people laughing, dancing, singing—I think about her.”

There is no known report of Tevaseu having a drinking problem and many who worked with him on a regular basis have expressed shock at his involvement in this incident.

“When I met Logo, he seemed very responsible and he loved what he was doing,” said Tom Rivas, recruitment videographer for SRJC football. “I wouldn’t have even thought that he did drink because he was so professional on and off the field.”

The college hired Tevaseu as an assistant football coach and to work full time in the financial aid office in 2015. He was recently given the position of outreach coordinator for the college where he brings SRJC athletes to high schools, continuation schools and elementary schools to try to boost SRJC enrollment. His annual salary is $51, 936 plus a small stipend for coaching, according to Maremont Silver.

“He was always positive and brought an energy that could only be matched by his partner in crime, Coach Martin,” said former SRJC running back Ja’narrick James. “I was heartbroken to see what had happened because he was always really hard on us about our decisions in life and in particular the way we carry ourselves as young men.”

Wagner met Tevaseu in 1999 at the group home where Tevaseu was living in Boonville.

“The two years I was head coach at Mendocino College, we would go over to the group home two or three times a year,” Wagner said. “We got to know all kids there really well, and over the years we’ve had a handful of kids from that same group home come play for us.”

Wagner left Mendocino for SRJC the next year and recruited Tevaseu to come play for him.

“It would be like if you took one of our really good players and put him in a 10-year-old’s Pop Warner game,” Wagner said. “That’s what his game looked like in high school.”

Tevaseu played football for two seasons for the Bear Cubs. He was an All-Conference linebacker and then trans-ferred to Texas Christian University in 2003.

“For him to be back coaching with me, it was like the ultimate compliment and ultimate pleasure. It was like one of your boys coming home,” Wagner said.

Besides coaching and his work in outreach and financial aid, Tevaseu was also elected as the classified staff vice president, where he was involved in the presidential fit campaign—a program to train faculty members and get them in shape. He also coached other youth sports, including his 11-year-old daughter’s soccer team.

Wagner said Tevaseu was like a son to him but he needs to be held accountable for his actions.

“It’s hard man, because he did something really bad,” Wagner said. “There’s a fine line between saying this guy is a really good person but also then offending the victim’s family and not being sympathetic for them. Of course I wanted to advocate for him, but at no point do I ever want to seem that any of us are insensitive to what’s happening with the family that was affected.”

Phoebe Quiba is not thinking about what punishment Tevaseu deserves but at the moment is staying neutral.

“I don’t have anger in my heart. I don’t have hate in my heart for this guy,” Phoebe Quiba said. “To me he didn’t even exist up until the moment that he took my sister’s life. I don’t have to wish badly upon him. It doesn’t change anything so whatever he gets is what he he deserves.”

She is using the lesson her sister taught her and emulating the way Paulette lived her life.

“My sister is the most forgiving, most loving person that I know and this is her influence on me,” Phoebe Quiba said. “I don’t want to say he deserves to spend the rest of his time in prison, but I just hope he learned from this.”

Phoebe Quiba is also urging everyone to not take your loved ones for granted.

“Losing a sibling is a feeling that compares to absolutely nothing,” she said. “I just want people to really make the most out of their time they have with family because you never know.”