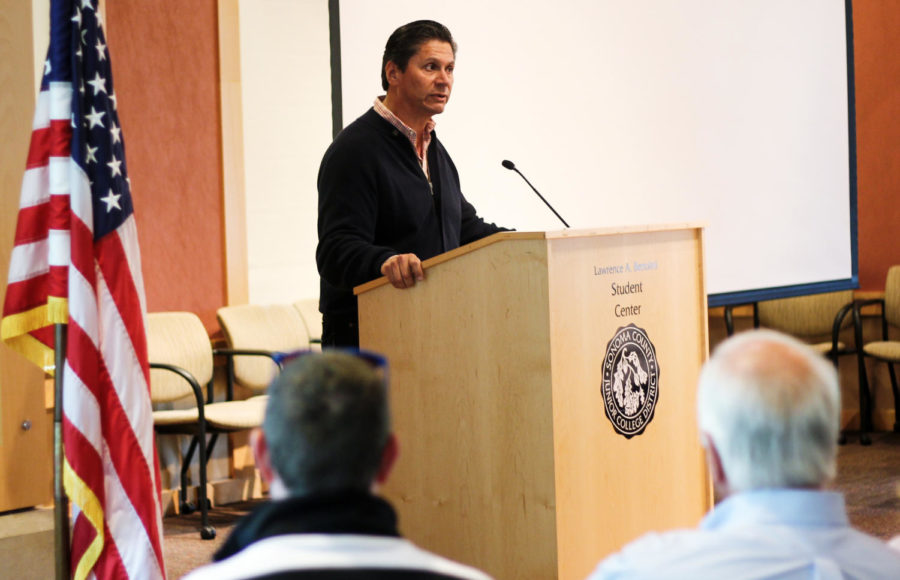 The Santa Rosa Junior College community gathered together at the Lawrence A. Bertolini Student Center on the Santa Rosa campus on Oct. 19 and took a collective breath— literally.

After the worst wildfires in California’s history forced a two week closure of the campus and canceled all school related activities, the college is finally ready to welcome back its students, staff and faculty members to resume the fall semester.

SRJC President Dr. Frank Chong said the night was going to be about three things: The impact of the fire, the response and the recovery.

The wildfires’ destruction is unprecedented for the state; SRJC in particular felt the effects of the devastation: at least 534 students, staff and faculty members lost their homes and 35 percent of the school’s population reported that they were forced to evacuate.

In response to the natural disaster, SRJC raised $150,000 ($50,000 of which the Exchange Bank donated) for SRJC wildfire victims. As the community grapples with an abundance of uncertainty in the wake of the fires, the biggest question facing the school is the retention of students, staff and faculty members moving forward.

Sonoma County faces a long road of rebuilding in the years to come. SRJC, which has always played an instrumental role in the community, hopes to continue this during the recovery efforts.

“SRJC is training the people who will help rebuild homes, rebuild the community and rebuild our lives,” Chong said.

The Fire Relief event featured an impressive list of guest speakers, headlined by Eloy Ortiz Oakley, the chancellor for California Community Colleges. Ortiz understood the importance of attending in person.

“Dr. Chong called me and I could hear it in his voice. I knew something was not just wrong, it was really wrong,” Ortiz said. “The junior college has gone through a great depression, a world war and countless challenges throughout its history. This is one more that will define the character of Santa Rosa Junior College.”

Not unlike the community, the school faces monumental challenges ahead in the aftermath of the natural disaster. Ortiz promised the school will not be alone when facing the uphill battle to come. “We will bend every regulation, we will pound on every door in the capital to do everything possible for the family of SRJC to recover.”

Ortiz was followed by Congressman Mike Thompson, who praised the school as “a top-rate community college” and praised Chong as “a great guy.” Thompson stressed that the college would be here for students, staff and faculty in need during these trying times.

“I have never in my life seen the federal and state agencies working as smoothly as they are now,” Thompson said. “It’s unprecedented. We’ve had approval of every federal request made within days. This is the worst wildfire in California’s history, and we all lived through it.”

The massive loss of housing caused by the devastating wildfires has raised the level of concern for the community in terms of the amount of affordable housing that will exist in Sonoma County. Zane’s motto in response to this is: “If there’s something that can kill NIMBY-ism, it’s this. Build, baby. Build.”

The disaster brought mass destruction, but it also brought mass unity, something that Associated Students Government president Evelyn Navarro admits may not have always been there. “We might not have been as unified as we should have been at the beginning of this.”

As a student, Navarro voiced a fear echoed by the majority of the student population. “I was afraid to come back and see the college I love so much just be a ghost town.”

The list of speakers ended with a prayer from SRJC psychology instructor Brenda Flyswithhawks, a member of the Eastern Band of the Tsalagi, Cherokee Nation. As the rain outside began to pick up in force, as if Mother Nature herself decided to finally chip in on the healing process, Flyswithhawks said, “This is the beginning of the opening as far as I’m concerned.”

Robert Ethington, dean of Student Affairs and Engagement Programs, helped to run the event. “Dr. Chong wanted to put on a community gathering before school started as a way of welcoming everyone back,” he said. “We hope to make those who lost their homes feel like the JC is their home.”

The Fire Relief event felt like a homecoming for the close to 400 who attended. SRJC polling students, staff and faculty members conducted an email survey on students’ readiness to return to school, which revealed more than 75 percent felt ready to resume classes when the campus re-opens on Oct. 23.

On a night when the SRJC community displayed its willingness to extinguish the flames of the most devastating wildfires in California history, it proved there will always be one flame that will never go out, the burning desire for the pursuit of higher education.