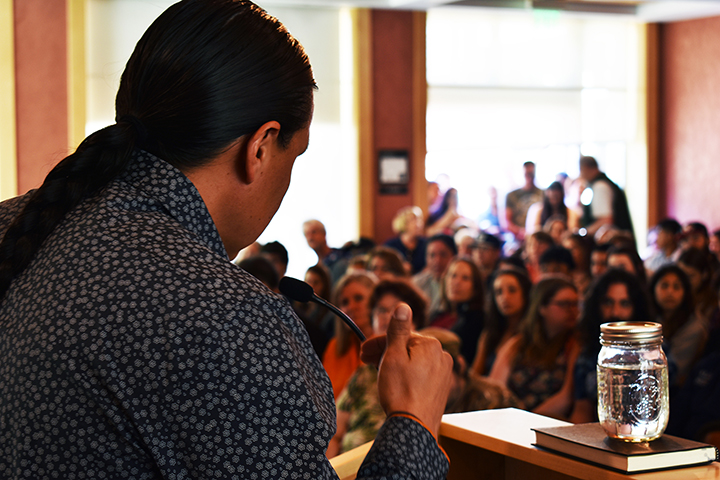 Sioux Tribal member and Standing Rock activist Chase Iron Eyes speaks to a packed crowd in the Lawrence A. Bertolini Center at Santa Rosa Junior College April 3. The event gave students insight into one of the most controversial protests in the U.S.

The pipeline protesters and water protectors of Standing Rock, North Dakota, continue the fight for clean water and an end to the construction of oil pipelines in Native American tribal territory six weeks after the camps were raided and evicted. The effort, which began almost one year ago, reached Santa Rosa Junior College April 3 as an event by Standing Rock Sioux tribal member and activist Chase Iron Eyes drew a crowd to fill Bertolini Center.

Dr. Brenda Flyswithhawks, behavioral sciences department instructor, was responsible for bringing Iron Eyes to SRJC. Flyswithhawks said she wanted students, faculty and staff to hear the truth about the water stronghold at Standing Rock and the movement that continues today.

Iron Eyes played a key role on the front lines of the demonstration, providing legal services and hosting tribal leadership. He gave a first-hand view of the complicated dynamic that led to the raids and subsequent dissolution of the protest.

“What people faced out there was extremely serious; people faced deadly force. People faced corporate sponsored state executed violence and brutality,” Iron Eyes said. He detailed how North Dakota law enforcement officers and national guardsmen at Standing Rock encroached on the Fourth Amendment rights of the protesters and how he believed they used psychological warfare to deter the movement.

According to the Associated Press, over the course of the protests the state of North Dakota spent $38 million on policing costs. Many peaceful demonstrations in the area turned violent despite the efforts of the Standing Rock Sioux members and their allies. However, Iron Eyes explained that the violence was perpetrated by the police rather than the protestors, who are often branded as ‘rioters.’

Iron Eyes detailed these violent acts committed by the pipeline enforcers, ranging from the use of K-9 units that reportedly injured several protesters, bean bag rounds and pepper spray, nausea-inducing high-pitched sirens to disperse the crowds, and useage of water cannons during below freezing temperatures which caused concern for widespread hypothermia among the protestors. These injustices were reported by several media outlets, such as the New York Times.

Iron Eyes described how after witnessing the inhumane treatment of the pipeline protesters, more than 4,000 U.S. military officers and veterans arrived at Standing Rock to bring aid and support. Iron Eyes believed the veterans’ involvement was perhaps the most significant turning point of the movement for the way it called into question the loyalties of the officers protecting the pipeline’s construction.

With media coverage of the protests and added pressure from veterans, former President Barack Obama’s administration announced Dec. 4 that the U.S. Army Corps of Engineers would not grant the final easement to continue construction on the pipeline. President Donald Trump reversed Obama’s ruling with an executive order Jan. 24 to advance the approval of the Dakota Access and Keystone XL pipelines and authorize raids to clear the camps.

“In effect they said, ‘Indian, you can protest this pipeline, that we’re going to force into your lands by gunpoint. You can protest that pipeline. We support your right to protest that pipeline as loudly as you want, because we value your right to voice your opinion,” Iron Eyes said. “‘You can beat your tong-tong and sing your chants as loud as you want. We respect that. But were still going to build this pipeline.’ That’s what happened.”

As a result of the Standing Rock camp clearing raids, Iron Eyes now belongs to a list of more than 800 protesters who face criminal charges, including various counts of ‘inciting a riot.’ However, the fight is far from over. Iron Eyes noted that with the executive order of the president, the construction of the Keystone XL pipeline will begin in about a year. Cheyenne tribal territory will be encroached upon much like the Sioux Tribe’s land has been.

Financing has not been lined up for the Keystone project as of yet, and Iron Eyes expressed his belief that by being active at the local level, places like the SRJC and the city of Santa Rosa are prime grounds for divestment actions.

SRJC student Itzel Macedonio, was one of many people captivated by Iron Eyes’ call to action.

“Chase Iron Eyes’ presentation made me feel disappointed about how ‘far’ we have advanced in today’s society. That is, it’s disappointing that we have to fight for clean water, which is a basic human need and that Native Americans are continuing to struggle for their human rights,” Macedonio said. “He showed me how much work we have ahead of us.”

Iron Eyes believes that despite the result, Standing Rock was a symbol for the American people. Along with millions of others, he believes this movement has only just begun.

“We cannot let this fire go out. We’ve got to stay strong. We need to put out our media, craft our legal strategies, advocate for divestment and present a strong unified progressive front,” Iron Eyes said.