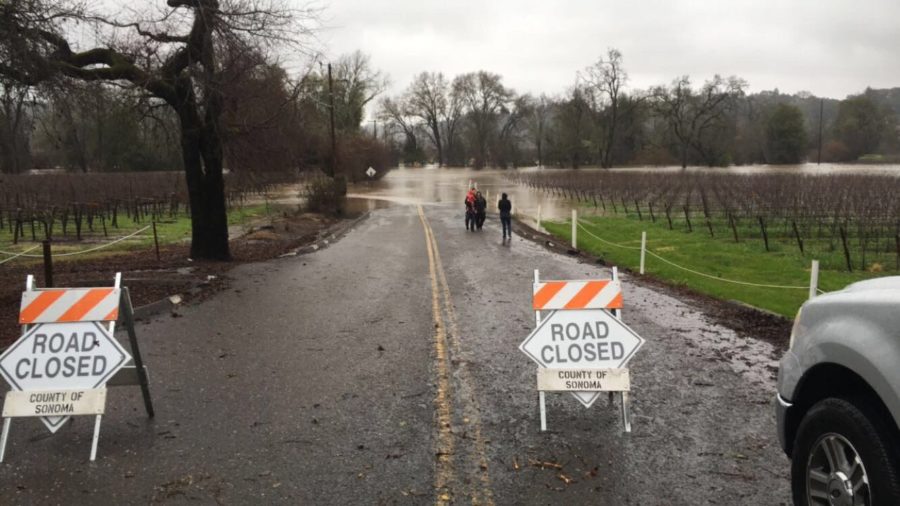 A common sight this winter: roads throughout Sonoma County closed down for maintenance due to flooding.

Despite the floods, the storms are a blessing to the area. Only three weeks ago, Sonoma County, along with the rest of Northern California, was declared drought-free by the United States Drought Monitor. During October of last year, this drought, which was declared a state emergency in 2014 by Gov. Jerry Brown, covered 80 percent of the state with an extensive amount of the area considered to be at the level of “exceptional drought.”

Although there is no clear ending in sight for this drought, there are signs that the worst may have passed. The Sierra Nevada snowpack, a common measurement of water source in the state, is at its highest point of the past two decades reaching 177 percent of the yearly average level.

“Our reservoirs in Sonoma and Mendocino counties are well over 100 percent full at the moment,” said Arthur Hayssen, meteorology instructor at SRJC. “Forty-nine percent of the state is considered free of the drought, as of Feb. 2,” Hayssen added.

According to the Washington Post, “considerable portions of California have already received at least half of their annual precipitation just one month into the year.” While this is excellent for water conservation efforts and agriculture, storms of this magnitude can be dangerous for drivers and residents due to vast floods and sweeping mudslides which have been prevalent since the beginning of the new year.

As a result of this unusually heavy storm, SRJC viticulture classes normally held at Shone Farm, were temporarily held in the classrooms on SRJC’s main campus.

“It was unfortunate that there was so much rain that it flooded and we didn’t have access, but that was a temporary thing. As far as Shone Farms is concerned, the rains are a really good thing because it is filling up the soil profile,” said Merilark Padgett-Johnson, chair of the SRJC viticulture program.

She explains that after years of constant drought, the wells have dried up and the program must use recycled water from Windsor for irrigation as a result.

“It’s always better to capitalize on what Mother Nature gives you, instead of bringing it from another source,” said Padgett-Johnson.

Storms such as these recent ones are of great benefit to the vineyards and farms in Sonoma County. This one in particular was beneficial to SRJC in that it replaced Shone Farm’s reliance on outside sources of irrigation for the time being, providing the program with a natural alternative that reduces its water upkeep costs.

Shone Farm is not the only place where SRJC is improving its water use and sustainability. In an effort to improve sustainability, SRJC has used Measure H funds, passed by Sonoma County voters in 2014, to reduce and reverse the adverse effects the drought has inflicted on the campus over the past few years.

A new “smart watering” system called Maxicom collects data from stations at both the Santa Rosa and Petaluma campuses which creates an appropriate irrigation schedule that reduces SRJC water usage by 20 to 40 percent. The college is also introducing new native and drought tolerant plants, further decreasing the schools water intake while also improving the natural aesthetic appeal of the school.

Even with the aid of this season’s storms, experts believe California is likely to remain in the drought for the foreseeable future. So while the green grass and newly running rivers seem to indicate an end to our waterless woes, individual and large scale conservation efforts should remain in place if the state is to continue managing this crisis effectively.