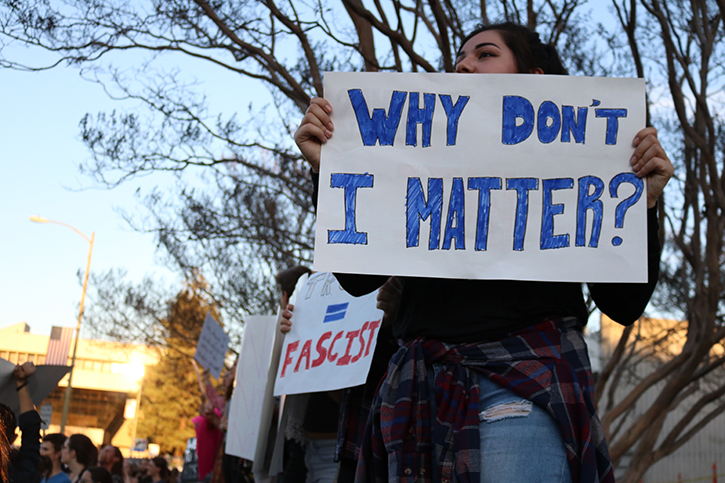 At two separate rallies on Nov. 10 and 11, Santa Rosa Junior College students and community members protested what they see as the bigotry of President-elect Donald Trump.

Both events were pacifist in tone and marked by support from passers-by and motorists. Protesters chanted “Trump must go” and “Not my president.” The 250 people at the Nov. 10 march took over two lanes of traffic and marched from SRJC to City Hall. The following evening, thirty marchers followed a similar route but stayed on the sidewalk for safety purpose.

“This is an anti-bigotry protest,” said SRJC student Mia Al Mutawa, who uses the gender pronoun they and was an organizer of the Nov. 10 rally. “This is against xenophobia, transphobia, any queer phobia, Islamophobia.” They and other protest organizers urged attendees to prioritize the voices of people of color.

The election of Trump shocked protesters because of his disparaging comments about women, minorities, immigrants and the disabled.  Many in the LGBTQ community are concerned that gains made under the Obama administration will be reversed during Trump’s administration.

SRJC student Jean LaRoy A. Jackson, an outspoken participant at both marches, said he was there because he was fired up. “This man is about to draw back 50 years of progress we made. I’m scared for my Latino friends, my black friends, my transgender friends, friends that have no genders. I’m going to take that fear and put into everything here, cause my heritage is not a crime.”

“I think Donald Trump stands for hate and bigotry,” said protester Erin Opperman on Nov 10.  “I would like to make it clear that I’m opposed to [bigotry] being in power. If I can tell subjugated groups and minorities that I’m their advocate and I’m here for them and I don’t agree with this, then I want that message to be carried.”

At the Nov. 11 march, protesters experienced some hostility as a passer-by called out racial slurs and said the Obama administration didn’t support white people. Two protesters helped keep the peace.

Al Mutawa hopes these kinds of protests, and others like them, can have an impact on the national narrative.

“This is our voice and regardless of whether the election is over or not we still have a say, and our feelings are valid,” said Al Mutawa. “The marginalized are still valid.”