SRJC students take back the night 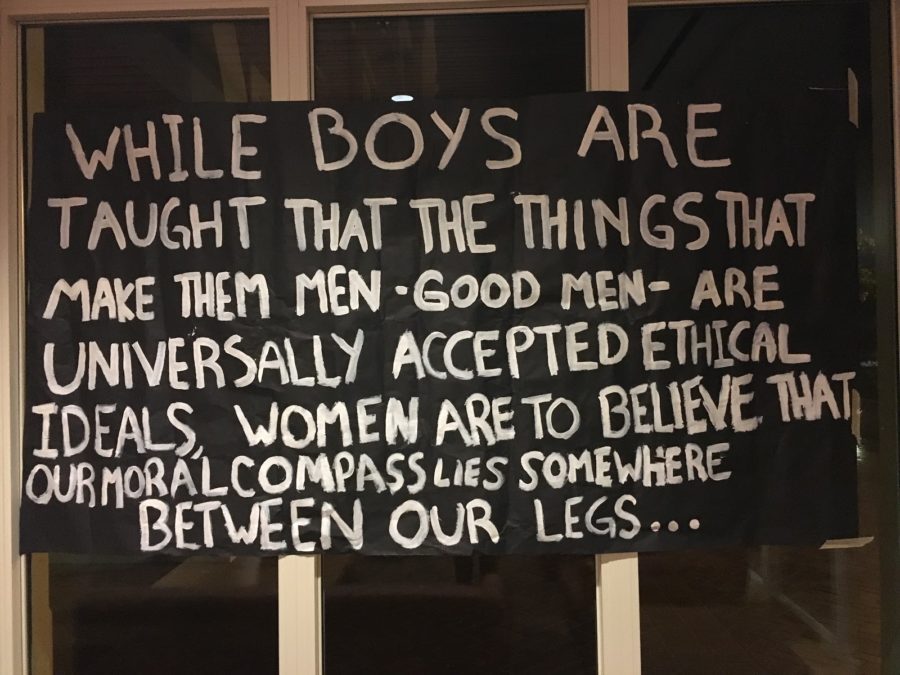 The Feminists United Club created a poster on negative social perceptions of gender for their Take Back the Night event on Oct. 25.

Santa Rosa Junior College’s annual Take Back the Night, a night dedicated to raising awareness about rape culture and sexual violence, was held in the Bertolini Student Center on Oct. 25. This night showed not only women, but all genders and races the importance of being aware of these issues.

The college’s Feminists United Club held a presentation on sexual assault prevention and an open mic. The club made this night to be an outlet for anyone who has experienced sexual assault or who would like to be educated on the issue.
Hannah Cagle,  Feminists United president, gave an insight of what the night was supposed to entail. “We wanted to cover the whole conversation of sexual assault,” she said. Not just women, but also men were there to break the stereotype and share their stories.
Cagle said, “This is a message for a cultural change, learning how to practice consent and about bystander intervention.” Attendees were taught what to do if they see someone being assaulted or harmed. The club presented a YouTube video “Bystander – Intervention Practice – Wall.”
According to Rainn.org, 54 percent of sexual assault victims are 18-24 years of age, more than half of that age group. Members of Verity, a Sonoma County 24/7 sexual assault crisis hotline, attended the night. The group had a table set up and informed students on how they can help anyone dealing with these issues.
Many emotions filled the Student Center as each person went up on stage. Emily Zarate Rodriguez talked about the story she shared. “I’m a very open person and I’m able to control my emotions, but what happened up there, I wanted to cry because it was something I didn’t really talk about,” she said.
Rodriguez is a part of the Feminists United Club, which has helped her feel like she isn’t alone. She is very passionate about the club’s message. “Whether you’re a guy, girl, transgender, etc., everyone should have the same rights regardless,” she said.
The club teaches the importance of intersectional feminism in the community. To be an intersectional feminist is to be mindful of all unjust associations, like sexism, racism, homophobia and transphobia, and to be connected with all people and treat them equally.
“When I first joined, I got asked, ‘What are your pronouns?’ which I never thought about,” Rodriguez said. “I identify as ‘she’ and ‘her’ but there are people that go by ‘they’ or ‘them,’ which opens up the topic about gender identity.”
Gender identity is discussed in the club. This issue  the club discusses is not just black and white, as sexual abuse affects all of society.
Take Back the Night was a movement to show peace and love towards every community. As each person told their story, the more people realized that it is a real issue. The members of the Feminists United Club will continue trying to get the message of sexual assault and abuse out there, not just to SRJC but the community.
Call the Verity 24/7 Hotline for support at (707) 545-7273.
Delete Image
Align Left
Align Center
Align Right
Align Left
Align Center
Delete Heading