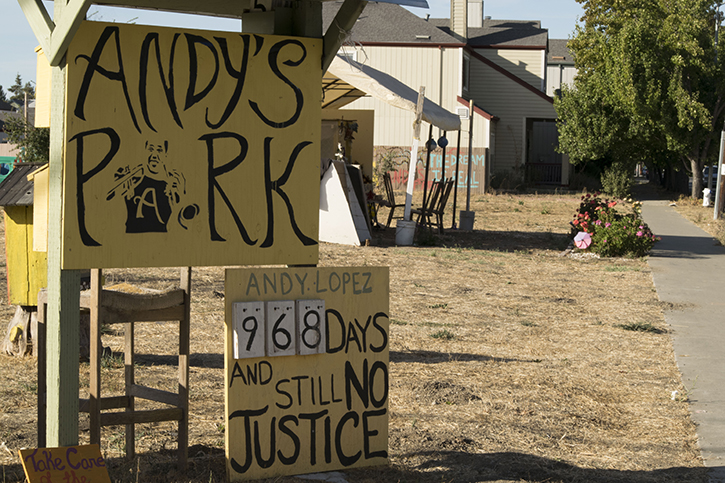 The site of Andy Lopez’s death in 2013 will become a new park with a $1.2 million grant from the Sonoma County Board of Supervisors. The park will feature a community garden, a skate park, dog park and a basketball court.

After 13-year-old Santa Rosa middle-schooler Andy Lopez was shot by a police officer in October 2013, a new generation of the city’s Latinos are responding to the decades-long issue of civil rights for minorities in the U.S.

“Andy Lopez’s death was definitely the tipping point,” said Hernan Rai Zaragoza Lemus, vice president of advocacy at Santa Rosa Junior College. “It’s unfortunate we had to lose a life for people to realize they need to get involved in their community—but there is a flower blossoming from this.”

A generation of young Latino students are advocating for equity and a louder voice in their community. Supporters like Lemus have spurred change in the community by seeking out new leadership roles.

“When the youth became engaged and questioned authority, it was a wake-up call to me,” Lemus said. “I’m only a year older than some of these kids, and what am I doing to help? Seeing them organize protests and seeing them stand up made me feel like I needed to stand up, too.”

Santa Rosa’s Latino youth have become more engaged in the issues their community faces after the trauma of Lopez’s death. They have come to realize the slow nature of the democratic process is won through persistence and presence.

“To this day there’s still a big push [for justice],” Lemus said. “There’s a group of Latino students from middle schools and high schools that still talk about Andy Lopez’s death. They don’t see it as brown versus white; they see from a standpoint of ‘How are we going to find a solution?’”

Latino student governments across the district at middle school and high school levels are taking the initiative to build relations with local police.

“There’s dialogue between the sheriff’s department and members of the Latino student congress, which definitely didn’t exist three years ago,” Lemus said. “But they are slowly building a better relationship.”

Mistrust, however, still exists between the Latino community and local police. Though the officers involved in the shooting were investigated, the district attorney declined to file a criminal case against them and many locals believe relations won’t improve unless the officers are removed from the force. Lopez’s family is currently suing the officer involved for civil damages in federal court.

“We won’t be able to move forward until individuals such as Erick Gelhaus are held accountable for their actions, because they represent that rift,” said Hector Jimenez Carrano, a member of Movimiento Estudiantil Chicanx de Aztlan (MEChA). “There is a lot of work to be done, not just within the Latino community or the police, but as a society as a whole.”

For many in the Latino community a fear exists that their child could be next, according to Carrano.

“Every time I go to the park or I see a film of Andy, it’s like it’s right there all over again, even three years later,” said Caroline Banuelos, president of the Latino Democratic club. “I’m not related to the family but he could be my son, he could be my brother. It’s just too close to home. I don’t think we will ever forget, and it’s always in the front of our minds. When I talk to young mothers, they are so afraid for their sons and that’s not going to go away.”

Lopez’s death was a catalyst for the Latino community to fight for equality in the unincorporated areas of southwest Santa Rosa.

“Part of it was Andy because we did all of our research,” Banuelos said. “How much is not happening, like the streets not getting fixed, which they still don’t get fixed, or the annexation of Roseland. All of these things were pretty much dead until people voiced that this needs to happen and those services need to be provided.”

The Sonoma County Board of Supervisors approved $1.2 million for Andy’s Unity Park March 15, 2015.

“These children don’t have a place to go or a place to play,” Carranos said. “So getting them off the streets is really important. The park gives them a place to act like kids rather than being portrayed as what society is portraying them as.”

Having the representation of city leaders is key for the Santa Rosa Latino community to implement changes. This November’s election will determine the changes community members will see.

“It’s so vital that Latinos who are eligible to vote get registered and vote,” Banuelos said. “Where you can really have the most impact is at the local level, and every vote counts.”

Lopez’s life and death has left a lasting legacy that has inspired members of the Latino community to think critically about their local government.

“I think that there has been positive growth from Andy Lopez’s death,” Banuelos said. “Many people of color are running for positions in office right now and I’m very hopeful that we will start to see change. It’s going to take time but things will change. At least we will be at the table and we will be able to have a say in how things are shaped.”