Lost in debt: Campus bookstore may outsource to retail giants to offset deficit 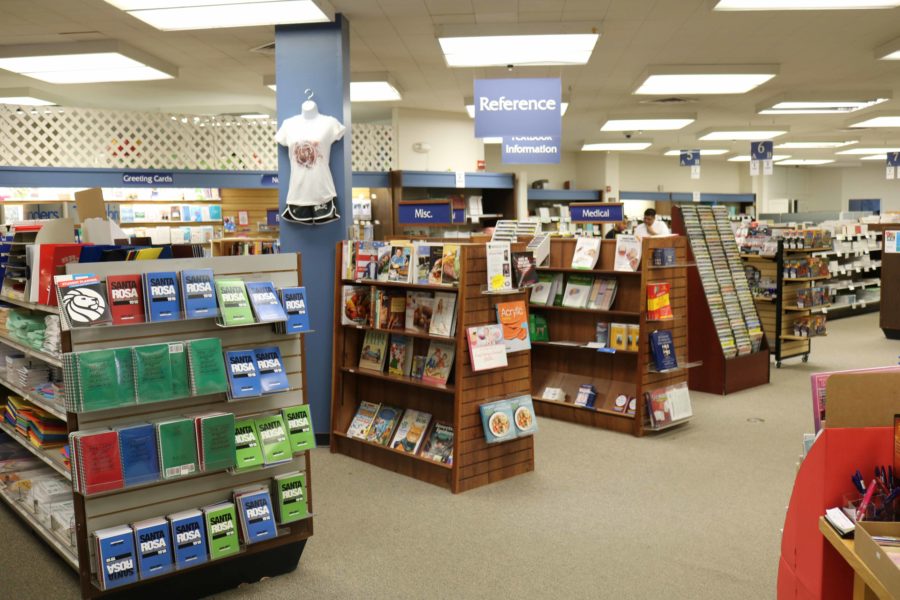 After a reported $700,000 deficit, SRJC officials debate outsourcing the bookstore.

Students go to great lengths to avoid textbook costs and now Santa Rosa Junior college may follow suit. The campus bookstore has run at a deficit over the last two years leading administration to look at outsourcing its storefront, according to multiple administrative sources.

Campus bookstores partnering with retailers like Barnes and Noble are common. SRJC could be the latest school to make the switch.

“We haven’t made any decisions,” said Doug Roberts, senior vice president of finance and administration services and assistant superintendent. “But it’s the sort of thing that we’re preparing ourselves for, maybe contracting out.”

The bookstore lost $700,000 in the last two years, according to SRJC President Dr. Frank Chong.

“When the bookstore isn’t profitable then the money comes out of the general fund to subsidize it. That’s when it’s crossed its line,” Chong said. “I prefer to keep the bookstore under our own internal control, but (retailers) have the efficiencies; they’re experts in it.”

SRJC administration is prepared to send a proposal request to the Auxiliary Enterprise Committee, an advisory body for the school president. Afterwards, SRJC students, faculty, shareholders and employees will review the proposal.

A decision is expected by the end of the current semester, according to Roberts.

Lost revenue from the last two years was absorbed by the bookstore’s retained funds from previous years. As of June 30, 2015, the fund balance fell to $651,414, down from more than $1 million two years earlier.

According to Roberts, sales have dropped 40 percent. Students are buying and renting books online, going to the library for books on reserve, and even exchanging book with other students.

“Teachers have been more conscious of the books they are choosing and their prices,” said student Jamila McGarry. “I work with other students and we’ll trade [books].”

Doing business with a large retailer offers the potential of lower prices and more used books, both in the store and online.

Roberts is concerned about “the confidence of the level of service” after any potential switch in operations. The Service Employees International Union represents SRJC employees and is uncertain of its role at an outsourced bookstore.
Students and the SEIU have to be assured that contracting is the right thing to do.

“A big corporation coming into a very locally and well organized school can have some detriments,” McGarry said.

Companies will compete for the opportunity to sell textbooks directly to SRJC, and Roberts is hopeful the school can use its leverage to get a good deal and keep potential partners sharp.

If SRJC decides to contract out its bookstore, transfer of management would likely take place in February or March 2017.