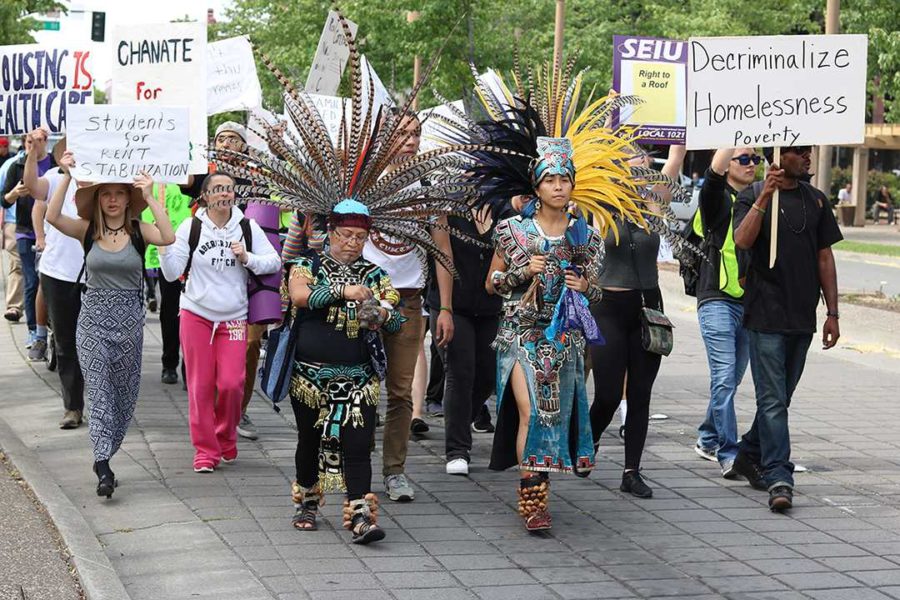 Aztec dancers lead the procession of passionate protesters on the way to City Hall.

Santa Rosa residents and students marched from SRJC to downtown Santa Rosa’s council chamber May 3 to ask the city council to consider implementing a rent control and just-cause eviction ordinance in wake of the past year’s spike in rental costs.

“We need solutions. We need answers. We cannot continue to live like this,” said Enrique Yarce, SRJC vice president of student diversity.

Yarce and Scott Rossi, SRJC student trustee, led the march down Mendocino Avenue, followed closely by a group of students and community members.

SRJC student Rose Kitchel said she marched for an opportunity to speak at the council meeting.

Participants chanted “Roll back the rents!” as they marched to the council chamber on the corner of Mendocino and Sonoma Avenues.

The SRJC students were not the only group fired up at City Hall. Various community members and organizations, including North Bay Organizing Project, rallied in the courtyard before the public meeting began. Community leaders spoke about their experiences serving populations most vulnerable to increased rent prices and frequent evictions. They also recognized the importance of addressing the issue immediately to avoid adding to the population of struggling or homeless families in the city.

“I have been a tenant attorney for over 20 years, and I have never in my life seen so many people be displaced because of rent increases and no fault evictions,” said Ronit Rubinoff, executive director for Legal Aide.

The council chamber was filled to capacity with attendees spilling out into the courtyard, where they were offered additional seating and the ability to listen to the meeting over a loudspeaker.

Council members heard statements from more than 70 citizens throughout the evening. Members of the community addressed both sides of the issue.

Council members heard from concerned property management companies and rental property owners who suggested the implementation of rent control would hugely affect their ability to sustain their businesses and their plans for future improvements.

Others expressed their opposition stating they didn’t think rent control was the answer to the housing crisis. Instead, they suggested the city look at options for more affordable housing. However, the vast majority of the attendees present were in support of rent control and just cause eviction.

Davin Cardenas, organizer with the North Bay Organizing Project, asked the council to heavily consider the moratorium and rent stabilization to protect the most vulnerable citizens in the city.

“Rent stabilization is the simplest tool we have to address the issue,” Cardenas said. “The people who are suffering are not the people responsible for the conditions.”

Council members concluded the meeting with a 4-2 vote to prepare a rent stabilization ordinance but didn’t gain the majority vote necessary to implement a moratorium immediately.

On May 10, following a less heated discussion the majority moved the moratorium to action. Tenants can now sleep soundly knowing their landlords may not raise rent more than 3 percent in the next 45 days or until the moratorium is in place.

“The rent stabilization ordinance and moratorium will not solve the housing issue, but it’s a step in the right direction,” Cardenas said.