The Oak Leaf • May 17, 2016 • https://www.theoakleafnews.com/news/2016/05/17/internal-debates-srjc-administrator-retire-filing-hostile-work-environment-complaints/ 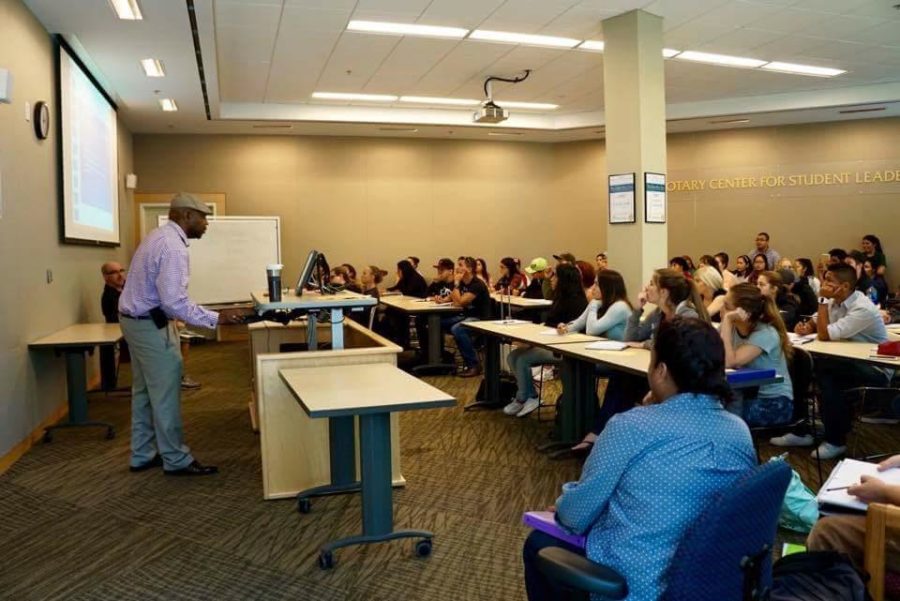 Dr. Dean Tahir lectures on conscious bias in a workshop in the Bertolini Center for Student Leadership.

Tahir sent an email to all faculty May 13 announcing his resignation and retirement effective July 30.

“The school has lost its most important link to the Black community,” said retired Baptist minister and longtime rights activist Ann Gray Byrd. “He withstood blatant racism and much discrimination. If requested, the NAACP will support, should he decide to file suit.”

The investigation report states the event that preceded Tahir’s complaints was the reorganization of SRJC’s student services department in fall 2014. Ethington was promoted from director to dean of student affairs and engagement programs. The director position was subsequently eliminated. With Tahir’s credentials and accomplishments as assistant director, the director position would have been the logical next step in his career, Tahir said.

“I questioned, based on my work, why wasn’t I considered, or even had a chance to apply for the director position. Why did they eliminate the director position right off the order chart?” Tahir said. “Anybody else at the college who was an assistant director that started with me over nine, 10 years ago…everybody had been promoted but me.”

According to Navarrette’s statements in the report, he assessed all positions in the department starting in 2013, and recommended five out of the 21 management positions be altered, Ethington’s included. Tahir’s job description wasn’t changed as part of the reorganization.

Tahir believes it was a personal reason why they didn’t promote him. “I think it was based on race. They had never career-tracked me,” he said.

He applied for the director position on the Petaluma campus five years ago, but didn’t get it because he didn’t have prior instructional background experience in a classroom at the time.

He asked Navarrette and Martin Lee, dean of counseling and support services, if they would mentor him on his career path at the school, and they both declined, according to Tahir.

Tahir said he had to go through the Association for California Community College Administrators’ mentorship program. He also completed the Administrator’s Managerial Certification program and served as an ACCCA district representative to recruit potential managers into the field.

Tahir said the director position would have offered him higher pay since he received his doctorate during the time he’s been at the college. Ethington stated in the report he wasn’t aware of employees receiving a salary increase for earning a doctorate.

“Up until Matthew Long was hired at Petaluma as dean of students, I was the only student services administrator who had a higher-level educational credential in the division, which I achieved in my time over the last 10 years,” Tahir said.

Tahir received his doctorate in 2009. In 2011, the school board approved an additional stipend for those at the college with a doctorate. Tahir said he heard from ACCCA and colleagues at other community colleges that the district, in most cases, will reimburse employees from when they first get their doctorate, yet he was never reimbursed for the two years he had his doctorate while working at SRJC.

Ethington told Tahir the board will only start paying once this stipend was approved and the pay will not be retroactive. Additionally, Navarrette said in the report that employees don’t get a pay increase when they earn a doctorate and that Tahir’s position doesn’t require a doctoral degree. The report, however, said Ethington recommended hiring Tahir “not only because he wanted to increase diversity in the department, but also because Tahir was getting his doctorate.”

According to the report, Ethington said he tried to broker deals for Tahir to get a pay raise, but “people above him in the food chain” didn’t support a salary increase for Tahir.

Tahir appealed to Ethington, saying he helped SRJC receive commendations from the accreditation team, many of which were tied to the multicultural events he assembles on campus.

“[Ethington] said he didn’t care what outside evaluators said. He said he’s my boss and the only thing that’s important is what he says,” Tahir said.

Last year, Tahir wrote a letter of complaint to Navarrette and Chong, stating he felt a pay inequity and discrimination in part because he said Ethington had not reviewed his job description in nine years. Tahir said according to ACCCA, management is supposed to review an employee’s job description every four to five years.

In his annual evaluation in fall 2015, Ethington reported that Tahir’s work performance “needs improvement” and was “unsatisfactory” in several areas. Tahir alleged Ethington compiled this negative evaluation, which required him to fulfill a 90-day Performance Improvement Plan, out of discrimination and retaliation for complaining about the reorganization.

In the report, Tahir said he received good performance reviews prior to complaining about the reorganization. Though the investigator noted the former evaluations were generally good, they regularly showed the same performance issues in communication and follow-through, which was reflected in his most recent evaluation in which many witnesses cited he was dropping the ball.

Many of the witnesses interviewed in the report noted Tahir’s strong suit is his work and relationship with the students. Ethington said in the report, “Tahir’s ability to work with and mentor students is excellent,” though he feels he hasn’t been tough enough on Tahir as he’s been neglecting his duties and hasn’t fully supported the Inter-Club Council, of which Tahir was adviser.

Tahir said he felt like Ethington was retaliating against him by “breaking up his job description” and giving his duties to Short-Term Non-Continuing Staff.

Student Body President Joshua Pinaula said while Tahir is a great friend to students, he didn’t feel like he was properly addressing marketing, ICC or the student life committee, so STNCS were hired to fulfill those duties.

“They’re Band-Aids for things that students have needed this entire time,” Pinaula said. “It’s coming out of our student budget to be able to have these positions; it’s because we functionally need these positions to operate.”

According to the report, the final straw for Tahir was when Ethington allegedly belittled him in front of vice president of student life Virginia Kerr at a spring welcome barbecue Jan. 27. As adviser, Tahir was supposed to be present for the totality of the event “to mitigate risk and provide supervision,” according to the report.

Ethington asserted Tahir wasn’t at the event for at least two hours because he was in his office. Tahir claimed he was mostly present for the event but had to rotate from his office to the quad and at one point had to attend an ICC meeting. Ethington said if Tahir was double booked, he should have asked student affairs coordinator Sahara Chaldean for help, but didn’t.

The report stated two other students interviewed during the investigation saw Tahir at the event, yet the report never provided their statements. One of the statements not used in the report was that of SRJC student and Black Student Union member LaMont Powell, who described Tahir as a valuable asset to the college.

“I am bearing witness that Dean Tahir was present from 11 in the morning to two in the afternoon,” Powell said in his statement. “There are several students who witnessed Dean Tahir set up for this event, as initially the music equipment was not working properly. Tahir also attended the Inter-Club Council meeting and was late because he had been working in the quad for the events that day.”

Ethington concluded that by being mostly absent from the event, Tahir violated his Performance Improvement Plan and was subsequently put on a three-week administrative leave, pushing his PIP completion date from April to May.

The investigator ultimately found that while Tahir is generally well-liked and a great mentor to students, there are deficiencies in his job performance. Additionally, the investigator found no evidence to support any of Tahir’s allegations and determined he was not subjected to harassment, discrimination or retaliation. From the date of the concluded investigation on May 2, Tahir has 15 days to file an appeal to the board of trustees.

Ethington notified Tahir that his last day with formal responsibilities in the student affairs office is May 13.

“I don’t see an element of fundamental fairness,” Tahir said. “[This has] sullied my reputation.”