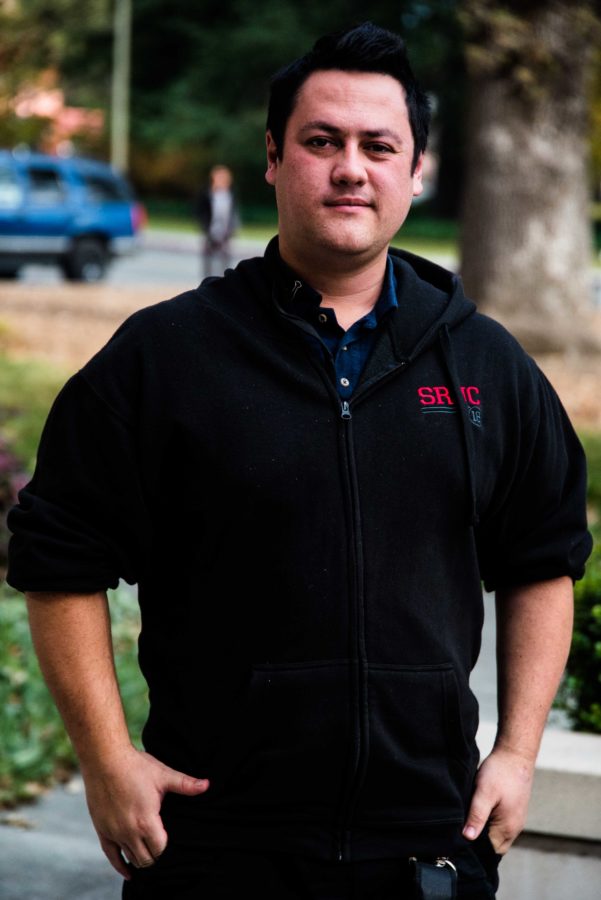 “I want to create an atmosphere and environment where students feel connected to the college and cared for," said Joshua Pinaula, student body president and SGA chair

“I never looked at myself as a politician, I really don’t still. I don’t do a lot of things politicians like to do,” Pinaula said.

Students elected Pinaula, 27, as student body president in 2014 and re-elected him last spring. Over his year-and-a-half tenure he’s ushered in some large changes.

Pinaula has had an unusual college experience. He enrolled at SRJC in 2007 after graduating high school. Although he started in SRJC’s theater program, Pinaula treated the college like a commuter campus and was not very involved.

While most students breeze through SRJC in a couple of years, Pinaula didn’t have that luxury. Within his first semester, physicians diagnosed Pinaula with lymphoma. He dropped out of school and started a chemotherapy regimen.

Pinaula dismissed his battle with cancer. “I wasn’t scared. I knew I was going to get out of it,” he said.

After his year-and-a half bout with lymphoma, Pinaula decided to pursue work instead of going back to school. He worked for three years, first at My Friend Joe’s, the campus coffee shop many SRJC students frequent. After a stint as manager there, Pinaula took a job on the assembly line at General Hydroponics.

Pinaula worked the graveyard shift at General Hydroponics. “I would spend eight to 10 hours a day locked in my head doing repetitive actions forever and ever and after months of doing this I felt myself getting dumber.”

This unfulfilling experience on the assembly line led to an important revelation in Pinaula’s life.

“I would rather be poor and go back to college than do anything else,” he said.

Once back at SRJC, that epiphany also triggered a strong desire to get involved on campus. Pinaula joined the Atheist and Skeptics Club, and eventually became president.

Pinaula identified the lack of club activity on campus as a problem he could fix. He wanted to foster an environment where students wanted to be more active in campus life, and clubs were the best way to do that. Although, Pinaula jokes, 10 percent of the reason he got involved was for the free food.

“Clubs are where my heart is. It almost epitomizes student life in my mind; involved students doing the things they care about.”

Pinaula became chair of the Inter-Club Council, serving from 2013 to 2014. That year he helped the number of clubs on campus grow from 35 at the beginning of his term, to 75 by the end. SRJC still boasts a whopping 70 clubs, a high for most California community colleges.

Pinaula assumed the role of student president in May 2014.

Some of his biggest and probably most long-lasting accomplishments will be the foundational structures he created for the Student Government Assembly, which he chairs.

“I think it’s really important to focus on your foundational issues. That’s why I got the constitution changed and the bylaws created,” Pinaula said.

Last spring, Pinaula simplified the SGA constitution, making it easier for students to amend. He created bylaws that offer more flexibility in the way the SGA operates.

The SGA chair insists one of his biggest goals is to “make it easier for great people to get involved.”

He executed this vision with the implementation of the Student Center Fee, which effectively doubled the SGA’s budget. This allowed the SGA to hold large events, create a bike repair station in Petaluma and hire another advisor to advance student issues.

“Josh is an excellent leader. Everything he does begins with, ‘How will this benefit the students?’” said Vice President of Student Life Virginia Kerr.

Pinaula wants to build upon this foundation even more by transforming Pioneer Hall, which is currently occupied by Disability Resources, into a dedicated student center. It would be a place where students from different clubs and communities could congregate. He envisions the center would provide office space, meeting rooms and a student resource center.

“I want to create an atmosphere and environment where students feel connected to the college and cared for,” he said.

Student participation on campus seems to have dramatically increased under Pinaula’s administration. Ninety percent of the student seats are filled on district-wide committees, reportedly an all time high. The number of clubs—70 on the Santa Rosa campus and 10 on the Petaluma campus—are greater than ever before.

He is also moving forward with plans to restore the fountain in the center of campus as well as make the student finance code more intuitive.  He hopes that simplifying the finance code will make it easier for student leaders to understand what money they have access to and how to access it.

“I want people to come out of the JC feeling like they were involved and cared for and to just spread that energy elsewhere so they can be successful,” Pinaula said.