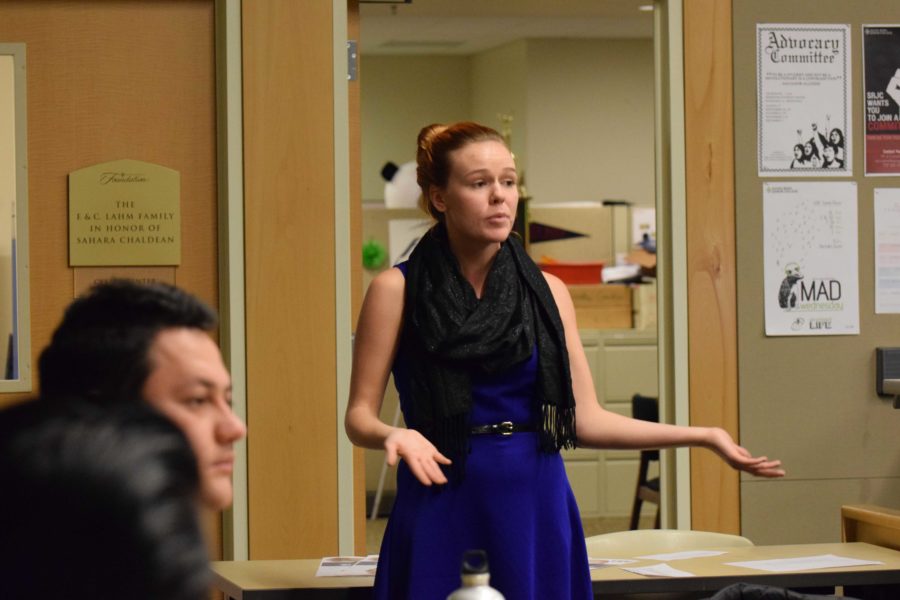 Tori Sheber, former assembly member of student rights, talks about the bill of rights during a Student Government Assembly summit she coordinated to review and revise the bill. “I want this to be an open process; it’s not an SGA resolution. This is a movement for students. This is a bill of rights for students,” Sheber said.

In an open forum Dec. 2, campus leaders reviewed a student bill of rights draft and debated its scope and particulars in the Bertolini Center for Student Leadership in the hopes that a version will be on the April 2016 student ballot.

“I want this to be an open process; it’s not an SGA [Student Government Assembly] resolution. This is a movement for students. This is a bill of rights for students,” said former assembly member of student rights Victoria Sheber, who coordinated the summit.

Building off of student committee drafts from last spring, Sheber and the Student Bill of Rights Ad Hoc Committee refined the 10-article document that lists fundamental student rights, such as freedom of information and due process.

In her presentation at the summit, Sheber outlined the committee’s goals for the forthcoming final draft.

First, members want the SGA to pass the bill as a resolution and then submit it to the Board of Trustees for that body to incorporate it into college policy. They then want neighboring community colleges and the Student Senate of California Community Colleges to ratify it and for the state legislator to eventually adopt it as law.

Sheber said a student-specified bill of rights would be an essential aid for those the student conduct and grievance process effects. “The problem is when a student goes through the grievance process, they’re alone and they don’t have representation,” Sheber said. The bill would be a resource students could refer to, and Sheber thinks it will legitimize student protections.

Multiple students brought up concerns about administrative treatment of students in conduct hearings. They mentioned a dubious lack of due process and information on their rights.

“If you are accused of something on this campus, you are going to go down for it. There is no representation,” said student Lamont Powell, 32.

After an instructor accused her of cheating this summer, Sheber underwent a student conduct hearing. Not only was the process confusing, she felt she couldn’t state her case without a teacher threatening her. It seemed to her SRJC was ready to hand out a punishment before she could even state her case.

“I want to see a student advocate so they can have a peer advocate, someone that is fighting for them and not also supposed to be fighting for the teacher,” Sheber said, explaining her idea for a special corps of student rights versed student volunteers to act as the equivalent of legal counsel in conduct hearings.

Student body president Joshua Pinuala said he also found the college judicial process confusing in his own conduct hearing and felt the college didn’t make his rights known to him.

The congregation of about 20 students and faculty members discussed the student bill of rights discrimination clause in political affiliation and absence of identification, among other ideas, in great detail.  Its current form includes language that would protect most classes of citizens. Attendees suggested expanding the language to include socioeconomic status; making the bill of rights inclusive as possible seemed to be an easy agreement to come to.

“I think it’s imperative for students to recognize they have the opportunity not to be a marginalized community because students as a whole are the future of our country,” said Melissa Debret, SGA member of special operations.

The student bill of rights would expand and cement upon discrimination protections, sexual assault rights and due process in respect to student conduct hearings.

“We parameterized more so in the discrimination article than the rest of California and the country does, which I think is really important in order to kickstart progression and embody that sort of development,” Debret said.

Many attending were disappointed with the lack of participation from the student body as a whole. Six clubs were represented out of 70 and a handful of faculty and administration were present.

Attending student Ignacio Velazquez said there should be more meetings. “We definitely need to bring in more people. We need to bring in all kinds of people here from different clubs because if they’re here they can educate their members and this word is going to be spreading,” he said.

“I really think this should be like a 150 to 200 person thing, because this is something serious,” Powell said.

Although turnout disappointed the summit’s organizers, many students still found the meeting productive.

“I think it was mostly productive on how it’s going to shape the movement going forward because now I think we have more clear goals, and now we know what we need to do, not only for the bill of rights itself, but how to go about doing this movement,” said student attendee Henry Tolchard.
Sheber plans to hold another summit in January with a revised draft reflecting ideas the attendees debated in the Dec. 2 forum.