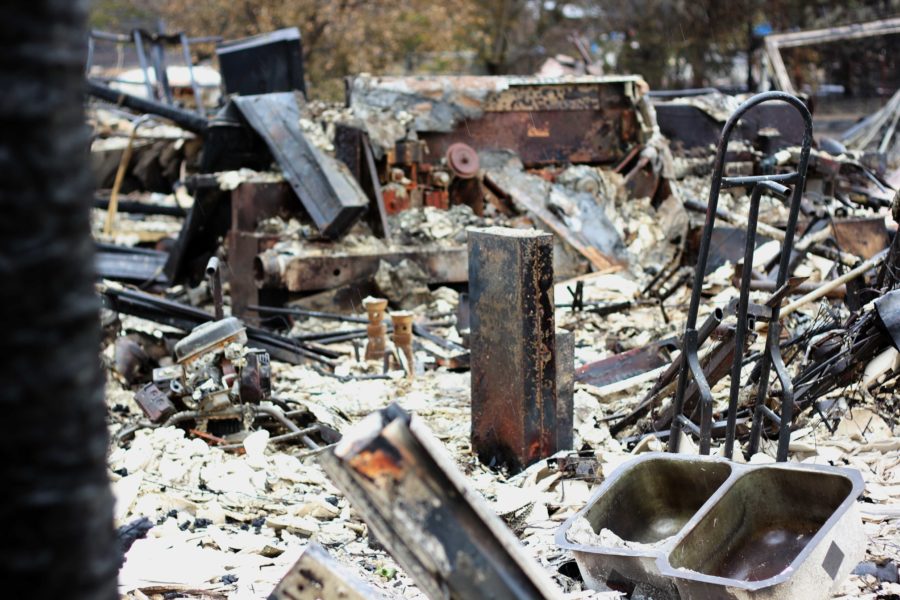 Rubble and ash was all that was left of homes in Middletown after the sweeping flames of the Valley Fire.

Santa Rosa Junior College student Cesar Macias worked hard to maintain a 3.7 GPA, but when the Valley Fire became visible from his house, his entire routine changed. Emergency personnel evacuated him to the Napa County Fairgrounds, where his family stayed for almost two weeks.

With his home in danger and his daily routine disrupted, Macias had trouble focusing on his schoolwork. He lost track of assignments and missed lectures.

“I couldn’t even get some of the things I needed because the roads were closed,” Macias said. “There was no point in going to class.”

Macias failed all of his classes this semester due to his inability to catch up with what he missed on account of the fire. “I have to retake all these classes and see if I can do it without all the distractions,” he said. “I need to go in more clear-headed.”

The Valley Fire displaced nearly 400 SRJC students, making it difficult for many of them to get to class and complete coursework. The roads to their homes were blocked off and the need to stay with relatives or at the fairgrounds became a distraction.

“I had no school books or supplies for a week,” said SRJC student Jerry Espinoza. Espinoza was another student that had trouble keeping up with his schoolwork.

Students who lost their home, like Eddie Amante, had the most difficult semester. Amante had to drop all of his classes this fall. He lost his home just outside of Hidden Valley Lake. Now he is living in a rental near his former home.

“Well for starters I left my backpack, so all my books, pens, paper and flash drives with work on them were all gone,” Amante said. “I really didn’t have a place to study being in and out of hotels and friend’s houses. When I went back to get my books at the bookstore, some were sold out and I had to get them ordered, which took time, and that made me fall further behind. The emotional effect of the fire itself kind of put me in a weird place where I really just wanted to drop everything and start over.”

Although the fire was a setback, Amante has already signed up for his spring classes, preparing for next semester. “I’m ready to go back. I have had a lot of time to think everything over,” he said.

SRJC student Ashley Hart also lost her family home in the fire. Adjusting to the loss has been hard for her. “It has affected [schoolwork] a lot, I’m sad to say,” Hart said. “I continue to think about my family at home, and I try to go home as much as I can, but I also made a commitment to the JC basketball team.”

The college is offering some relief to students the fire affected. SRJC held a silent auction and donated all proceeds to Valley Fire students. For students who lost books and other school supplies, the Edwin Kent Emergency Relief Fund is providing special grants to replace the lost items.