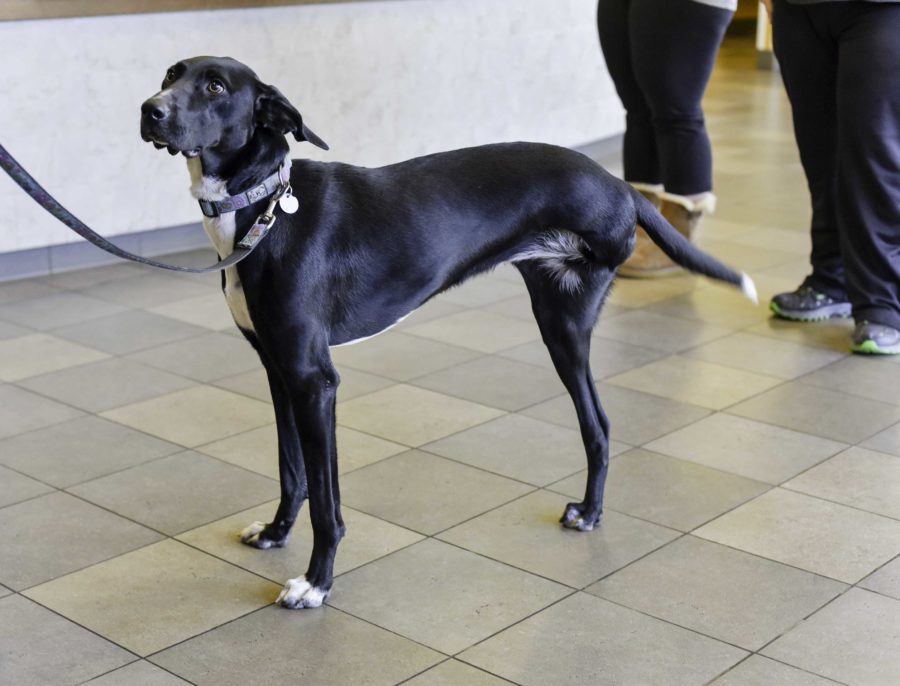 Daphne suffered fractures, skin infection and dermatitis to its leg before veterinarians amputated it.

Through attentiveness and hard work, three Santa Rosa Junior College students identified a maltreated dog and traced her to her abusive owner, whose hearing is Dec. 7.

Starting in fall 2014 and unfolding over the course of several months, veterinarians, kennel workers, animal patrol officers and three SRJC students helped save the puppy, named Daphne at the time, and bring the abuser to trial.

Daniel Famini, SRJC Vet Tech Program coordinator and veterinarian at Sonoma County Animal Services, said, “We do get dogs that are thrown away all the time at the shelter. Animal abuse is very common. What is rare is that we know enough information to be able to have the DA prosecute.”

According to District Attorney Jill Ravitch’s August 2014 press release, McKnight told his dog walker that Daphne fell down a set of stairs and injured her leg. The dog walker testified that Daphne’s hind leg appeared dislocated and twisted outward.

Almost two weeks later, the dog walker took Daphne to Santa Rosa Veterinary Hospital where doctors determined the leg was broken and needed surgery. The dog walker paid $3,000 in medical expenses when McKnight said he could not afford it.

Nearly a week after McKnight claimed he gave Daphne to a shelter, animal control found her in a creek ravine off Nuns Canyon Road near Glen Ellen after someone reported hearing a whimpering dog amongst a pile of garbage, according to the DA’s press release. McKnight admitted to abandoning the dog but lied about the location, saying he left her near Travis Air Force Base off Highway 80 when the dog was found more than 40 miles away.

Animal control brought the shell-shocked and emaciated puppy into SCAS. Her hind leg was covered in a rotting, creek-soaked bandage and a non-functional splint, causing greater pain and instability to the leg as well as dermatitis and a skin infection.

Famini said x-rays of Daphne’s leg revealed two additional fractures to the formerly repaired break. McKnight subjected the puppy to such poor conditions after the initial surgery that it broke a second time and the third break occurred after he dumped her in the creek.

“Because of the multiple fractures and the way the bone had callused, the leg was never going to work for the dog again, and so I had to amputate the leg,” Famini said.

In October of 2014, Famini brought x-rays of Daphne’s broken leg into his imagery and laboratory procedures class, Animal Health 151. The dog had just come into SCAS and was unidentified at the time.

Darien Smith, veterinary assistant and retired chief petty officer of the U.S. Navy for 20 years, was one of the students attending Famini’s class when he showed the puppy’s radiographs.

At the time, Smith worked as a kennel assistant at SRVH. Smith said she recalled a puppy they admitted having a badly healed fractured femur repaired and one of the veterinary assistants told her about the procedure, which involved a unique cross-pin technique.

“It was very interesting, with crossed pins placed in the femur,” Smith said. “I had never seen anything like that, and it made a lasting impression on me.”

When Famini showed the x-rays of Daphne’s leg in class, Smith recognized the placement of the pins and said the timing, type of injury, age and breed all matched the puppy that came into the hospital months before.

Famini brought the dog to SRVH where they confirmed Daphne’s x-rays matched the dog Smith heard about and they discerned through past medical records that the dog’s original owner induced the injuries and didn’t do anything about it.

According to Famini, a few weeks after the initial surgery McKnight refused to talk to the clinic about follow-up care and claimed he gave the dog to a shelter, when in reality he threw her in a creek. Famini said they believe he did so with the intention or idea she would die there.

Smith said if McKnight had taken Daphne to SCAS early on, she would have had a good chance for recovery and adoption.

“The previous owner had plenty of options for finding someone to take the puppy if he felt unable to take care of her,” Smith said. “Instead, he chose to throw an injured, helpless, baby animal into a garbage dump, regardless of the suffering it would cause her.”

Stormie Prosser was another student in Famini’s class when he showed the radiographs. That’s when she made the connection between the abused animal and McKnight.

“I was immediately appalled and my brain was trying to connect the pieces,” she said. “It wasn’t until another classmate, who was working at the hospital the dog was seen at, said something about the man that made it click.”

Prosser worked at Countryside Rescue in Santa Rosa at the time when McKnight told her he had to give Daphne back to the rescue. She made the connection when a classmate mentioned his military status and she realized the dog matched McKnight’s dog’s description.

McKnight adopted another puppy from Countryside Rescue less than a week after he threw Daphne into the creek. Prosser said once she realized McKnight was the same man who abused Daphne, the kennel put a hold on the adoption and officials confiscated the dog from him.

“This was no accident. He thought this all out and lied intentionally because he knew what he did was wrong,” Prosser said. “There is a special place in hell for those who hurt and let animals suffer.”

Famini brought Daphne into his nursing class, Animal Health 120, to show students an example of nursing and recovery in pre/post-surgery. Student Shelby Reed recognized Daphne in person because McKnight brought the dog into Banfield Pet Hospital where Reed worked after he broke the dog’s leg the first time.

Doctors at Banfield took x-rays and recommended care for the dog but McKnight refused to treat her and defaulted on his bill for the consultation, which was sent to collections. Veterinarians didn’t administer initial care to the dog until McKnight’s dog walker took her to SRVH.

Famini said he commonly uses medical records from shelters in class since they are public domain, but this was the first time it led to solving an animal abuse case. “This only happened because the students were sharp enough to recognize one of many patients they see every week, or one surgery out of all the ones that come through,” he said.

The DA’s press release noted the SRJC students’ involvement in the case when they recognized the dog and traced her to McKnight, leading to his arrest.

Until his sentencing date, Judge Julie Conger instructed McKnight to complete 300 hours of community service, concentrating his service hours in various animal shelters to demonstrate his remorse. Famini said the decision to have McKnight volunteer at animal shelters was “inherently problematic and wrong-headed.”

Over the objection of the DA’s office, Judge Conger said she might reduce the felony charge to a misdemeanor, much to Famini and Ravitch’s dismay.

“I can’t understand what the reasoning would be,” Famini said. “The previous judge [Judge Peter Ottenweller] said this was clear abuse.”

In the DA’s press release, Ravitch stated, “The Sonoma County District Attorney’s Office takes issues of animal abuse very seriously. When someone takes care and control of an animal it is their obligation to reasonably care for that animal. This defendant fell far short of that standard. The delay in sentencing and consideration of a reduced charge are not supported by the gravity of the offense.”

Famini created an online petition to persuade Judge Conger not to reduce the charges. He also thinks part of McKnight’s sentencing should include a prohibition on ever being allowed to own animals again. The petition letter discusses the medical perspective of the case, depicting the suffering Daphne had to endure for months due to McKnight’s abuse and neglect.

Prosser said she supports Famini’s petition to maintain a felony conviction. “I hope that his crime will be recognized as animal cruelty, which is now a federal crime and felony, and not brushed off.”

Smith also said she supports Famini’s position about maintaining a felony conviction. “That puppy was a loving, living animal that didn’t deserve to be treated like a piece of garbage. Who can say how much she suffered before she was rescued, and she could have died,” Smith said. “I think that a person who has no concern for the life and suffering of another living creature is very dangerous.”

Famini’s petition currently has just more than 3,000 supporters and needs 5,000 signatures to reach its goal. This is the link to the petition: https://www.change.org/p/judge-julie-conger-animal-torture-is-not-acceptable-maintain-mcknight-s-felony-conviction.