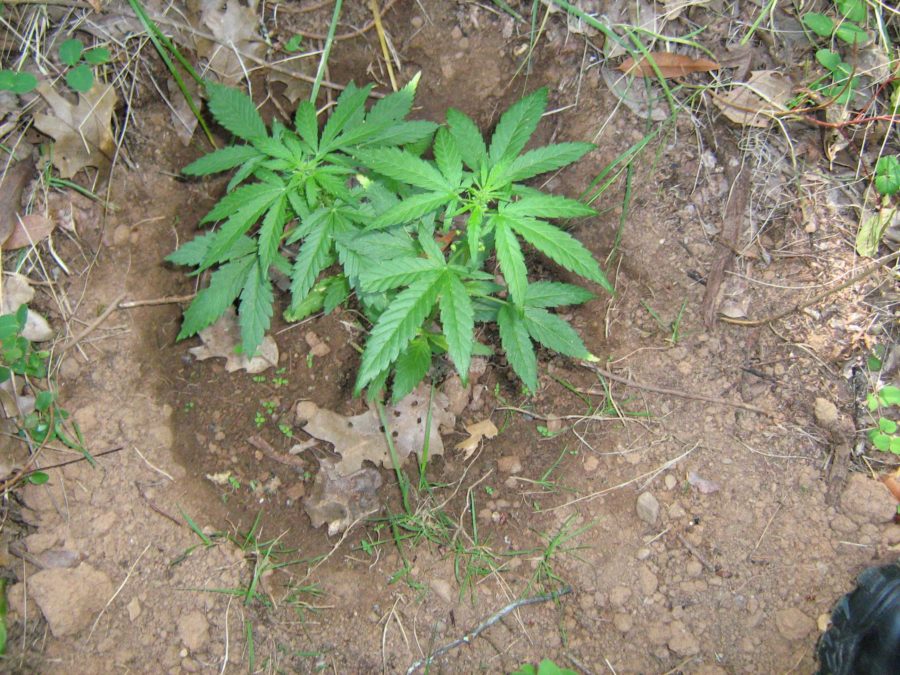 More than 5,400 cannabis plants had to be eradicated from the premises of SRJC’s Shone Farm, costing the college over $47,000.

Between Healdsburg and Forestville, near where the Russian River turns a lazy corner from west to south and oozes its way underneath the rusty steel span of the Wohler Bridge, there, on a manzanita-clogged hillside full of poison oak, a Santa Rosa Junior College district employee discovered an extensive marijuana grow operation on the school’s Shone Farm property in March. This was the second discovery of an illegal marijuana operation on the property in three years.

SRJC District Police Lt. Robert Brownlee recalled he and the three other officers, armed with rifles, gave chase to an individual who fled after being discovered at the grow site March 25. The officers requested assistance from the Sonoma County Sheriffs Office deputies, who set up a perimeter around the area. Officers continued to search for the suspect, but it became too dangerous to continue the pursuit and Brownlee called it off.

“At one point he went into this dense brush where you would have to kind of crawl to get under. At that point, we didn’t feel safe going into that. Somebody could be lying in wait with a firearm to come after us,” he said.

Former police chief Matthew McCaffrey was the chief for the initial operation to apprehend the suspect, and it is not clear how much actual involvement he had in the decision to carry out the raid. A source with knowledge of the department’s workings at the time stated McCaffrey was not around very much during his last week. At the time of the initial raid, a decision was made to leave the plants in the ground.

Repeated unanswered requests have been made for clarification about who made the decision to leave the plants growing, and who made the initial decision to conduct the raid on Shone Farm without coordination and cooperation with the Sonoma County Sheriff’s Drug Task Force, which is proper procedure for such raids.

The Oak Leaf was unable to obtain an incident report on the March 25 operation by press time.

Brownlee assumed the station of Interim Chief of Police March 30, 2015 and was in charge only for the second operation to eradicate the plants alongside the SCSO eradication team.

The grow, which cost SRJC more than $47,000 in environmental cleanup efforts to date, contained more than 5,400 cannabis plants and had a simple but extensive irrigation system.

According to Brownlee, the grow operation was on a hard-to-access portion of the property and the growers had a more sophisticated irrigation system than the previous grow.

In 2013, officers found a couple hundred plants on the property and the growers dammed the creek bed to get irrigation. They ran hoses down to where they collected their water and electric pumps were irrigating the land.

“With this one, [they were] a little bit more sophisticated. They were actually up here on this ridgeline, and they had dug holes and were collecting water in the holes and were using gravity to irrigate the plants a little more,” Brownlee said.

Leonard Diggs, Shone Farm manager, recalled the 2013 grow as much smaller as well.

“Two years ago was the first time, and our law enforcement, District Police and sheriffs came in and cleared the site. Nobody was there. They just basically pulled up the plants,” Diggs said.

Diggs said the recent grow site was in a similar vicinity as the 2013 one. “Same situation, a combination of District Police and the sheriff going in, and when they went in there were actually some people who were there who fled. We don’t know who they are. They were there probably tending the site,” he said.

As to how the growers were able to access the property in a manner that avoided previous detection, Diggs and Brownlee agreed the growers accessed the site from an adjacent property.

“It’s not a place that you can easily get to, and it’s on a place we believe that one of the easier ways to access it is through our neighbor’s property,” Diggs said.

Brownlee agreed, “I believe that they were coming in through the regional park somehow.”

According to Sonoma County Regional Parks website, Riverfront Regional Park, which borders the SRJC’s property, has access to picnic facilities, three miles of hiking and equestrian trails surrounding Lake Benoist and a half-mile trail through a grove of coastal redwoods.

Brownlee believes this public park afforded access for the growers.

After law enforcement destroyed the plants and secured the area, the problem of what to do to repair the site remained. Diggs worked with Tony Ichsan, dean of facilities planning and operations, and Doug Kuula, manager of environmental health and safety and a representative of EBA Environmental, to formulate a plan to reverse the environmental impact of the illegal grows and return the site to its former pristine state.

Diggs made sure there was an evaluation phase before any SRJC staff attempted to clean the site.

“I didn’t feel that it was safe to send our staff into a place to cleanup without real clear knowledge of what the environmental concerns are,” he said.

Matt Earnshaw, project manager at EBA Environmental, the company awarded the contract to clean up the site, said his company would not be finished at the site for a few more weeks, so EBA’s final report would not be available for at least a month.

Paul Bielen, SRJC director of facilities operations in Santa Rosa, said although the $47,000 cleanup bill may seem like a large amount, it is important to remember the responsibility the college has to the community.

“I know it’s a lot [of money] but we have to do it as a public agency. We have to do the right thing every time, all the time,” Bielen said.

The SRJC Board of Trustees unanimously approved the contract with EBA at their meeting on Nov. 10.