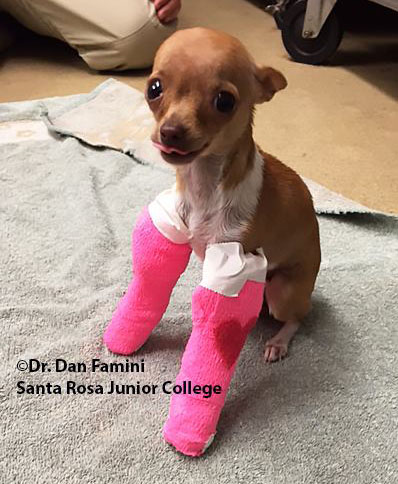 Veterinarians and foster parents cared for Darla the Chihuahua during her last few weeks of life.

Sonoma County Animal Services took the puppy into the county’s animal shelter where the staff named her Darla and estimated she was between 12 and 14 weeks old.

In a detailed message about the dog’s medical care, Dr. Daniel Famini, SRJC Vet Tech Program coordinator and veterinarian at SCAS, said a veterinary orthopedic surgeon offered to perform a special repair she required, which the shelter was not able to provide.

“Knowing that a small, young patient having an extensive procedure was higher risk, we took extra precautions and vigilance as we supported Darla through the bone plating procedure on both her front legs,” Famini said in his message to the school. “During the two-hour surgery, the extent of her unhealthy callousing was evident and this validated that a procedure of this level was required to save her legs.”

Famini said Darla went into cardiorespiratory arrest shortly after the procedure was completed. Doctors immediately started CPR and were successful in restarting her lungs and heart, but her cortical brain function never returned. She was placed in ICU level care when her vital signs appeared stable, but she died in her sleep a few hours after the surgery.

Famini expressed his gratitude to those involved in caring for Darla. “I, along with everyone who has been involved with Darla, am truly heartbroken at her outcome,” he said. “At the same time, I am sincerely grateful for everyone who provided Darla with these last two weeks of comfort and love.”

Darla’s tragic story touched those in the surrounding community, and coverage of her neglect and pain spanned worldwide. The Oak Leaf article reached news media in France, Spain, England, Germany and Mexico.

Simona R. Stefanescu, SRJC marketing and social media coordinator, said the college put out a plea on Facebook asking people for any information about the puppy and the post quickly reached more than 156,00 people, received more than 440 comments and more than 2,200 shares.

Facilities and operations groundskeeper Syda Khaleck found the puppy in the Bech Lot dumpster as he was throwing away garbage on the morning of Oct. 27.

Animal Control Officer Justin Foster filled a report and notified the Santa Rosa Junior College District Police on Oct. 28. Investigation on who threw the dog in the dumpster is still ongoing.

If you have any information regarding the case, call the SRJC District Police at 527-1000 (Case Number Reference JC15-0554).