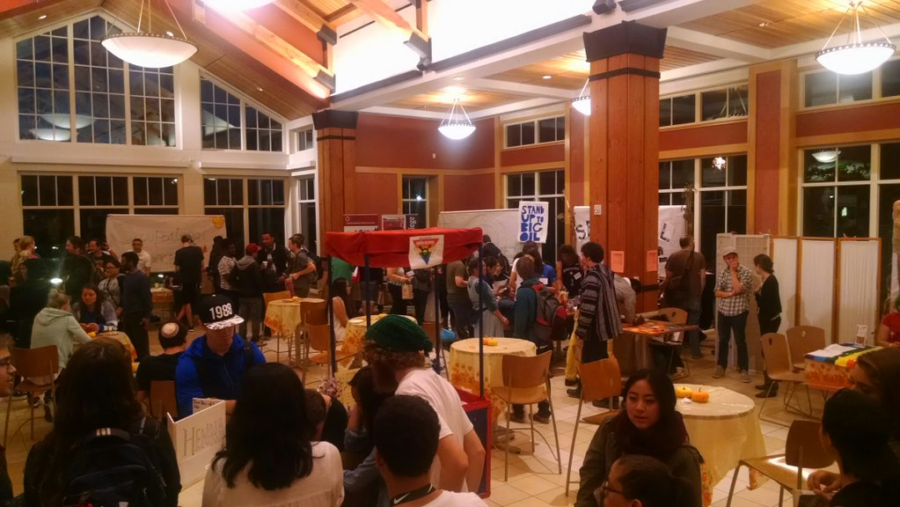 The atmosphere was eccentric. Students of all ages bustled from booth to booth with paper bags strung from their arms.

It was a night filled with entertainment, music and a raffle for students to win prizes. The Wellness Fair gave students the opportunity to connect with campus and community resources while learning to enhance every aspect of their health.

“[The wellness fair is] all about making sure that students build community,” said SRJC president Dr. Frank Chong.

Some people ate the free food, some hula-hooped in an open area used for numerous activities, but most people interacted with each other and with volunteers in the booths.

Students were given a chance to explore the seven realms of wellness: physical, intellectual, emotional, spiritual, social, occupational and environmental wellness.

The SRJC Hockey Team occupied the physical realm, where players set up a miniature hockey rink for others to play a game. Stephen Wolmarans, team president and alternate captain, said the team plays every Friday and Saturday, usually at 8:30 p.m.

“We get almost 500 fans in there each night,” Wolmarans said. “The energy is amazing.”

The English club contributed to the intellectual wellness portion of the event and one of the volunteers, SRJC student Lauren Herbert, 20, described one of her favorite moments when a woman approached her booth and the two began conversing. The woman plans to return to school after being away for a while and had concerns about returning.

“She was really afraid,” Herbert said. “She asked us for tips about maintaining intellectual wellness while dealing with challenging course expectations. We had a long and meaningful conversation, and I think that really reflected the goal of the fair. I think she walked away feeling a little better about being a new student.”

The occupational realm provided students with ways to earn credit for their current jobs and ways to get future jobs.

Those representing the environmental realm gave guests the opportunity to build their own structure with Play-Doh.

SRJC student Chelsey Kolbeck, 28, volunteered in the Shone Farm booth in the environmental realm. She discussed the Tiny House Club, which seeks to build affordable houses that will bridge the gap between housing for farmers and students.

Kolbeck also promoted the Community Supported Agriculture program that grows and sells local organic food. She shared why she became interested in these programs. “I used to work in an office, but then one day I put my hands in the soil, and I loved it. I have done it ever since,” Kolbeck said.

Under the spiritual realm banner, the art club painted people’s faces while the Philosophy and Comparative Religions Club engaged in rigorous conversations.

A Christian fellowship called Intervarsity also represented the spiritual realm. Upon arriving at the Intervarsity table, guests could write a prayer or positive thought on a sticky note and place it on the board. Representative Cassie Tsolis said, “I want [people] to experience a community where they feel welcome and accepted, so they can come as they are.”

The social realm offered students opportunities to join clubs and become active in their community.

The emotional realm seemed the most popular, with many different clubs and organizations coming together on a difficult topic. Student Jessie Ploski said, “My favorite realm was the emotional realm because the guy was super helpful and gave me a lot of resources.”

The SRJC Cheer Team gave a performance full of school spirit. Members lured the crowd in with their chants, yelling, “Let’s go, red and blue.” In the back, cheerleaders waved the SRJC school flag that swayed like a pendulum to the rhythm of the words. Even Rosco the Bear Cub mascot made an appearance clad in a rainbow feather boa.

SRJC student Kaitlyn Sackett admired all that was being done for the students and the community.

“The fair was a fun evening full of support, love and connection,” Sackett said. “The SRJC clubs and volunteers did a great job spreading the importance of well-being unto peers and offering a safe place to seek guidance for those that need it.”

A large poster stretched across an entire wall with two tree cutouts on each end. The top read, “What does wellness mean to you?”