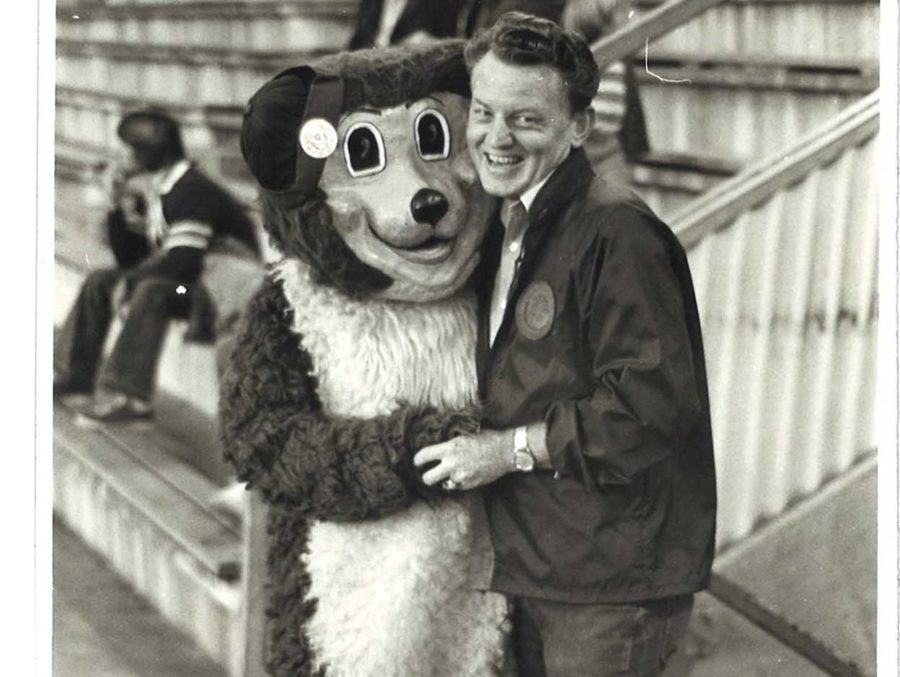 Canevari, a Santa Rosa native, served from 1966-1988 as SRJC’s assistant dean of student services, director of student activities and later as a counselor. He also advised student government.

The SGA commended Canevari’s dedication to student life. “Canevari provided effective advising and support, and through his hard work, quick wit, caring and generous nature, outspoken advocacy and unwavering commitment to students, he has compiled an extensive record of academic and civic achievements,” an excerpt from the resolution reads.

As director of Student Services, Canevari guided Pioneer Hall’s remodeling and the Doyle Student Center’s renovation with a lounge and game room, according to the resolution. The Bertolini Student Center replaced Doyle in 2009.

Canevari dedicated the fountain outside Pioneer Hall to students of the past, present and future, a 1985 Oak Leaf feature article states.

The fountain, long in disrepair, has been a campus landmark for more than 75 years. Kenneth Bryant, an SRJC maintenance employee and athletic equipment manager from 1935-1953, designed and hand-built the fountain with other classified staff. He was the college’s first classified retiree.

An SGA delegation presented Canevari with a framed copy of the resolution Oct. 23 at his Santa Rosa home.

Adrienne Leihy, SRJC graduate and co-founder of the SRJC Historical Society Club stumbled on Canevari’s legacy about two years ago while sifting through student government archives.“I kept seeing this person and all these different pictures with all these students and I was like, ‘who is this person?’” she said.

“It wasn’t until I read the old Oak Leaf article that I even knew it [Pioneer Fountain] was dedicated to students,” Pinaula said.

Leihy created the Fountain Restoration Fund in 2013, which she said totaled approximately $300 when she last checked the balance. She said the fountain periodically worked when she attended SRJC about 10 years ago but now only sees it spurt on occasional graduation ceremonies. “It really seems like an iconic part of the JC’s history is in disrepair,” she said.

The resolution does not outline a budget or timeline for the fountain’s repair, but Pinaula said he would set those in place during his term, which ends May 2016. “There’s a history to that fountain and it’s time for that fountain to get repaired.”

Student leaders will install a plaque on Pioneer Hall, the campus’ oldest building, commemorating Canevari’s service. This resolution dedicates Pioneer in Canevari’s esteem but does not rename the structure.

Canevari attended SRJC as a young man and earned an English degree from UC Berkeley in 1956. He returned home and taught fifth grade at Rincon Elementary School and owned a successful local business, Calico Hardware. He then joined SRJC as a student government advisor in 1966, when the college had only 2,800 students.

The student services director also acted in the film “Storm Center” with Bette Davis and Brian Keith, a performance Canevari told The Oak Leaf in 1985 that everyone should miss.

He said in the interview that one of his fondest memories at the college was receiving an award from handicapped students for his unique care.

Esther Oertel, a student leader who worked with Canevari, said, “I think he saw his job there as a mentor to students first and as an administrator second. It meant a lot to him to see the students he worked with succeed in life, for he had a genuine deep, caring for the students.”

Oertel was SRJC’s first student trustee, serving from fall 1978 to spring 1979. “[Canevari] really believed in the whole role of student activities and having a dedicated office and dedicated staff members just for the students,” she said.

“To me, he almost seems like the most ideal adviser and student advocate that one can have going through administration,” Pinaula said of Canevari’s legacy. “If you can picture someone whose life is to ensure that student concerns are figured out and student life is vibrant, he really seems to be that person.”

The resolution begins with this quote from Canevari: “I am not much impressed by surveys of what other community colleges are doing or not doing. If we are the best — and I think that we are — then there are a whole host of things we should be doing that other community colleges are not. One of those things is maintaining our support for a strong student government and student activities program.”