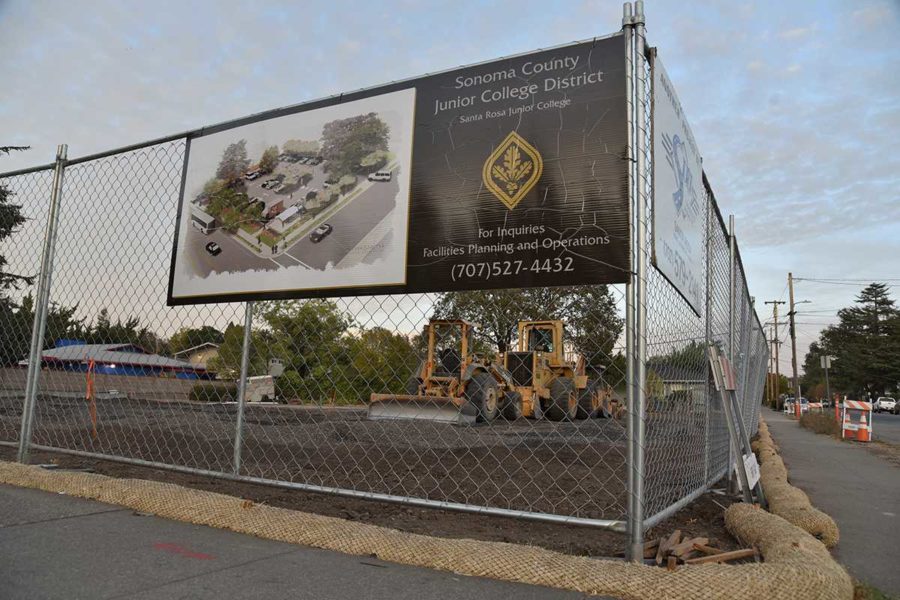 The planned 43-space parking lot on the corner of Mendocino and Carr avenues will ultimately cost SRJC nearly $1.7 million.

When The Oak Leaf conducts “person on the street” interviews with Santa Rosa Junior College students to find out what challenges they face at school, invariably parking is at or near the top of the list.

It is only natural the college’s administration addresses these concerns by securing more parking.

The Don Zumwalt Parking Pavilion at the southeast corner of the campus is a prime example. Built with Measure A funds in 2006, it boasts more than 1,100 spaces meant to ease students’ burden of finding a parking spot.

Nearly a decade after constructing Zumwalt, SRJC still faces severe parking congestion, and is again attempting to address the issue. This time, the school has approved the construction of 43 parking spaces at 1710 Mendocino Ave., a property SRJC purchased in 2013.

College officials provided documents showing the property cost $1 million and required the demolition of two buildings that were on the lot. The demolition was contracted out to Daniel O. Davis Inc. for $36,900. The subsequent paving and landscaping of the lot to prepare the 43 parking spots is contracted to Siri Grading and Paving, a Santa Rosa construction company. The school has contracted with Siri to prepare the lot for $660,000.

Tony Ichsan, dean of facilities planning and operations, said the spots will be available to anyone with a parking pass and will follow a schedule similar to the lot adjacent to the Burdo Culinary Arts building.

Richard Owens, owner of Siri, said the cost of preparing the lot for the 43 spots is high partly because they must abandon the property’s existing utility connections. Owens said nearly 18 percent of the contract’s cost is from this abandonment, which requires digging up Mendocino Avenue in three spots to remove things like sewer and water connections.

“It’s not a cheaply-built parking lot,” Owens said, “It’s designed to last. It has a lot of nice features.”

Some of those features include $100,000 worth of trees and landscaping, which will include a patio seating area.

At the current rate of $60 per parking pass per semester, if the SRJC sells two parking passes per spot per semester, it will take about 168 years worth of sales to recoup the nearly $1.7 million the school has spent to provide these 43 spots. The Don Zumalt Parking Pavilion, which was completed in 2006 and provides 1,100 spots cost the school $38 million, according to a June 2014 report detailing Measure A spending to date.

As far as the cost of the lot is concerned, Freidig expressed surprise. “I have an idea what a house goes for, but I have no idea what a parking lot goes for. Although, it does seem high to me, and I don’t know why,” he said.

SRJC Board of Trustees President Jeff Kunde said while the amount spent on the parking lot may seem like a lot, it is really quite reasonable given the different interests that had to be taken into account.  “Is it expensive? Yes it is,” Kunde said. “When you acquire a piece of property adjacent to the school, that’s pretty valuable; that’s hard to measure.”

Kunde said he believed concerns neighbors expressed influenced the decision to include so much landscaping and beautification to the property, but The Oak Leaf could not verify these concerns by press time.

Edit: An earlier version of this article online and in print listed Tony Ichsan, Dean of Facilities Planning and Operations as VP of purchasing.