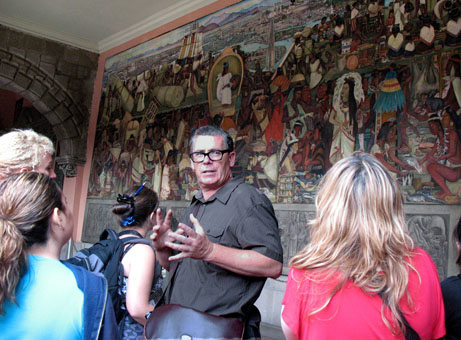 Dr. Pohl takes students on trips to learn from other countries.

Exploring past worlds, seeking out old life and ancient civilizations. This is what Dr. John Pohl discussed in his lecture titled “Children of the Plumed Serpent: The Legacy of Quetzalcoatl in Ancient Mexico.”

He talked to a crowd about his beginning in archeology and his exhibition Oct. 18 in Ellis Auditorium at Santa Rosa Junior College’s Petaluma campus.

The Archeological Institute of America, the oldest and largest archeological organization in America, sponsored Pohl’s lecture.

He studied at UCLA and has a background in media, theater arts and archeology. He is also a UCLA professor of art history.

It all began for Pohl at age 13.  He became interested in the American Indian movement happening in Minneapolis while he was living there.

After an internship at the Tyrone Guthrie Theater, he tried to figure out how to combine media, theater arts and archeology. It wasn’t until he visited the National Museum in Mexico City that he understood how people were able to combine those concepts.

“I was dumbstruck by the fact that the National Museum was using theatrical techniques in order to exhibit much of their artwork,” Pohl said.

One of the exhibitions Pohl discussed in his lecture has been taking place in downtown Mexico City. During the time of his exhibition he had a revelation of what the Aztec city was like and how the wealth of a 250,000 person city emerged to rapidly dominate Central and Southern Mexico.

His second major exhibition was based on his own research of looking at the Mixtech civilization together with the Zapatec.  During his research he discovered these people didn’t create monumental sculptures.  He wondered if these two kingdoms would have been able to agree on what to carve on the monuments.

This exhibition presented masterpieces in different forms of art, like textiles and polychrome ceramics.  This is the art of the Southern Mexico people.

Pohl has also conducted other exhibitions that brought ancient civilizations to life.

“I thought it was great that he took his art history [and archeology] background and incorporated the two,” said SRJC student Kaitlin Carleery, who is currently double majoring in anthropology and art history. “I thought that he melded his passions well together.”