Lanakila over science: Preserving culture and the environment 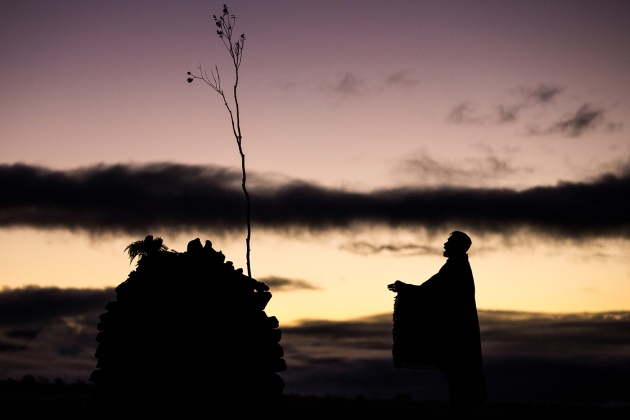 Mangauil shared Hawaiian science ideologies, creation stories, legends and traditional practices with the goal of educating others about the interdependence and relationship that Hawaiian people have with their land and the world in a free lecture at the Santa Rosa Junior College planetarium Oct. 13.

By 7 p.m. the long line to enter the show stretched around the outside of the planetarium building, and with limited seating, people crowded into the event, but not all could enter. Before the show started, Hawaiian music played inside the planetarium while black and white projected photos adorned the ceiling.

As a leader of the Ku Kia’i Mauna (Guardians of the Mountain) Movement, he emphasized the sacredness of Mauna Kea and the need to protect the mountain and its environment from the construction of the Thirty Meter Telescope.

The Thirty Meter Telescope is set to be built atop Mauna Kea, the highest mountain in Hawaii, but construction was delayed after many non-violent protests that seek to stop the construction of the telescope completely. Mangauil participated in many of these protests. The Thirty Meter Telescope plans to be one of the largest telescopes in the world.

Mangauil recounted the history of the Hawaiian people and the loss of their traditions and practices after transitioning from a chiefly system to a monarchy. Native Hawaiians faced such discrimination that “if you [spoke] the [native] language, you were beaten,” he said. This discrimination almost eradicated native culture. “Eventually, the elders stopped speaking the [native] language.”

In the 1970s, Hawaiian activists began advocating, reintroducing and embracing Native Hawaiian culture and “the language came back, [and] bloomed into Hawaiian immersion schools,” Mangauil said. These schools consist of going “outside and look[ing] at our mountain and our river and our fish.” Chants and hula also helped preserve the cultural traditions and stories of native Hawaiians.

Mangauil explained the interconnectedness of Hawaiian scientific observations, creation stories and cultural practices that influence their relationship with their mountain Mauna Kea.

Mangauli tells the Hawaiian creation story of the universe, the earth and humanity. “In the beginning there was nothing and suddenly there was a little wisp in the void of nothingness,” Mangauli said. That wisp created motion and that motion created the universe.

Earth Mother and Sky Father came together to create the stars and the Islands of Hawaii. Sky Father desired the stars and conceived a stillborn child and then Sky Father buried the child in the earth. The stars grieved and cried, and from the stars’ tears and the buried child came forth a plant Kalo (Taro).

The second child born human from the sky and stars must always respect and care for its older sibling, and in doing so the older sibling would nourish the human generations to come.

Taro is still an important food source for Hawaiians and its product, poi, is sacred to the people because Hawaiians believe that ancestors are present when poi served.

Mauna Kea is considered sacred to Hawaiians because it is part of the creation of the universe, and in their creation stories, it is a sibling to humanity. “When we look at that mountain it is the eldest child,” Mangauli said.

Constructing another telescope larger than the 13 telescopes currently on the mountain will endanger the unique and fragile ecosystem of the island, Mangauli said. “The mountain plays a very important role in our ecosystem.”

Mangauli strives to protect the ecosystem and preserve their sacred mountain. “Every decision we make, we have to think seven generations ahead,” he said.

Mangauli closed by saying, “When you breathe that air and earth, I encourage to [go] look at yourself and think, am I giving to this earth what its given me?”

SRJC student Suechada Lindsay attended the show and shared her thoughts. “I didn’t know anything about it until he explained what the mountain really meant to him, and I understand now that they shouldn’t build the telescope. I loved all the pictures on the wall; it really made it feel like Hawaii,” Lindsay said.

SRJC student Xavier Sandoval also enjoyed the show. “I liked the show because it showed how Hawaii is viewed by its native people and not just the perspective from tourists. It’s like the deeper meaning of Hawaii,” he said.