Women of Iran: Beyond the stereotypes and into the reality 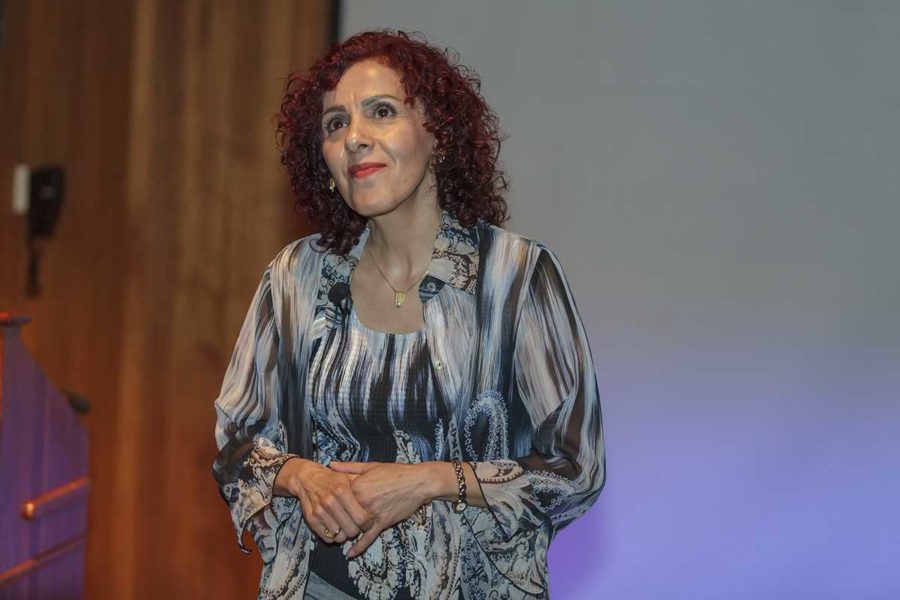 Aida Dargahi answers questions after her talk, “Women of Iran,” at the Newman Auditorium. Dargahi is an Iranian filmmaker who frequently films in Iran.

They are doctors, musicians, firefighters and even journalists. Despite the stereotypes Iranian women may face, they are no different from American women.

That was a key message professor Aida Dargahi conveyed to Santa Rosa Junior College students and instructors in her lecture “Women of Iran” Sept. 28 in Newman Auditorium.

Dargahi introduced images of how the news and the media portray Iranian women, verses who they actually are. Her reason for doing so is simple. “I want to reverse the stereotype,” she said.

Dargahi is a professor at Argosy University in Alameda. She is also an active Iranian filmmaker and professional photographer. She made the 1991 documentary “Arai”, which is based on the Khazak women of Iran.  The documentary was the winner of the Kazakhstan’s National Film Award and Iran’s 1993 Women’s Film Festival Award.

Dargahi has her master’s degree in humanities from San Francisco State University and travels to Iran once or twice a year to document the lives of women through print and film.

SRJC media instructor, Tony Kashani, introduced the lecture. He spent a couple of minutes introducing the presenter and talking about her accomplishments. Kashani said he was pleased with the outcome of the lecture.

Dargahi addressed how news and media representations of Iranian women as narrow and stereotypical. She transitioned into talking about their headscarves, otherwise known as a hijab, which is a head covering worn by Muslim women in public. Women express themselves with their hijabs, making them a fashion statement.

Just like in the U.S., Iranian women explore different jobs and roles. They are lawyers, college students, teachers, mothers, sisters, wives and much more.

The women of Iran make, produce and sometimes sell art.  They participate in plays and are writers and poets. They have also been known to collaborate with men to produce music

SRJC student Daniel Randolph said, “I didn’t realize how much [Iran] progressed as far as the roles of women.”

Along with producing music, Iranian women also attend school. “The majority of [the people in] universities in Iran are women,” Dargahi said.

In 2014, Iran had the highest female-to-male enrollment ratio in the world among sovereign nations. Men and women are not segregated; in fact they can work together in the same work place. However, some services in Iran are strictly for women, such as women-only taxi services.

Usually women ride in taxis with male strangers, but due to safety concerns, a women-only taxi service uses women drivers to help women feel safer, especially at night. This has been around since 2006 and a similar service is offered in New York.

SRJC student Andrea Castellano, who attended this lecture, said hearing about the taxi service was the most interesting part of the lecture for her.

Dargahi also discussed relationships for Iranian women.  Many might think relationships for women in Iran are completely different from the U.S., but relationships in both the U.S. and Iran are the same.  According to Darghi, they hold hands, go on dates and go to social gatherings and parties.

“This presentation helped show that they can run their own businesses.  They can do whatever,” said SRJC student Ana Ochoa.