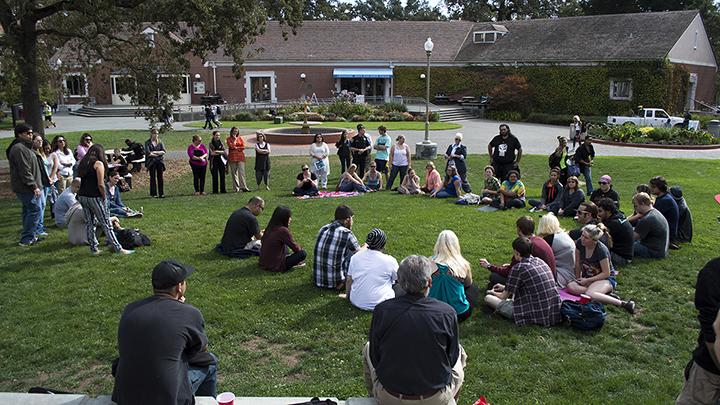 Students assemble on the quad to honor the victims of Umpqua Community College’s mass shooting.

In the wake of the Oregon shooting at Umpqua Community College, the Santa Rosa Junior College community is left to ponder a massacre that hits close to home.

“It’s so tragic,” said SRJC President Dr. Frank Chong. “It could have easily happened at the other 1,300 community colleges across the country.”

On Oct. 1, the shooter walked into his writing class at UCC armed with multiple guns and began shooting students in his class and others, killing nine and injuring nine more before taking his own life.

“The thing that made it different to me is it was a community college; this is a community college. Schools have become targets,” said SRJC English instructor Terry Mulcaire. “And nationally we are doing nothing about that. I can’t just gulp and feel terrible and go on.”

Mulcaire proposed the faculty take a day away from campus on Oct. 8. He suggested using the day to think about what happened and mourn. “[We need] to communicate to ourselves, the public and the nation: This isn’t right. We’re not safe,” he said.

He also hoped the time off would let us think not only about the shootings of UCC, but of Charleston, Santa Barbara, Virginia Tech, Newtown and many others. The idea had very little positive response from the faculty. Mulcaire said the English department had widespread support for the idea but was not sure who would follow through on it.

Philosophy, humanities and religious studies instructor Sarah Whylly also planned an event on Oct. 8. On the lawn in front of the Doyle Library, Whylly brought her religious studies class and invited others to join in on a discussion on the UCC shooting in what she called a “Love-In.” The event brought out students, faculty, SRJC Interim Police Chief Robert Brownlee, members of the Student Government Assembly and Dr. Chong.

Dr. Chong said he was glad the students were getting involved in events like these and knowing whom their community is. “We’re trying to empower the students,” he said.

After mingling for half an hour, Whylly organized a giant sitting circle and had a moment of silence for the lives lost in the UCC shooting. The group held a discussion reflecting on the massacre.

“Are we disconnected?” Whylly said in the discussion. “How many people on their first day sat down and talked to the person next to them?”

Because the killings happened at a community college, it struck a nerve with the SRJC community. Fortunately fear does not seem to be crippling SRJC.

When asked if he thought a similar event could happen at SRJC, Muclaire said, “Rationally no, this is a matter of odds. And the odds are that it won’t happen here. Emotionally, there is plenty of reason to be afraid.”

Dr. Chong says he always fears these events happening here. “It’s my worst nightmare. You try to translate that fear into being proactive,” Dr. Chong said. “We do prevention and education and do what we can.”

Chief Brownlee said the police officers come to work every day with the thought of these shootings in the back of their minds. He urged students not to hesitate calling the police in case of any emergency or to report anything suspicious.

“We are here for you and we are ready to do whatever it takes to keep you safe,” he said. The police number is 707-527-1000 and their minimum response time to get to the scene is 30-90 seconds, Chief Brownlee said.

“I’ve always felt like this is a safe community but these random acts of violence happen,” said SRJC student Jaclyn Haynes. “You could focus on fear, but focus on positive things. Things like this [the Love-In], being part of a community.”

Although a safe campus now, Mulcaire said one never knows if an SRJC student could do the same thing.

“There are students on our campus, as on every community college campus, who are close enough to the profile of the people who do these things to be alarming,” he said. “That’s an uncomfortable truth.”

According to everytown.org, since the Newtown massacre, there have been at least 142 school shootings in America, an average of nearly one a week. Americans are more likely to die by gun violence than in other developed countries.

“It’s just normal daily business to be prepared for a stranger with a gun who’s coming to kill strangers. That to me, that as part of our normal ordinary business, that we attend training on mass murders coming to our campus, that’s cuckoo. That’s crazy,” Mulcaire said. “I think we’re living in cuckoo land, to some extent now. I’m not sure if we recognize that collectively.”

According to witnesses, the shooter asked people’s religion before proceeding to shoot them, and some witness accounts say he specifically shot Christians. This proceeded to spark an uproar that this was a religious massacre, and Republican presidential candidate Ben Carson soon promoted the social media hashtag “#IamAChristian,” which quickly caught on.

“I don’t think it’s going to stop until we listen to each other,” said SRJC student Janelle Thode, who is a Christian. “It’s not so much an issue of gun rights anymore; it’s what we are doing to help each other.”

In the aftermath of tragedies like Umpqua, everyone tends to have an opinion on things people can do to fix this, locally and nationally.

“We could make this place into a prison. We could put bars around the campus, and have cameras everywhere, or electrified fences or we could arm all the teachers. We could make it into a battle zone. Prison, battle zone, fortress, it’s not a school anymore; it’s those things,” Mulcaire said.