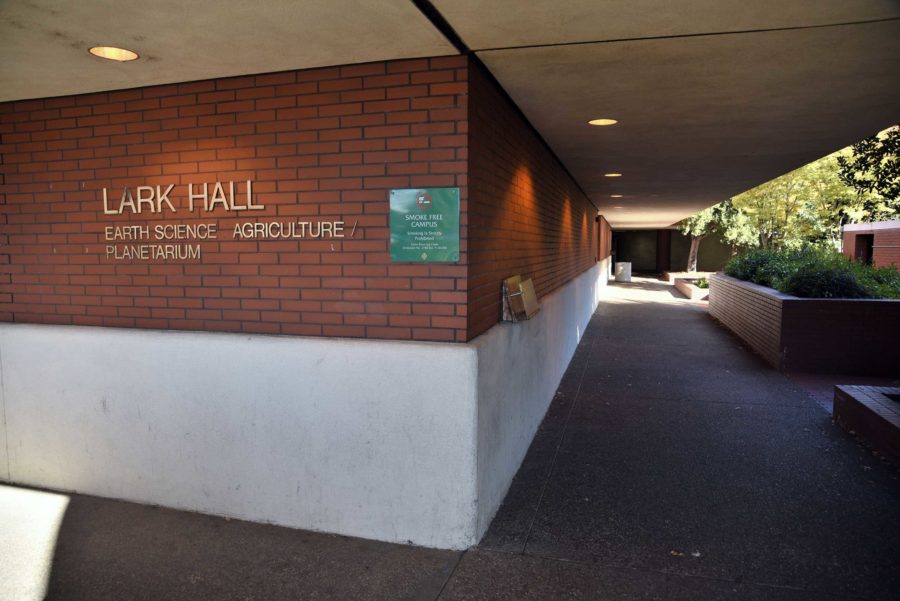 Lark Hall, the site where the suspect exposed his penis to a female student.

An unidentified man exposed his genitals and masturbated in front of a female student around 8:45 p.m. Sept. 30 outside of Lark Hall on the Santa Rosa campus, authorities said.

The victim immediately summoned campus police, who searched extensively for the perpetrator, but found no suspects.

According to the victim’s testimony, the suspect fixated on her from a drinking fountain as she sat alone. He walked away but quickly reappeared approximately 20 feet from the victim, took out his penis and masturbated.

The student said she asked the suspect what he was doing and he promptly fled, rushing eastbound into campus.

She depicted the culprit as potentially Middle Eastern, 22-24 years of age and around 5 feet 5 inches in height. He was slender with a thin mustache and dressed in an oversized white T-shirt and nondescript pants.

The suspect spoke English without an accent, according to the student.

Santa Rosa Police Department responded to a similar episode at the Elliott Avenue apartments opposite the Bertolini Student Center about 10 minutes after the Lark exposure, the police report stated.

Both police forces thoroughly combed Santa Rosa Junior College and surrounding areas but did not apprehend anyone.

District Police said the investigation is active. Those who were in the area at the time of the crime and witnessed suspicious behavior should contact SRJC District Police at 707-527-1000.

Interim District Police Chief Robert Brownlee suspects the Lark and Elliot flashers are the same perpetrator. “The fact of a similar incident happening in such a short location in a short time period after the report leads me to believe the two incidents are related,” he said.

Brownlee said he believed the exposure occurred in Lark’s quad area between the planetarium and the brick enclosed bathrooms. “It’s an easy area to get disoriented,” Brownlee said, referring to Lark’s irregular design.

A neighborhood tip-off from a nearby indecent exposure case offered SRJC police one suspect lead, but witness testimony was inconsistent with the Lark suspect’s description, Brownlee said.

In his experience, Brownlee said people who commit these types of crimes generally have a skewed sense of right and wrong, which drives them to these acts, Brownlee said. “There’s that compulsion where it’s almost forcing them to do it.”

The state stores sex offender and arsonist files in the same database because of common trends of fascination among these crimes’ practitioners, according to Brownlee.

“Flashing is, generally speaking, a power trip,” said Dr. J. Davis Mannino, SRJC psychology instructor. “Flashers are predators, searching for victims they can control. By violating the social code of conduct between individuals, the flasher throws their victim off balance — the victim is disoriented because the social contract for how humans act in public has been betrayed.”

District Police and SRPD jurisdiction overlap in this case because city police responded to the Elliot Avenue exposure.

“We work closely together. We monitor their radio traffic because something that is going on across the street from us we want to know about,” Brownlee said. “Whenever we have something, we share information with them and vice versa.”

The Lark incident came a little more than a month after a female student notified District Police that a masked man raped her in a campus bathroom. Police do not believe there is a correlation between the offenses.