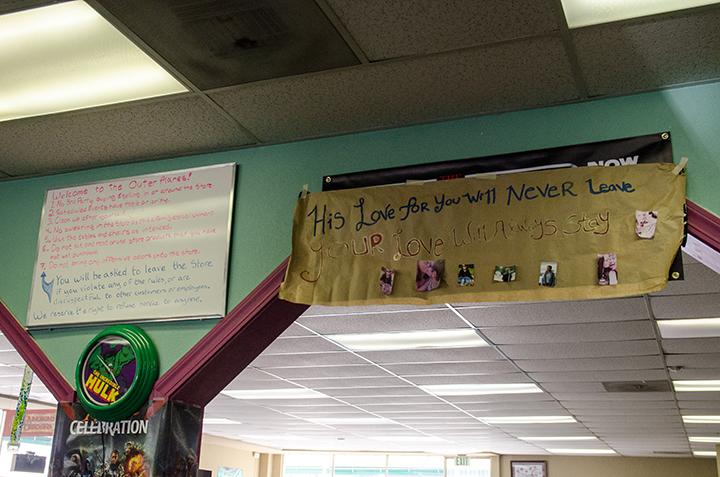 Friends and family put up signs in memory of Nick Owen at Outer Planes Comics and Games.

Cherished friend and student Nicholas Owen, 20, died from a car collision on his way to school Monday, Sept. 14.

Owen, a Santa Rosa Junior College student and graduate of Montgomery High School, was a card game enthusiast. His main game was “Magic: the Gathering,” a strategic card game where one summons creatures and spells from other planes to defeat his or her opponent.

Owen’s older brother Andy reflected on his brother’s passion for the game. “He took it pretty seriously. It was important to him to do well and play right. He didn’t let failure get in his way of succeeding and doing really well. It’s admirable,” he said.

Close friend Ken Streets also mentioned the importance of the game in Owen’s life. “He wanted to take his ‘Magic’ to the next level, an almost semi-professional level playing,” he said. “It was kind of the dream he planned to follow.”

To honor Owen, friends gathered at Outer Planes Comics and Games in downtown Santa Rosa Sept. 20 for a potluck and a “Magic: the Gathering” tournament.

“Everybody here loved him, there was no reason not to love him, just a positive guy,” Andy said of the people gathered at the tribute tournament.

Bradon Stratton, a 10 year friend of the deceased, said Owen played “Magic: the Gathering” since he was eight. “We had a good time playing, and I don’t know what else I’m going to do, who else I’m going to call, to have fun with,” he said.

Many of his card-playing friends also knew him by the name “Salty.” Stratton said Owen earned this nickname because he used to mope and complain after he lost. But the name stuck with him more out of a term of endearment and camaraderie.

“I think of him as a fierce competitor and a good friend,” Stratton said.

Streets commended Owen’s good character and caring disposition. “He was one of the better representatives of the community you could ask for,” he said. “He didn’t understand why somebody would cheat; theft never occurred to him.”

Alex Spataro, an employee at Outer Planes, said she met Owen at the store a long time ago and they became good friends. She remembered how he loved playing various sorts of face-to-face interaction games with other people.

“He was a real sweet kid, he always wanted to be friends with people before judging them. He was so willing to be everyone’s friend all the time. Probably didn’t have much of an angry bone in his body,” Spataro said.

Owen was a groomsman at Spataro’s wedding, and moved in with her and her husband for awhile when he was 18. She said he was like a little brother to them.

Spataro reminisced of Owen’s compassion and kindness, “My brother died earlier in May…my car would not make it to go visit my grandma, and I really wanted to console her…he was the first person to text me and be like ‘let’s go, let’s do this.’”

Andy noted his brother’s tenacity in the face of struggles, namely the hardships he endured with his parents. “He overcame all that stuff and didn’t let it stop him from being the best person he could be, working as hard as everybody else, if not harder, while going to school and just doing what he was supposed to do,” he said.

Christine Prager, Owen’s girlfriend, commented on his caring and free-spirited nature coupled with his determination to learn and succeed.

“He was always so curious about how and why things happened, even if he didn’t like it, even if it wasn’t working out the way he planned, he was still curious and he would still try,” Prager said.

Conner Brusseau, a friend Owen met at Outer Planes, remarked on the many friends Owen made among the community and how over time he earned their respect.

“Every time that I hung out with him it was a good time, he never stressed out over anything, super chill dude,” Brusseau said. “Just proof that bad things happen to good people.”

Owen’s kindness made an impact on the people around him, and Streets remains grateful for his late friend. “The last time I saw Nick, I was having a really hard time, and so he stayed out in front of Outer Planes and sat there on the curb with me until my ride got here, and so appropriately the last thing I ever said to Nick was ‘thank you.’”