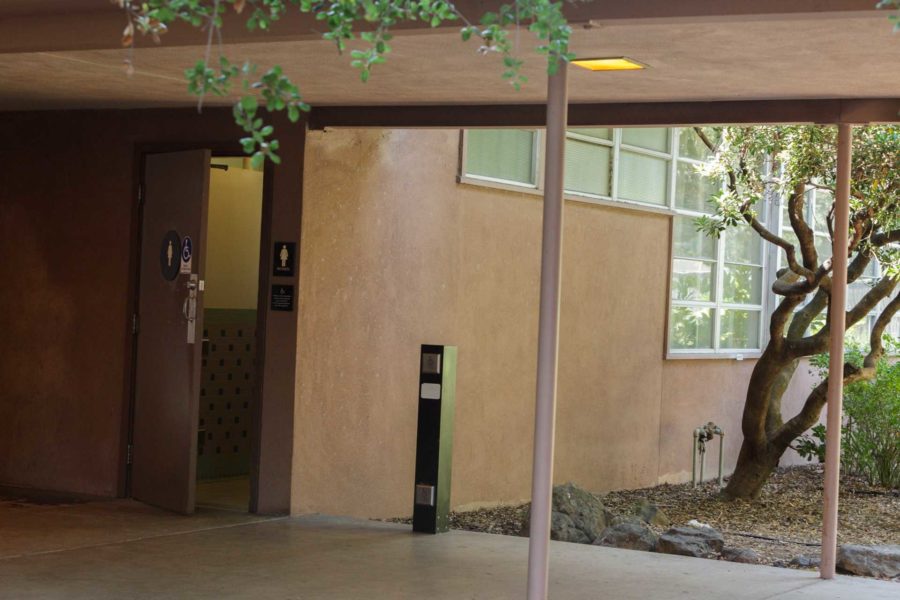 Women’s restroom at Barnett Hall on the SRJC campus. The restroom was the site of an alleged sexual assault Aug. 20.

A reported rape left the college community shocked and fearful.

Medical personnel informed campus police of the incident Aug. 25 on the victim’s behalf, according to district police.

The victim said the suspect confronted her as she entered the restroom, forced her against a wall and raped her. He then fled in an unknown direction, according to her testimony.

The victim described the suspect as male and potentially white with a stocky build and around 5 feet 10 inches. She said he wore a black beanie type mask, a long-sleeve black t-shirt and black pants. This was the extent of information she could render at the time.

A similar rape occurred on the Napa Valley College campus around 2 p.m. on Monday, Aug. 31.

According to NVC police and the victim’s statement, the suspect confronted and sexually assaulted a female student in the bathroom and fled in an unknown direction.

Though there has been speculation among the Santa Rosa and Napa Valley communities, Sgt. Terry Anderson with the SRPD Special Services Division Investigations Bureau said they don’t believe the two incidents are related based on the victim’s reported heights and weights of the two suspects.

Brownlee said his department is working in collaboration with SRPD, which is heading the investigation because their resources are appropriately suited for a case of this magnitude. “In Sonoma County law enforcement, in general we work in partnership,” he said. “We are in close communication with SRPD.”

In the wake of this incident Brownlee said district police will expand their evening surveillance. “For the time being we are going to beef up our night patrol.”

According to SRJC district police, there are no cameras on Barnett Hall specifically, though there are some in the area. Student cadets regularly patrol the buildings that lack surveillance cameras until midnight, SRJC District Police said.

Brownlee said he spoke with the SRPD detective in charge of this investigation the night of Aug. 25 and said there are no new developments in the case to his knowledge.

Brownlee implored all students to report suspicious activity to the campus police.

SRJC student President Joshua Pinaula expressed his alarm and concern regarding the incident.

“I feel horrible. The SGA [Student Government Assembly] is going to meet to figure out how to effectively campaign against sexual assault and help students feel safe,” Pinaula said.

He added that the student health branch of the SGA is creating a sexual assault awareness initiative with emphasis on reporting incidents and protecting those with information. “I feel ashamed as well; we need more cameras in public areas,” he said.

“We are going to do everything we can to make SRJC a safe environment as possible for all of our employees and students,” said SRJC President Dr. Frank Chong.

He also said, “We are providing the necessary support services to the victim.”

These services include the support service of Verity, a non-profit that provides sexual assault counseling, prevention and intervention and provides a crisis hotline. This is consistent with the district police’s report.

“I met with my senior administrative team and district police on Wednesday, Aug. 26 to assess the situation and develop a plan of action,” Dr. Chong said in an email to faculty and staff. “Though such incidents are rare on our campus, we take them very seriously and are committed to preventing all sexual assault.”

Dr. Chong said he met with the Feminist Club on Aug. 26 and plans to coordinate with the members and other student led groups to address this issue and prevent future assaults. “We have a relatively safe campus and we want to keep it that way.”

In response to the rape incident, a group called Damsel in Defense is organizing a self defense workshop to inform participants on how to protect themselves when attacked and will be selling pepper spray, stun guns and other self defense tools. The workshop will be at 4 p.m. Sept. 26 on the Santa Rosa campus.

Dr. Chong developed and released a four-point plan to maintain health and safety on campus. His plan includes offering free and confidential counseling to any students and employees affected by this incident, offering workshops about preventing sexual assault and maintaining personal safety, increasing police presence on campus and implementing an internal review of campus security after hours.

Anderson said there is no other new information regarding the investigation as of Sept. 14.

All information relevant to the investigation should be submitted to SRPD Sergeant Terry Anderson at (707) 543-3598 or email [email protected]; or SRPD Detective Stephen Bussell at [email protected].