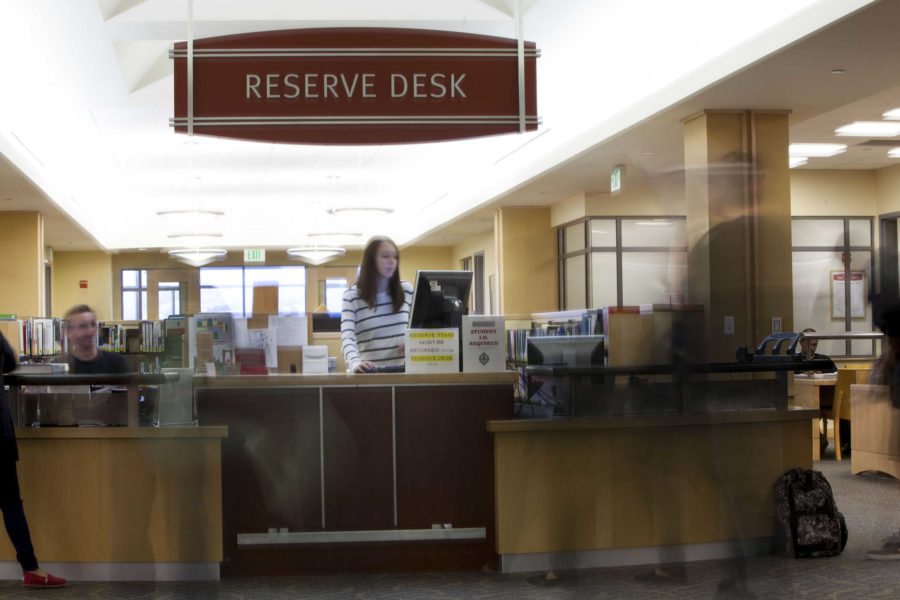 Students now have better access to a variety of essential textbooks on reserve at Santa Rosa Junior College libraries thanks to funding by the state’s Student Equity Program last spring.

The California Community College System (CCCS), in addition to SRJC’s Student Success and Equity Program, has allocated a dramatic influx of $40,000 in funds to the school’s libraries.

SRJC library reserve desks contain materials instructors require their students to read for their course. Reserve items are given shorter borrowing times compared to other library texts due to the high demand and short supply of the texts.

Blatt uses the reserve books regularly and intends on only using reserve books for his classes. “This semester I don’t plan on buying any books,” he said.

Prior to the state’s increase in funds, Persons said Doyle Library received only $1,000 annually from the school’s Foundation account, and Mahoney Library received less, resulting in a shortage of reserved books that students can check out for two-hour library use only.

“The funding has allowed us to add some additional copies with longer loan periods, allowing students to take textbooks out of the libraries and to classes,” Persons said. “In addition, it was not possible prior to funding to have multiple copies of high demand textbooks, and we were still lacking any copies of some of the most expensive textbooks.”

Not only is it important for students to know about this cost-saving alternative, but Mahoney librarian Samantha Lange also wants to hear directly from students.

“If there is a textbook or book they can’t afford or need for research, I hope students would let a librarian know,” Lange said. “We are striving hard to build our book and textbook collection to serve the students.”

Though the new funds have helped the libraries obtain more titles and popular texts, Dean of Learning Resources and Educational Technology Alicia Virtue said more funds are needed to meet the demands of costly textbooks.

According to Virtue, Doyle Library was only able to purchase 200-plus textbooks with the $26,000 the library received. “We hope to receive more funds so that we can continue to alleviate demand.”

With instructors giving their students information about the texts they put on reserve and the college’s persistent advertisement of this resource, Virtue said the problem is less about students knowing about the reserve desk and more about the high cost of books and the short supply of them.

According to Virtue, the SRJC libraries’ reserve desks circulated textbooks 28,966 times last year. And a CollegeBoard report of the 2014-15 academic year stated community college students spent an average of $1,328 on textbooks alone.

“We are so grateful for the Student Equity funds and are hoping to receive additional support since we know what a difference this makes in helping students access the high cost materials they need when registering for classes,” Virtue said.

Despite the funding from the Student Equity program and the Foundation account, the majority of textbooks on reserve are “desk copies,” meaning they come directly from instructors.

“We rely heavily on instructors bringing us complimentary copies they receive from the publishers because our textbook budget has been minimal in the past,” said Santa Rosa campus library technician Suvi McGee.

A lack of consistent and plentiful funding isn’t the only hindrance in the libraries’ ability to best serve the students’ needs. According to McGee, loose-leaf editions of textbooks are not traditionally purchased for the reserve desks due to the sheer volume of check-outs; so the bookstore has to special order paperback or hardcover copies instead.

According to McGee, the majority of the approximate 200 textbooks purchased for Doyle Library will be available on the first day of school, Aug. 17, and the rest should arrive during the first week of the semester.

While some of the new materials for the Petaluma campus are now available to students, librarians are currently awaiting 83 copies of 62 individual titles covering 42 Petaluma courses, Rau said.

McGee said she encourages any student to go to the reserves desk at either Doyle or Mahoney and speak with her or Rau about a book they may be looking for. They will also try to purchase any textbook not yet acquired if there is a demand for it.

“Our primary motivation is to let students know we are here to support them, that they can borrow textbooks from us and they CAN in fact persist in achieving success here at SRJC,” Persons said.