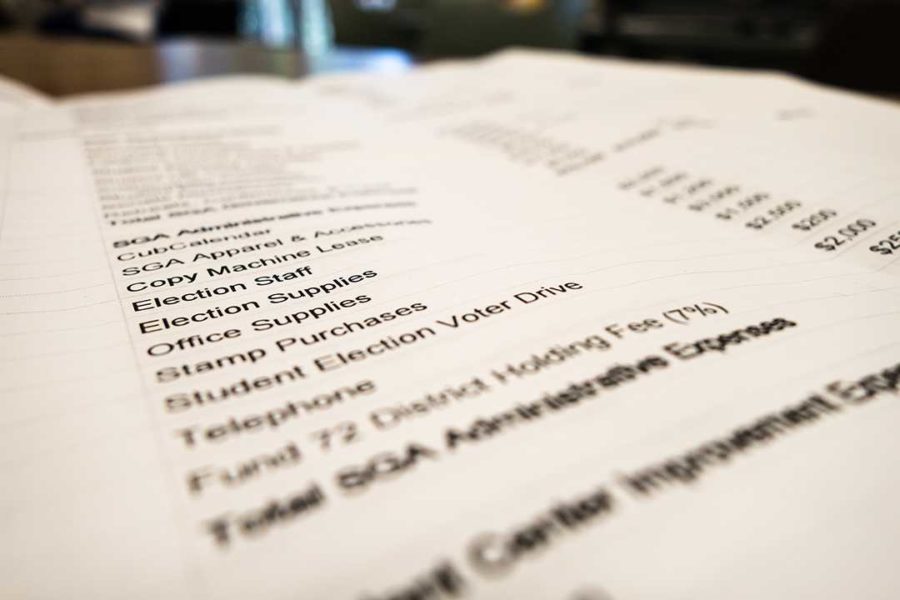 The Student Government Assembly (SGA) looks over the proposed budget for the academic school year, which may include paying the student representatives.

A May 8 version of the budget outlines SGA’s Senator compensation through monetary awards dispensed quarterly in an academic year. The budget is due May 11 at the final SGA session of this academic year. A budget passed by senate majority would go to the college’s board of trustees for approval.

There are 13 student elected SGA members and one student trustee entitled to payment in the propsed budget.

The budgetary committee and SGA categorized the “Public Service Fellowship Program” in student awards. The account totals $22,000 in the 2015-16 fiscal year according to the draft. The Student Representation Fee will fund SGA pay.

SGA President Joshua Pinaula said paying student representatives would increase senate accountability. “Because we are volunteers, we can let a lot of things slide,” he said.

Pinaula said the problem with the SGA’s volunteer basis is “These positions attract people who are doing way too much work.” He said the stretched students who serve on the SGA generally drop their volunteer obligations first when their schedules overload, which he believes impairs the effectiveness of student government.

Another concern Pinaula expressed is without a form of compensation, many dedicated and involved students cannot justify commitment to the demands of the SGA. He said several members of the Student Ambassadors, employees and volunteers in the Student Affairs office, told him they were interested in running for the SGA, but couldn’t afford the attached responsibilities in the absence of payment.

Senator responsibilities include sitting on at least two committees, holding meetings and conducting business related to their office and providing weekly reports in their agendized sessions. Pinaula estimated SGA members work in the range of 10- 30 hours a week.

Pinaula said he and other senators dislike the compensation coming from an award on the grounds that it lacks transparency. They would prefer a payment medium that clearly indicates compensation.

Ethington said his relationship with the SGA would transform from advisor to overseer, and the transition would bring more formalized oversight.

“Paying yourself [SGA Senators] is a huge change. People aren’t ready for that yet because they don’t even know it’s coming,” Ethington said.

Ethington cautioned the SGA to frame budgetary senate compensation in terms agreeable to the board of trustees. “If we jump out of the gate with something way too ambitious with no accountability mechanism, it’s not going to work,” he said.

A form of student compensation Ethington said the administration would probably support is pay for students on committees.

“In this college’s almost 100-year history, they have never paid volunteers in student government,” Ethington said.