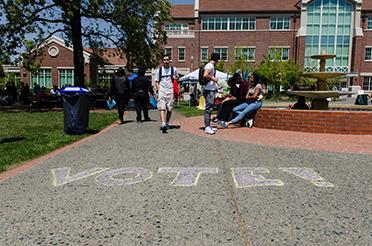 Students vote in the quad during the spring 2015 election, which had the highest voter turnout in SRJC history.

The Justice League slate, a group of students running on a diversity platform, won all multi-candidate senatorial races in Santa Rosa Junior College’s Spring 2015 student elections. Students also voted to pass a student center referendum and an amended constitution, according to the Student Affairs office.

Results are still pending Associated Students (AS) Senate confirmation, which the body will render in its April 27 session.

Only three of the 11 elected AS Senate chairs had more than one candidate so the majority won by default.

All nine Justice League candidates gained election, defeating the opposing Avengers slate in the two races where both slates had candidates.

“I look forward to joining a fantastic community of student leaders to make SRJC a better place for all, especially students. Now is the time for deep institutional improvement. Power to the students,” Kingsbury said.

Incumbent AS Vice President of Programs Virginia Kerr, who won reelection in the April 20-24 elections, said the two slates have mostly congruent goals.

Kerr said the Avengers, who primarily are incumbents, have objectives aimed at more bureaucratic changes while the Justice League, with only two incumbents, are more ideologically oriented.

According to the slate’s literature, the Justice League formed when students from M.E.Ch.A. (Movimiento Estudiantil Chicanista de Aztlan), the Black Student Union (BSU), the sitting AS Senate and other organizations united to enact institutional change at SRJC.

“As club officers and community organizers with countless leadership positions on campus and in our communities, we will bring an abundance of experience and knowledge to student government,” stated Justice League literature. “As students we are the most active and vital force in society, and as a united student body, we will create real change.”

The slate said it would labor to expand English Second Language (ESL) courses at SRJC and increase health services for non-credit students, among other goals.

In addition to electing 11 student senators, SRJC’s students elected a student trustee to sit on the college’s board of trustees with an advisory vote.

Trustee-elect Eli Egger, speaking to the SRJC student body said “Thank you for electing me to become your Student Trustee. I have already tripled funding to the PTK Hungry Cub, our student food pantry, and now it is time to begin a college-wide discussion about textbooks. I believe every course should have multiple copies of required books on reserve at the library, and royalty-free books should be used whenever possible.”

Egger is the sitting AS executive vice president.

Students elected in a 3,180 to 1,263 vote to approve a student center referendum, which is a $1 per-unit enrollment fee with an annual 10-unit cap. The revenue from the fee will be allotted to student community outlets at the AS Senate’s discretion.

AS President elect and sitting incumbent Joshua Pinaula said, “In regards to the student center fee, I’m committed to ensure those funds are used correctly and with the input of the student body.” He said the main reason he ran for reelection was to employ experience in the student center fund’s allocation.

The ratified student constitution, when implemented in Fall 2015, will rename the student senate the Student Government Assembly (SGA) and call for new senate bylaws, which are internal operation rules. The constitution enlarges the student senate by two positions, which the SGA will initially appoint in Fall 2015. Elections for those seats will start in Spring 2016. Senate position titles will also change.

“There is an awareness issue with this organization in general and I feel like the college itself isn’t necessarily aware that elections happen every year, regardless that it is about the same time every year,” Miranda said. “It’s on us. As an organization we need to do as much publicity as we can to make sure students do turn out to polls.”

Election coordinator Anson O’Rourke-Sargent said he was disappointed by candidate activity in the campaign. “I was hoping the candidates would engage with the students a lot more but they really haven’t done that.”

SRJC board of trustees’ member Jordan Burns said he is pleased with the election’s turnout. “Slowly the student elections are progressing towards more people involved. I think if they continue to reach out to the community, continue to take up very important issues like the student center fee and things like that you’ll see more students getting involved.”