Redistricting: Board of Trustees grapple with racially equitable district areas 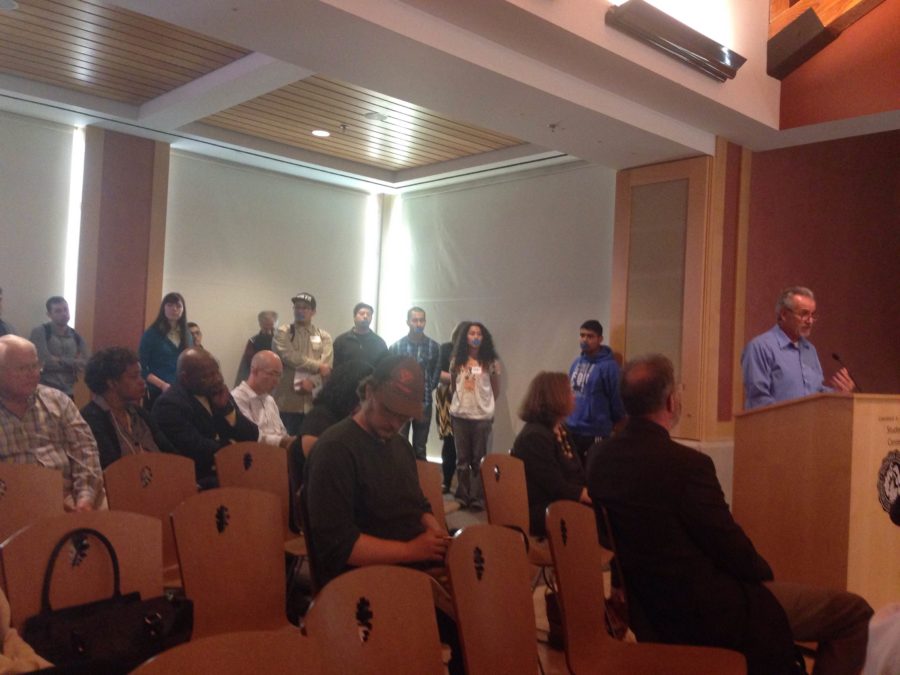 Some M.E.Ch.A students wear tape over their mouths to symbolize lack of voice.

The board called the session to reevaluate the Santa Rosa area of the district or subdistrict 3, 4 and 5.

The SCJCD is divided into five areas, four of which have one elected trustee representing about 70,000 constituents.

However, the Santa Rosa area, encompassing more than 200,000 constituents, has three elected trustees who each represent the area collectively.

The SCJCD was originally an extension of Santa Rosa High School District. It gained autonomy in 1930, initially with three trustees elected from the Santa Rosa area and two from Analy in West County. The district grew to include the Petaluma, Sonoma Valley and Cloverdale areas.

The three Santa Rosa trustees attain office through at-large elections, in which the entire constituency elects all trustees. The trustees’ terms are staggered in two-year intervals so at least one seat is in play every election cycle.

The Santa Rosa area is three times larger than the other subdistricts and stretches from northern Santa Rosa into Roseland, Rohnert Park and Cotati.

The size of the Santa Rosa district makes it an incredibly expensive area to run for a trustee position, in concurrence with the steep income disparities between neighborhoods like Fountaingrove and Roseland institutionally favor wealthier candidates.

Proponents of redistricting suggest the Santa Rosa area be divided into three separate regions reflecting the diversity of the area, each with its own elected trustee. The resolution would arrange the subdistricts into proportionate trustee constituent ratios.

SRJC’s student body is more than 25 percent Hispanic, qualifying it as a Hispanic Serving Institution (HSI). The HSI status entitled SRJC to a $2.65 million federal grant in August.
Supporters of reform contend the at- large system mitigates minority voice, particularly of Hispanic residents, who make up about 30 percent of the district, according to former SRJC Associated Students president and redistricting activist Jessica Jones.

The Santa Rosa area has had only one Hispanic trustee in its 85-year history. Appointed to the board in 2004, Frank Briceno ran for reelection in 2006 and lost.

In her presentation, Jones said the standing district paradigm underserves Hispanic SRJC students. “Trustees from this area are not adequately representing the community,” Jones said.

The session’s purpose was partly to see if the multi-district system, having both at-large and direct district elections, complies with pertaining laws.

The California Education Code states community college governing boards constituted by trustee areas face appointed redistricting “to adjust for population changes that have occurred since the last redistricting to ensure that each ward has equal population to maintain one-person-one-vote.”

The Education Code permits multi-trustee districts depending on demographic makeup and other factors like district shape and population.

The California Voters Rights Act (CVRA) requires college boards with at-large systems to monitor racially polarized voting and stipulates that at-large systems “may not be imposed or applied in a manner that impairs the ability of a protected class to elect candidates of its choosing.”

Technically, any district with multiple trustees elected by the entire constituency violates the CVRA if it could be redrawn to “enable a protected class to influence the election.”
Associated Students President Joshua Pinaula said, “The reason these laws are in place is to protect diverse communities.”

The session was not a board meeting so it could take no action, however trustee Jordan Burns publically suggested forming an ad-hoc committee to address redistricting.

The School and College Legal Services of California and the Community College League of California both rendered input on redistricting, mostly reiterating voting laws and reviewing redistricting history in the context of SRJC’s needs. They will continue to evaluate legal considerations and communicate with the board.
SCJCD legal council Margaret Merchat said, “The safe harbor is to have one trustee per district.” Merchat acknowledged the complexity of just trustee districts and said at-large systems don’t necessarily discriminate. She said other factors like voter registration and turnout also have weight.

“I think it gave us all the information we need,” Student Trustee Omar Paz said after the session. “I want us to take action as soon as possible.”

SRJC president Dr. Frank Chong said he thought the session was productive. “We will do something thoughtful,” he said.

Burns said he wants community involvement going forward and to learn more about redistricting costs. “I think it’s a very important issue for the board,” he said.

SRJC student Diana Kingsbury said, “People actually care about fairness and equality.”
She thought the session was hopeful and showed how engaged the community is.

Hasting Law School professor Robert Rubin encouraged the board to redistrict now. “If not you would disempower voters,” he said. “It’s about protecting the voter, not the candidate.”