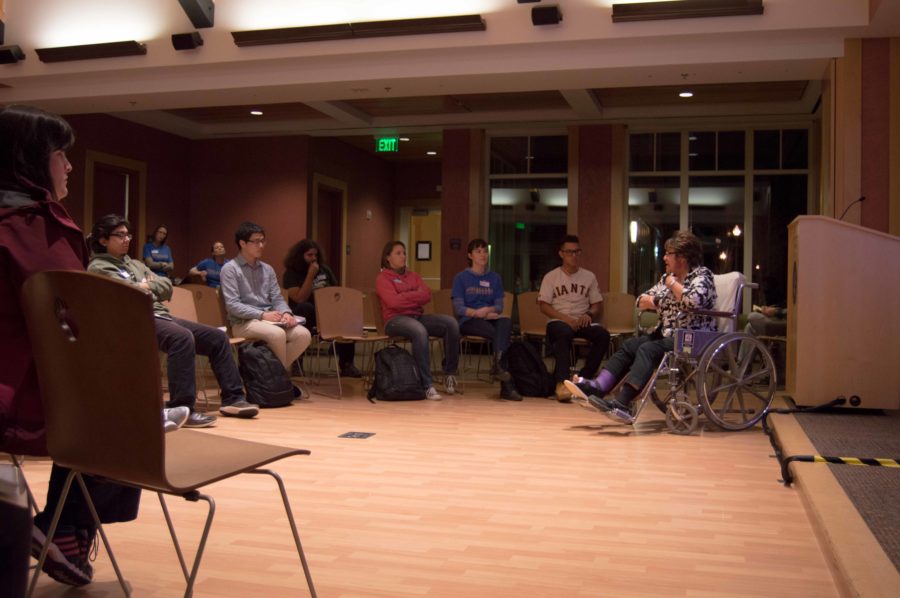 SRJC child development instructor Dr. Elisa Velasquez-Andrade addresses SRJC students about how to overcome obstacles and to focus on your good traits and strengths.

The People Empowering Each Other to Realize Success (PEERS) Coalition at Santa Rosa Junior College provided a safe space in the Bertolini Student Activities Center for students of various backgrounds to discuss how culture impacts identity and mental health on Feb. 5.

The workshop, titled “Who Am I? – Culture, Identity & Mental Health,” began with the general rule that everyone should be respectful towards one another as discussions delve into the complexities that make up one’s identity and cultural background.

Elise Krawchuk, 34, a member of PEERS, conducted a group activity in which the audience wrote down words they thought others might label them with, and then wrote down words they identify with themselves. Krawchuk then facilitated an open discussion for people to share some of the proudest moments in their lives.

PEERS Coalition coordinator Stephanie S. Sanchez noted with a vast topic like diversity and culture, it’s best to start with self-reflection and then expand outwards to connect with people from all cultures who have similar traits.

Dr. Elisa Velasquez-Andrade, SRJC child development instructor, described in her presentation the importance of focusing on one’s strengths and good traits rather than  weaknesses. Although barriers surround different cultures and disabilities, there’s still a way around them.

Even temporarily confined to a wheelchair, Velasquez-Andrade never harps on her obstacles, but instead figures out how to overcome them. “I can do everything, just in a different way,” she said.

This persistence to overcome hardship is rooted in Velasquez-Andrade’s culture, as in many others. She describes the biracial challenges and cross-cultural barriers involved with understanding others of different backgrounds and how these factors may affect mental health.

Mental health is treated differently in various cultures, and in America, mental health issues are often stigmatized. Ferreyra said people with mild depression or anxiety are often labeled as crazy and this could impact their decision to seek help.

With social stigma preventing people from seeking behavioral health care, PEERS notices the importance of speaking out about these issues to combat the misconceptions about mental health and providing resources for people to get the help they need.

Jeane Erlenborn, health promotion specialist with SRJC psychological health services, noted how beneficial the PEERS coalition has been to health services in terms of combatting stigma and promoting awareness. “PEERS has added so much to health services; they brought in a lot of creativity and energy,” she said.

The members ended their workshop by upholding the ideal of cultural competency: to interact with people of various cultures effectively and comfortably with patience, humility and a willingness to change negative attitudes.

SRJC student Oscar Carillo Ramos was impressed by the aptitude the speakers presented and the overall message promoted. “I have a lot more awareness of people who are just like me who want to overcome fear of what people might think,” he said.