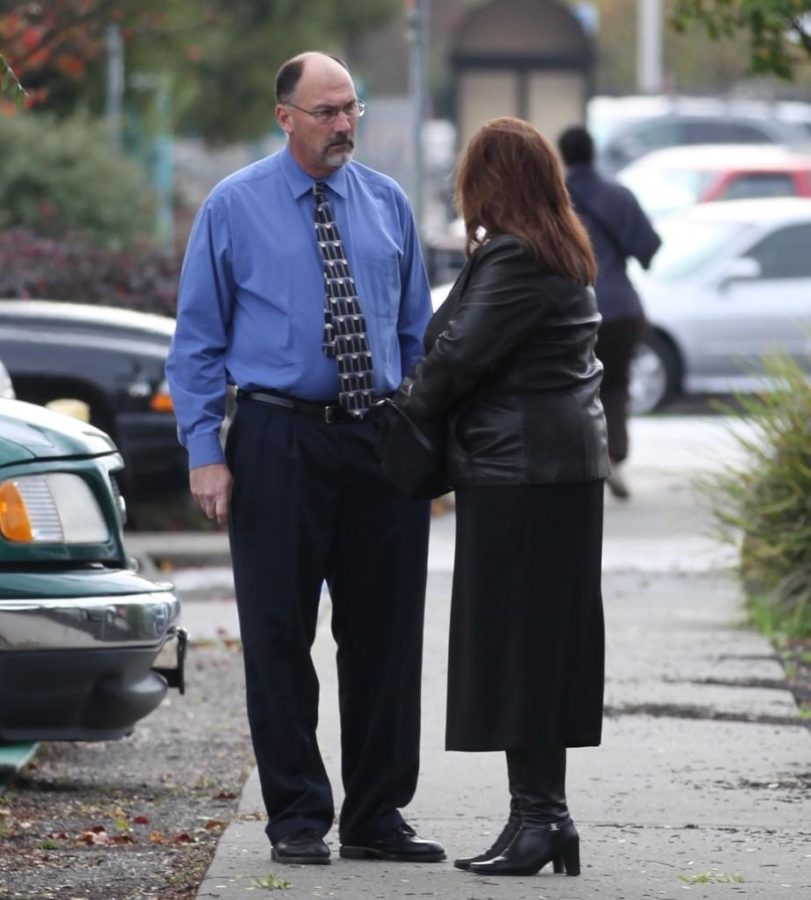 Jeffrey and Karen Holzworth standing outside the court, discussing the trial on Dec. 2012

Karen Holzworth is on trial for being an accessory and knowingly receiving stolen property.

Former SRJC police officer Jeffrey Holzworth was convicted of grand theft and embezzlement in May and sentenced to four years in prison for stealing $286,000 from campus parking meters and pay stations between 2005 and 2012.

Proceedings began on Feb. 6 with a hearing of the four jail phone calls made between Jeffrey and Karen Holzworth while he was in custody. The first thing he said on the first call was “I’m in big trouble, Karen,” with her response being, “Are you f—— kidding me?” Jeffrey Holzworth admitted, “It’s all me and I’m very sorry,” on the first call.

In the second call Jeffrey Holzworth said, “You knew but you told me to stop doing it and I didn’t listen.” Later he said again that it’s all on him, with Karen responding, “Yeah but I knew about it. Doesn’t that make it on me too?”

Santa Rosa police detective Mark Azzouni testified Feb, 5 and 6. Azzouni followed Jeffery Holzworth for several weeks before he arrested him. He initiated the search warrant of the house, but was not part of the search.  While Jeffrey Holzworth was in custody, Azzouni requested copies of the phone calls between the Holzworths and seven years of bank records from 2005-2012.  After compiling several spreadsheets of their bank records, Azzouni made the assumption that Karen Holzworth was associated with her husband’s theft of parking money.

Natalie Brandon, the Redwood Credit Union bank teller that the Holzworths used almost exclusively, testified Feb. 3 and 5. Brandon read transaction receipts showing both the Holzworths would regularly deposit large amounts of small bills and coins several times a month to a joint bank account. Sometimes they would exchange the amount deposited for larger bills such as $100.  Karen Holzworth would also deposit smaller amounts of small bills into her personal bank account there.

Defense attorney George Boisseau questioned Azzouni about his observations during his investigation of Jeffrey Holzworth. In November 2012, he and other officers followed Holzworth before he left home, all day at work, once he returned home and sometimes later into the night. They observed him remove money from the parking meters and take it to the house and bank. They never followed Karen or watched the house once Jeffrey left, but saw them together on occasion. Azzouni never observed them taking money together or Jeffrey giving money directly to Karen.

Santa Rosa Police Department officer Christopher O’Neill testified Feb. 5 that he was one of the officers who searched the Holzworths’ house in November 2012. On a bedroom counter he saw four large containers, two of which were filled to the brim with coins. In the master bedroom, he searched a nightstand that contained a small stack of cash, some SRJC campus police patches, a Playboy magazine, and paperwork in both Karen and Jeffrey Holzworth’s names. Once he had finished his part of the search, he aided another officer in the search of the garage.

“I found eight white canvas bags that I later found out had over $4,000 in cash inside,” O’Neill said. During the time of the search, Jeffrey Holzworth was in custody, and Karen Holzworth was not present.

Boisseau argued that the photos mixed together both Karen and Jeffrey Holzworth’s items instead of photographing them separately.

“They are easier to photograph that way.  Sometimes they are photographed where they are found,” O’Neill said.

In the nightstand, there were several dollars in pennies mixed in with the other coins. “I don’t think SRJC parking meters take pennies,” O’Neill said.

Boisseau used this fact to hint that the containers could hold normal change, not necessarily stolen change from the parking meters.

Also in the nightstand with the money were several cards advertising scantily clad female escorts, which Boisseau  showed as proof this was Jeffrey’s drawer and possessions, but O’Neill declined to make that assertion.

Steffans, the team leader of the home search, found Karen Holzworth’s personal diary and “things of female nature,” in a second nightstand. She also found $585 in $1 and $5 bills, the denominations that SRJC parking pay stations accepted. Also found in the drawer were empty coin wrappers and additional notebooks with gambling notes.

O’Neill was the officer tasked with counting all of the seized money in the house.  The total was $10, 212.85.

Azzouni concluded his testimony on Feb. 6 and DA Amy Ariyoshi rested her case. After deliberation between the judge and the attorneys, the defense will resume its case at 9:30 a.m. on Monday, Feb. 9 in Courtroom 4.