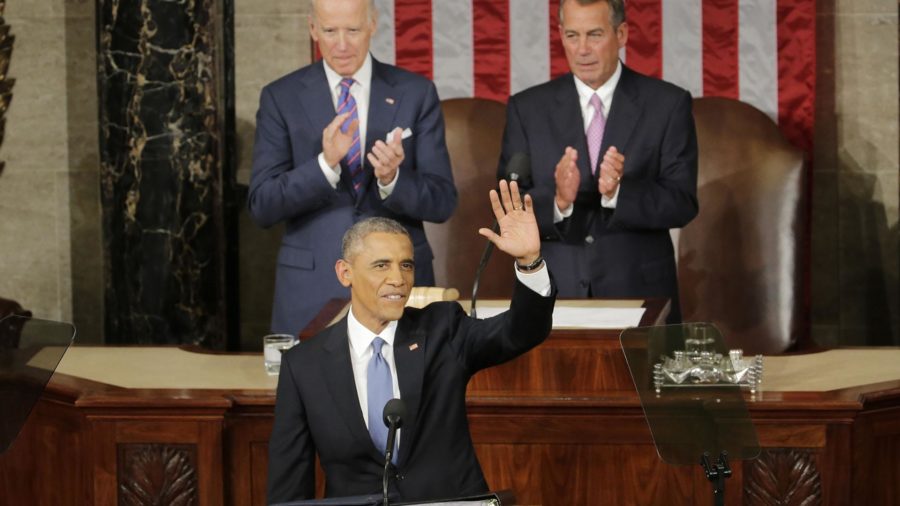 President Barack Obama waves before giving his State of the Union address before a joint session of Congress on Capitol Hill in Washington, Tuesday, Jan. 20, 2015.

In his sixth State of the Union Address, President Obama presented an ambitious and optimistic plan for America’s future on Jan. 20 that called for decisive bi-partisan governance and swift movement on issues like climate change, strengthening the middle class and renovating domestic infrastructure.

The President began by acknowledging the economic growth and recovery that transpired under his administration since the financial crisis of 2008.

“The shadow of crisis has passed and the state of the union is strong,” Obama said.

He reflected on his administration’s last six years with confidence. “At every step we were told that our goals were misguided or too ambitious. That we would crush jobs and explode deficits. Instead we have seen the fastest economic growth in over a decade, our deficit cut by two thirds, a stock market that has doubled, and health care inflation at its lowest rate in 50 years.”

The President firmly warned Congress that he would veto any bills that hindered the health insurance expansion of The Affordable Care Act, his immigration initiatives, and Wall Street regulations.

Addressing the issue of equal pay for equal work, Obama said “This congress still needs to pass a law that makes sure a woman is paid the same amount as man for the same work. It’s 2015 it’s time.”

He went on to advocate for his initiative to mandate employers to provide their employees with seven guaranteed paid sick days as well as for Congress to pass laws that affirm unions and provide support for the middle class.

“Things like child care and sick leave and equal pay. Things like lower mortgage premiums and a higher minimum wage. These ideas will make a meaningful difference in the lives of millions of families, and that’s a fact,” Obama said.

“I am sending this Congress a bold new plan to lower the cost of community college to zero,” he said.

He prompted Congress to adapt America’s infrastructure to the 21st century and the changing business environment, with such suggestions as modernizing ports and building faster and more efficient trains.

The President chastised his political adversaries about the controversial Key Stone Pipeline that the House voted this month to build and that the president has vowed to veto. “Lets set our sites higher than a single oil pipeline,” he said.

He also recommended that the U.S increase its export industries and make the U.S the breeding ground for production, as well as a dominant power in innovation.

“Twenty-first century business will rely on American science and technology, research and development,” he said.

In his address the President defined “Better Politics,” “A better politics is one where we debate without demonizing each other. Where we talk issues, and values, and principles, and facts, rather than gotcha moments, or trivial gaffs, or fake controversies that have nothing to do with peoples daily lives,” he said.

Obama addressed his Republican colleagues. “I commit to every Republican here tonight that I will not only seek your ideas, I will seek to work with you to make this country stronger.”